War Communism refers to policies, particularly economic, pursued by the Bolsheviks during the Civil War in response to the ideological and pragmatic demands of consolidating power. It was abandoned in 1921 amidst economic catastrophe and political revolt but left a lasting legacy in the form of the one-party state and centralised economy.

The term "war communism" usually refers to the period from mid-1918 to early 1921 when the Bolsheviks were attempting to consolidate power while fighting a brutal Civil War. It is used in particular to denote the economic policies of the Bolshevik Party, including forced requisitioning of foodstuffs, redistribution of land, nationalisation of industry, state management of production, centralisation of resource allocation, state monopolisation of trade, partial suspension of money transactions and the introduction of strict labour discipline. It is also associated with the radicalisation, militarisation and bureaucratisation of politics, the institutionalisation of the one-party state, increased exertion of party discipline, the repudiation of the political and cultural autonomy of civil society, and the intensification of repression in a vigorous class war.

Historians disagree, however, over what policies and practices constitute the key features of war communism, as well as over the timing of its introduction and even the usefulness of the term itself. These disputes have often been connected to debates about the role of ideology and pragmatism in measures implemented by the Bolsheviks in the Civil War period. Historians such as Lars Lih have shifted the debate to an examination of the roots of war communism in the centralising and mobilising wartime economies which developed in a number of countries, including Germany as well as the Russian Empire itself, between 1914 and 1918.

In Soviet and Western literature there have been two dominant approaches to the policies of war communism, one focussing on ideological motivations and another stressing the pragmatic context of wartime economic emergency. These interpretations were often inseparable from broader conclusions about the origins of Stalinist totalitarianism or the enduring hallmarks of the Soviet system and potential for reform. The debate was complicated by the fact that both sides could quote statements by Vladimir Lenin (1870-1924) and other Bolsheviks in support of their arguments. Policies such as the nationalisation of industry, furthermore, could be plausibly explained as either ideologically motivated or as a response to practical problems. Some scholars, especially in the west, concluded that war communism was a mixture of improvisation in the face of emergency and application of socialist dogma.

When the Bolsheviks seized power they took over a war economy in a state of near collapse and set in motion events that led to the waging of a lengthy Civil War. In 1917 large and medium-sized factories produced about two-thirds of the output compared to 1913 and in 1918 the economy continued to face the onslaught of transport breakdown, inadequacy of raw material supplies, dislocation of the financial system, a capital investment shortage and unchecked inflation. The signing of the Treaty of Brest-Litovsk in March 1918 and Russia’s withdrawal from the First World War meant the Bolshevik government lost territory on which two-fifths of the country’s industrial resources had been concentrated. Financing for armaments production was temporarily halted, causing disruption as war-orientated factories were slow to convert to civilian work. Production fell again to a third of the 1917 level. Grain deficits were exacerbated by the lack of industrial goods to exchange with the countryside. Rapid descent into Civil War dislocated the economy further, cutting off urban areas such as Moscow and Petrograd under Bolshevik control from many of the grain-producing areas and requiring resources to be directed towards the efforts at the front. In this context, the expansion of the nationalisation of industry to the whole sphere of production served to make valuable stocks publicly available. Practices of forcible grain requisitioning and monopolisation of supply distribution were intended to ensure minimum levels of food reached the Red Army and the starving cities.

The Bolsheviks seized power with the aim of totally transforming economic and social relations in order to build socialism and prepare for a transition to communism. The period of war communism was one of immense hardship and also of wild revolutionary enthusiasm for leaping forward into the new society. Although both Karl Marx (1818-1883) and Lenin avoided providing detailed programmes for this transition, the party possessed a set of principles that shaped their choices once in power. These principles incorporated goals such as the abolition of private property and the free market and were marked by a political thinking revolving around class and a preference for centralisation and maximisation of state control. Food requisitioning in the countryside was carried out as a matter not just of securing supplies but also of conducting class warfare. The Bolsheviks set up rural poor committees, for example, on the mistaken assumption that poor peasants would collaborate with the central organs of food procurement to extract surplus from wealthy peasants. Some aspects of labour mobilisation, such as the mass mobilisation of the urban population in unpaid Saturday and Sunday work, had greater symbolic significance than economic, providing a means of extolling communist labour among the general population, instilling discipline in party members and striking a blow against organised religion.

Since the 1980s a number of historians have emphasised the complex interactions between pragmatism and ideology and the twists and turns taken in the elaboration of individual policies. In the case of the movement towards a moneyless economy, for example, ideology served to justify practical imperatives. As the food crisis in the towns worsened and money lost its value, barter became a widespread form of exchange and wages were frequently paid in kind. This was hailed by some Bolsheviks as the "withering away of money" under communism. In the development of other policies, ideological principles and wartime emergency acted to reinforce each other. The deepening central direction of the economy suited the Bolsheviks both as the antithesis of anarchic capitalism and as an effective means of channelling supplies to the military. Ideological and practical imperatives did not always neatly converge, however, and sometimes worked to constrain each other. The principle of egalitarianism in wages was never really pursued, in the interests of maintaining material incentives for higher productivity. Ideological preferences ruled out certain practical fiscal measures to increase food procurement under war communism, such as higher payments to the peasantry for grain.

Other factors influencing the regime between 1918 and 1921 include Russian political legacies and the international context of the First World War. Between 1914 and 1917 political actors from across the spectrum espoused an enlarged role for the state in organising the wartime economic, political, social and cultural life of the country. In 1917, a policy of state control of grain transactions was set out by the Kadets and Mensheviks in the Provisional Government. Activities of people outside of the Bolshevik leadership also drove events. Nationalisation was carried out at times in response to demands by local activists, workers, and even managers that state organs take over the running of factories threatened with closure due to supply shortages or lack of effective organisation.

It is hard to measure precisely the impact of war communism due to a lack of reliable data. Just because something happened under war communism, moreover, does not necessarily mean it happened because of war communism. Policies were enacted patchily across Bolshevik-controlled territory. What can be said is that by 1921 the Bolsheviks had achieved military victory in the Civil War and driven the capitalist bourgeoisie to the margins of society. There had been a catastrophic fall in industrial production, however. The railways were breaking down and crop sowings had dropped. The hungry towns were emptied of much of their population and agricultural regions were on the brink of starvation. The illegal market was supplying an estimated 65 to 70 percent of the food necessary for survival. The party was split over issues such as internal party democracy and the role of the trade unions in the Soviet state. Workers protested against economic decline, punitive labour laws and the loss of functions of trade unions and factory committees. In the Tambov region peasants were in open revolt. These uprisings culminated in a rebellion by sailors at the Kronstadt naval base in March 1921. This was the backdrop to the adoption of Lenin’s New Economic Policy, which proclaimed a partial retreat from the policies of war communism and combined political hardening with economic relaxation.

The long-term legacies of war communism are open to debate. Particularly contentious has been the extent to which this period paved the way for Stalinist totalitarianism. Some features that marked the Soviet system throughout its existence though can be seen solidifying under war communism. These include a one-party state, buttressed by a radical version of Marxism and a political police with extensive powers, extreme economic centralisation, the abolition of most private ownership, replacement of debate with agitation and transmission of ideas, and bureaucratic mobilisation of the population in the interests of the state. 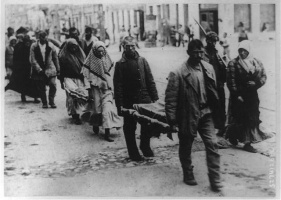