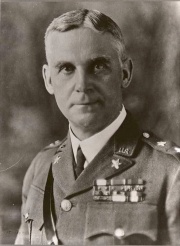 U.S. Army Chief of Staff General Charles P. Summerall enjoyed a distinguished military career that spanned nearly forty years. During World War I he commanded several American units and established a reputation of innovative, aggressive, and effective leadership. After retiring in 1931, he served as the president of The Citadel in Charleston, SC.

Born in Blounts Ferry, Florida on 4 March 1867, Charles Pelot Summerall (1867-1955) gained an avenue out of poverty when he graduated from the United States Military Academy in 1892. He joined the Infantry as a second lieutenant, though he soon transferred to the Artillery. By the end of the 19th century, Summerall had served with the 1st Infantry and the 5th Artillery in both California and at Fort Hamilton, New York; he had worked as an engineer officer and as an aide to the commander of the Department of the Gulf; and he had served in the Philippine Insurrection.

Summerall participated in the China Relief Expedition toward the end of the Boxer Rebellion, just prior to earning a promotion to captain and a new assignment to the 106th Coast Artillery Company in July 1901. He bounced from station to station until landing in a more lengthy position as senior artillery tactics instructor at West Point from 1905 to 1911. Promoted to major in 1911, he commanded artillery units in San Antonio, Texas, and at other Army and National Guard camps until 1914. Summerall climbed the ranks from lieutenant colonel in 1916 to brigadier general (National Army) by August 1917.

In the World War↑

General Summerall gained extensive combat and command experience during the First World War. He commanded the 67th and 1st Field Artillery Brigades in 1917. The following year he earned a promotion to major general in the National Army as he ascended from brigade to division (1st Division) to V Corps command while providing bold and inspiring leadership in operations in Catigny, Soissons, St. Mihiel, and the Meuse-Argonne. For example, as recounted in his Distinguished Service Cross citation, while commanding the 1st Division, Summerall visited the front lines of his division and personally reconnoitered the position despite taking heavy enemy fire. He encouraged his men to attack the town of Berzy-le-Sec, near Soissons, promising them strong artillery backing and encouraging them by his example. As a result of Summerall’s “great courage and utter disregard for his own safety, the men of his division were inspired to enormous and heroic efforts, capturing Berzy-le-Sec the next morning [19 July 1918] under terrific enemy fire, and later in the day the division reached all its objectives.”[1]

The general established a reputation as a farsighted yet aggressive officer, in large part due to his philosophy about and employment of artillery. To Summerall, artillery was a means to crush the enemy’s infantry, to be used close to the front and in tandem with American infantry. In contrast to the practice of using mass artillery bombardments lasting hours, days, or even weeks to “soften” the enemy prior to infantry assaults, he favored the use of rolling barrages, or heavy, concentrated artillery as direct support for mass infantry assaults. Summerall also demanded much from his subordinate officers, and drove his units ahead, despite heavy casualties. This occasionally made him the object of scorn and criticism. Many contemporaries and historians chastised Summerall as an egotistical glory-hunter for one action in particular, the “race to Sedan.” This “eleventh-hour” operation, involving his corps’ 1st Division, needlessly cost many American lives toward the end of the war. This incident, however, was just one blemish on his otherwise venerable combat career. Among his awards during the war, he earned the Distinguished Service Cross, the Army’s second highest award for valor, for his intrepidity in Soissons, and the Distinguished Service Medal for his cumulative experience in the war.

General officer promotions followed after the Armistice. Summerall achieved the rank of major general in the Regular Army by mid-1920. His postwar commands included the 1st Division until 1921 and the Hawaiian Department until 1924. While serving in the latter position, Brigadier General William ‘Billy’ Mitchell (1879-1936) vociferously criticized Summerall for having inferior air defenses on the Hawaiian Islands. Possessing an outspoken bias against the aviator, Summerall testified as a witness against Mitchell in the latter's court martial in late 1925. After commanding the VIII and II Corps areas from 1924 to 1926, Summerall served for four years as the Chief of Staff of the United States Army, earning a promotion to general in February 1929.

Retiring in March 1931 after almost forty years of continuous service, General Summerall served as president of The Citadel in Charleston, South Carolina from 1931 to 1953. He passed away on 14 May 1955. As a former U.S. Army Chief of Staff, Summerall received a Combined Services Full Honors Funeral, organized and supervised by Major General John H. Stokes, Jr. (1895-1968), Commanding General of the Washington Military District.