By declaring belligerency (Zustand drohender Kriegsgefahr) in the German Empire on 31 July 1914, executive authority in the Army Corps districts was devolved to the Commanding Generals of the active Army Corps. Thus civil administration was made subordinate to the military authorities. When the army left for the field, Stellvertretende Generalkommandos (Deputy General Commands) assumed command. They were considered the backbone of military organisation and were thus provided with comprehensive authority. Deputy Commanding Generals (stellvertretende kommandierende Generäle) had immediate access to the Kaiser as supreme warlord.

The military was allowed to suspend certain rights, including the right to personal freedom, freedom of expression, freedom of meeting and freedom of the press. This so-called tightened belligerency (verschärfter Kriegszustand) was applied in fifteen of the twenty-five Army Corps districts. These measures had to be published and justified. They aimed at ensuring a smooth mobilisation process and internal security. Before the war, conservative military personnel was apprehensive of Social Democrats hampering mobilisation. In 1914 no such thing happened because the German government relinquished confrontational measures to avoid endangering war consensus (Burgfrieden).

The design of these methods came from the era of short wars in the 19th century. Indeed, the Deputy General Command system was a product of Prussian martial law from 1851 (Gesetz über den Belagerungszustand). The three Bavarian Deputy General Commands were also given broad capacities; although the Bavarian belligerency law from 1912 did not allow military commanders to restrict personal freedom, it did tighten penal law. From the beginning of the war in 1914, military authorities across all of Germany were responsible for issues of civil administration for nearly five years. Different interests, lack of expertise and insufficient coordination between military and civil authorities led to severe problems during the war.

Deputy General Commands were particularly in charge of public security (paragraph 9 of Prussian law; paragraph 4 of Bavarian law). This was rather vague and opened the door for military control spanning almost all areas of public life. Indeed the realisation differed in Germany’s Army Corps districts dependent on the measures the Deputy Commanding Generals considered necessary.

The Deputy General Commands were in charge of censorship and propaganda. During the transition to war economy they intervened in the distribution of workers and resources and decided on labour conditions and wages. After the implementation of decisive measures to strengthen the German war economy (Hindenburgprogramm and Vaterländischer Hilfsdienst, both in 1916), the Commands were more under indirect control of the German Supreme Army Command (Oberste Heeresleitung). Even food supply and food prices fell within the scope of the military authority. Hence the military was involved in questions of social policy.

Army Corps districts procured supplies for their active Army Corps in the field. Deputy General Commands provided arms, ammunition, military equipment and horses. In particular, they were in charge of replacements. During the war the Prussian Deputy General Commands sent an average of 170,000 soldiers per month into the field. These included convalescents and recruits who had absolved the first part of their training under the supervision of the Deputy General Commands in German garrisons. Later on, the Commands oversaw the prisoners of war and military hospitals, cared for disabled ex-servicemen and protected lines of communication and other strategic infrastructure.

It proved to be a problem that, with the exception of Bavaria, the Deputy Commanding Generals were immediately subordinated only to Wilhelm II, German Emperor (1859-1941), who lacked initiative and sufficient administration to supervise the measures of each of Germany’s Deputy General Commands. Beginning in 1916, the Prussian War Office was anxious to guarantee at least a certain degree of homogeneity in the administration by issuing guidelines and offering recommendations. The Bavarian War Office had the authority to coordinate the measures of the civil and military administration.

The establishment of the Oberzensurstelle in 1915 and the Kriegspresseamt and the Kriegsamt in 1916 was intended to bring standardisation to German politics. Indeed, this resulted in a certain degree of homogeneity of censorship, propaganda and war economy. 1916 saw the establishment of a new position, Supreme Military Commander (Obermilitärbefehlshaber). This position was intended to serve as a supervisor of all the Deputy General Commands, but the position lacked the authority to intervene directly in their decisions. It was only in October 1918 that the Supreme Military Commander was allocated sufficient responsibilities. The complex administrative structures, the obscure diversity of legal relationships, and mistakes substantially contributed to the fact that since 1916 the Reich’s domestic crisis worsened and Wilhelmine administration lost its authority. 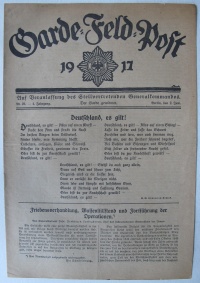 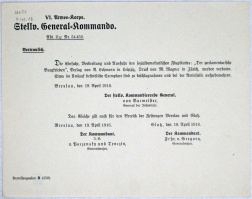 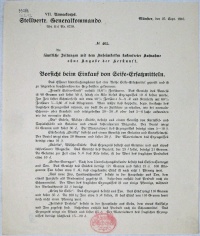