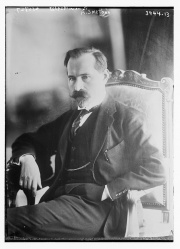 During the First World War, political writer and editor of Lithuanian magazines, Antanas Smetona in 1917 became chairman of the Council of Lithuania, which declared Lithuania as an independent state in 1918. He was twice President of Lithuania, 1919-1920 and 1926-1940

Roots of the politician’s career↑

Antanas Smetona (1874-1944) was born into a Lithuanian peasant family and was the second youngest of seven children. In 1902 he graduated from the Law School of the University of St. Petersburg. After his studies he returned to Lithuania’s historical capital Vilnius and became involved in Lithuanian national cultural and political activities. From 1902 to 1907 he was a member of the Lithuanian Democratic Party. In 1905 Smetona was elected as the Party’s representative to the presidium of the first national Lithuanian Assembly, which later was renamed the Great Assembly of Vilnius. There the idea of Lithuanian autonomy within the Russian empire was officially declared. From 1904 onwards Smetona worked as a journalist. His political ideas evolved into liberal nationalism.

From 1914 Smetona worked in the Lithuanian Central Relief Committee in Vilnius. During the First World War it organized relief work on behalf of Lithuanians. When German troops approached Lithuanian territory in 1915 Smetona became chairman of the Committee. He supported a pro-German geo-political re-orientation of Lithuania. Smetona thought that Germans were the main international means with which to guarantee the restoration of an independent Lithuanian state. In 1917 Germany gave permission to call a Lithuanian national conference in Vilnius after which the Council of Lithuania (Lietuvos Taryba or Litauischer Staatsrat) was set up. Smetona served as its chairman. After negotiations with Germany in December 1917, Berlin agreed to recognize a Lithuanian state but only if it was linked to Germany by a series of agreements over the war, communication, a customs union and a common currency. Smetona agreed to this proposal, but the majority of Council members opposed it. In February 1918, because of his pro-German orientation, Smetona resigned temporally from his duties. On 16 February, the Council declared the Independent Republic of Lithuania, although publication of the Act of Independence was prohibited by the German authorities, and it had to be distributed and printed illegally. Smetona was among twenty members of Council who signed the Act. In summer and autumn of 1918 Smetona and the conservative wing of Council supported a constitutional monarchy rather than a parliamentary republic for Lithuania.

At the end of 1918, German troops started to withdraw from Lithuania. In November 1918 the first national Government was formed. It was dominated by Smetona’s Nationalists. Smetona as the member of Council of Lithuania left for Berlin to arrange the takeover of state property from Germany and to negotiate for a state loan. Meanwhile the Bolsheviks rushed into Lithuania and the absence of the chairman of Council in the country forced Lithuanian politicians to rearrange the Cabinet. Smetona was accused of running away and had to resign. Afterwards he travelled through Scandinavia to solicit support for Lithuania. Following the changes in the provisional Constitution the office of Lithuanian President was established, and Smetona, as an authoritative figure was elected the first President of the Lithuanian Republic in April 1919.

Critic of Lithuanian parliamentary democracy in 1920-1926↑

In June 1920 the Lithuanian Constituent Assembly, the first democratically elected institution started work. Smetona relinquished his presidential duties to the chairman of Assembly and returned to political journalism. As the leader of the Lithuanian Nationalist Union, a nationalistic and conservative political force, he became a vocal critic of Lithuanian parliamentary democracy. His ideal state form was a strong presidential state. Despite the fact that the Nationalist Union joined together famous personalities in the Lithuanian national movement, his party, because of its conservative attitude towards social reforms failed to elect any representatives to the various Diets. However as a distinguished statesman he was called upon in 1920 to lead the Lithuanian delegation in Lithuanian–Latvian border negotiations. In 1923 he was appointed as Lithuania’s Governmental Representative to the annexed Klaipėda (Memel) region. In the 1920s despite this political activity and political journalism Smetona also engaged in pedagogical and intellectual pursuits. He was a lecturer at the University of Lithuania in Kaunas of ancient philosophy and ethics, and also translated a number of ancient Greek works into Lithuanian.

President of Lithuania and authoritarianism in 1926-1940↑

In December 1926 a group of young nationalistically emancipated officers overthrew the leftist Lithuanian government and offered Smetona presidential powers. In the aftermath of the coup he gradually implemented an authoritarian regime. In April 1927 Smetona dissolved the parliament and in 1929 he removed the politically ambitious Augustinas Voldemaras (1883-1942) from the post of Prime Minister. In 1928 and 1938 new Constitutions with extensive presidential powers were promulgated. In 1931 and 1938 he was unanimously elected to the presidency. After the coup, Smetona’s regime suppressed political opposition and closed down other political parties except the Nationalist Union. His regime was based on the support of the army, security police, Nationalist Union, state officials and farmers.

Despite his non-democratic rule, Smetona criticized Fascism, Nazism and radical nationalism. Smetona’s authoritarianism was quite moderate. He visualized himself as a “Leader of the Nation” (“Tautos vadas”) whose role was to unify Lithuania under his authority.

When the Soviets invaded Lithuania in June 1940 Smetona was one of the few Lithuanian politicians who advocated resistance against the Red Army. But he did not get support from the Lithuanian Army commanders. In 15 June Smetona left for Germany, Switzerland, and Latin America before finally settling in Cleveland, USA. Smetona died in a fire at his son’s house in Cleveland in January 1944.