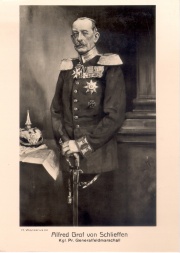 Count Alfred Schlieffen was chief of the Great General Staff of the Prussian-German Army between 1891 and 1905. He devised the so-called Schlieffen Plan, a strategic plan for a campaign against France. Schlieffen bequeathed this plan to his successor Helmuth Johannes Ludwig von Moltke, who executed it with modifications during the German offensive of 1914.

Coming from an old Pomeranian noble lineage, Alfred Graf von Schlieffen (1833-1913) was educated in the spirit of the Pietists. After passing the Abitur (German high school exam) in 1853 and a short stint as a law student, he opted for an occupational career as an officer in the Prussian army.

Schlieffen attended the General War School from 1858 to 1861. He then served as a General Staff officer from 1863 onwards in alternating capacities, such as in the Topographic Department of the General Staff. From 1866 to 1868, he served under the Prussian military attaché in Paris. Schlieffen gained personal experience with war during the wars of German unification, where he took part in the battle of Königgrätz in 1866 and the winter campaign at the Loire in 1870–71, amongst others. Subsequent to his position as commander of the first regiment of the Garde-Ulanen (1876–1884), Schlieffen became department head in the Great General Staff and was promoted to the position of quartermaster general in 1889. He was regarded as withdrawn, taciturn, and rather cold, but at the same time very dutiful, determined, and knowledgeable.

Schlieffen reached the peak of his career when Count Alfred von Waldersee (1832–1904) had to retire from his position as chief of the General Staff in 1891. As chief of the General Staff, Schlieffen came to determine the Prussian-German Army’s operational strategy between 1891 and 1905. At that time, he was committed to strengthening the military’s technical weaponry, amongst other goals. Even after his leave, he went on publishing regularly as a military writer. In 1911 he was honoured with the rank of general field marshal by Wilhelm II, German Emperor (1859–1941). He passed away at age seventy-nine in January 1913.

Today Schlieffen’s name is most closely linked to what is known as the Schlieffen Plan. Schlieffen had taken into account both the danger of being outnumbered by his opponents and a two-front war, which had gradually become more and more likely since the 1890s. At the same time he had to cope with the technologies and conditions imposed by industrialised war and huge armies with millions of soldiers. Based on multitudinous travels with the General Staff as well as war games, Schlieffen devised a number of strategic models which, among other things, envisaged a deployment in the east or on two fronts. The most important component of the war, however, always remained the idea of an offensive to the west; since 1892, he had been favouring this model and continued developing it further. During the winter of 1905–1906, Schlieffen wrote a memorandum embodying these concepts and addressed it to his successor Helmuth Johannes Ludwig von Moltke (1848–1916). Schlieffen projected a powerful invasion into France, crossing the neutral states Luxembourg, Belgium, and the Netherlands in order to quickly encircle the enemy and destroy them through battle. For this purpose he proposed the deployment of about two-thirds of the German troops on the right wing. After a quick defeat of the French, the German Army would then turn to the Russians. However, he calculated with divisions that did not yet exist.

These plans show that Schlieffen preferred strictly military considerations to politics or the law of nations, a preference that political leadership accepted regarding the Schlieffen Plan. Schlieffen also did not hesitate to consider the option of a pre-emptive war. On the other hand, he scarcely contradicted the restrictive armament planning of the chancellor and war minister, even though his own plans would have required an increase in troops.

In 1914 Moltke implemented a modified and less risky version of the Schlieffen Plan and failed with it. According to those who blame Moltke for this failure, he had diluted the formula for victory.

After World War I, the high estimation in which Schlieffen had been held even during his lifetime turned into a sort of cult that was promoted further by his followers, such as Wilhelm Groener (1867–1939), Hermann von Kuhl (1856–1958), and Wolfgang Foerster (1875–1963). The union of former General Staff officers named themselves after him and commemorated an annual so-called Schlieffen Day. The Schlieffen Plan only seldom met with criticism, which in turn could not hope to pass the historiography of the Reichsarchiv, an institution that claimed to dispose of the prerogative of interpretation. Also, for the General Staff officers in service of the Reichswehr (Reich Defence) and Wehrmacht (Defence Force), Schlieffen’s doctrines of encirclement and annihilation continued to prevail.

However, even while apologetic publications regarding the man and his ideas continued to be released in the 1950s, Gerhard Ritter’s (1888–1967) 1956 study brought about an increasingly critical revision of how the Schlieffen Plan was perceived in scholarship and by the public. Since then the Schlieffen Plan has no longer been seen as a brilliant formula for victory, but rather as a fatal failure of statesmanship for having gone through with it, and in doing so, being controlled by the men of the sword. 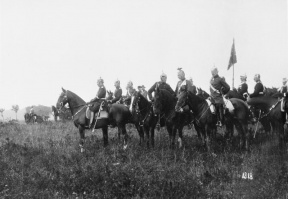