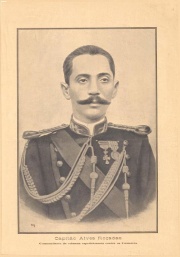 General José Augusto Alves Roçadas (1865-1926) was born on 6 April 1865 in Vila Real de Trás-os-Montes and died on 28 April 1926 in Lisbon.[1] He was the son of José Manuel Roçadas and Ana de Jesus Ferreira.[2] He completed preparatory studies for the artillery and entered the army school, where he ranked first in the course on the general staff. On 24 January 1891, he was promoted to lieutenant. In March 1892, he became part of the general staff corps and, on 24 February 1894, he was promoted to captain and joined the campaigns of pacification.

In December 1897, Alves Roçadas first travelled to Angola, where he took on the post of chief of staff for the general government during the campaign of pacification. In 1901, he returned to Lisbon and in January 1902 was transferred to India to serve in the same position. On 1 April 1905, after being appointed governor of the district of Huila, Angola, he returned to the metropolis and stayed a few days before embarking for Luanda, where he would arrive on 15 July. Alves Roçadas directed his attention to the indigenous populations that were in a state of general revolt against Portuguese sovereignty.[3] He fleshed out an offensive plan and organized a military column. On 23 September 1905, he began the march to Humbe. On 22 November, the column headed for the Gambos. It arrived at Chibia on 7 December, where the operations were completed.[4] On 29 August 1906, he concentrated his forces in Humbe, crossed the Cunene River, and built “Forte Roçadas”.

On 26 August 1907, he began the operations with a force of 2,300 men and, after occupying several places without resistance, entered into combat at Mufilo. On the march to the south, there were a series of ferocious battles, culminating in the capture of the Cuamato territory on 4 October.[5] Captain Alves Roçadas returned to Portugal and, was promoted to major, on 2 April 1908, and to lieutenant colonel, on 18 May. On 11 July, he went to Macau as the governor. He remained in the east for only a year, because he was appointed governor-general of Angola. He took office on 17 December 1909. With the republican revolution in 1910, he ended his term in office, returned to Lisbon, and was placed in the army staff where he remained between 1911 and 1914.

At the beginning of the war, all the border areas of the African colonies became unstable, which led the Portuguese government to reinforce the military garrison of Angola. On 18 August 1914, Lieutenant Colonel Alves Roçadas took command of the expeditionary force, which had the mission of reinforcing the geographical zone of Huila.[6] On 10 September, he embarked from the port of Lisbon. Several weeks later, he landed in Moçâmedes. On 17 October, the German governor of one of the frontier territories in Damarland entered Portuguese territory with a small force. The Portuguese force established contact and after an exchange of words and mutual threats, the governor and German officers were killed.[7] On 31 October, German troops entered Cuangar (Cuamato-Cubango) and killed two officials, one sergeant, and five soldiers.[8] The military situation worsened considerably and Alves Roçadas was forced to change his operations plan, giving priority to the defence of the military posts located at the frontier. Alves Roçadas was aware that a German military force had entered Portuguese territory and was moving in the direction of Naulila. On 17 December, the Germans settled on the left bank of the Cunene River. On 18 December by 4:30am, the German forces, which were larger in number, had attacked the Portuguese troops, forcing them to withdraw to the post of Donguena. In May 1915, Alves Roçadas returned to Lisbon and assumed functions in the general staff. On 13 November, he was promoted to colonel.

In September 1918, Alves Roçadas was appointed commander of the 2nd division and departed to France. On 16 April 1919, he assumed command of the Portuguese Expeditionary Corps and led its return to Portugal. In September 1919, he embarked for Mozambique where he held the position of general secretary and governor until April 1923. On 31 December 1924, he was became a general and was appointed commander of the 1st division. General Alves Roçadas, after returning from Mozambique, became part of the group of General Sinel de Cordes (1867-1930), who prepared the conspiracy that led to the military coup on 28 May 1926. General Alves Roçadas was appointed to take power, which never came to be, as he feel ill shortly beforehand.

From his literary work, we highlight: Report of War Operations in the District of Huila in 1905 and his Report on Operations in Southern Angola in 1914. He was awarded the Distinguished Service Gold Medal for the Cuamato campaign of 1907 and the Queen D. Amélia Gold Medal in commemoration of the Mulondo campaign in 1907. He was appointed to the Military Order of the Tower and Sword of Valor, Loyalty, and Merit (1908). 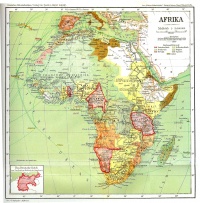 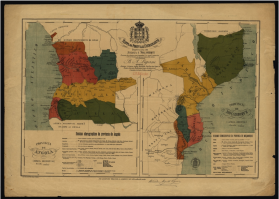 The overseas provinces of Portugal, map