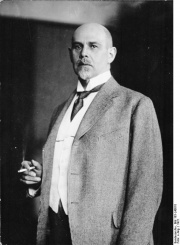 Walther Rathenau was one of the most influential entrepreneurs before the First World War. In 1914/1915 he became one of the main organizers of Germany’s war economy. After World War I he supported the “policy of fulfilment”. As German Minister of Foreign Affairs he signed the Treaty of Rapallo with Soviet Russia in 1922.

Walther Rathenau (1867-1922) was born into the grand-bourgeoisie in Berlin as the first child of Mathilde Rathenau (1845-1926) and Emil Rathenau (1838-1915). The Jewish family followed the idea of acculturation to Christianity. Rathenau developed a complex self-discourse as a Jew that included internalization of antisemitism to avoid further discrimination. This can be traced in his more than 150 publications on economic, political, philosophical, and cultural matters as in his edited letters.

Following his father as an entrepreneur in the electronics company Allgemeine Elektrizitätsgesellschaft (AEG), he became one of the most influential industrialists and bankers in Wilhelmine Germany. Although not engaged in party politics, he attempted to gain political influence, to limited success.

In mid-August 1914, he voluntarily began to organize the War Raw Material Department in the Prussian Ministry of War. Together with Wichard von Moellendorff (1881-1937) and others, he organized the complete control of raw materials (except food) in Germany to satisfy the demands of a war economy. In the spring of 1915 he left this post. This experience with “Gemeinwirtschaft”, a mix of free market and state economy, influenced his philosophy.

Rathenau’s attitude towards the Great War developed from a mix of patriotism and a sceptical endorsement of the idea of catharsis to desperation. In public, however, he supported the German war effort until the very end. After the war, he was involved in reparation politics. As Minister of Foreign Affairs under Chancellor Joseph Wirth (1879-1956) from the end of January 1922, he became a leading proponent of the “policy of fulfilment”. The signing of the Treaty of Rapallo with Soviet Russia and Rathenau’s role therein remains highly controversial. Rathenau was assassinated near his home in Berlin-Grunewald by right-wing terrorists in 1922. 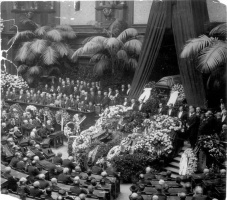