Though of minimal significance for Japan militarily, the Great War helped stimulate the formation of a modern industrial economy in urban centers across the archipelago. The war boom of 1915-1918 ushered in a period of explosive urban growth, with a particular impact on economy and society in Japan’s provincial capitals.

The First World War boom expanded factory production from its late 19th century base in Tokyo and Osaka to provincial cities. In Kanazawa, the value of manufacturing leapt from eighteen million to fifty million yen between 1916 and 1920. In Niigata, heavy industrial production rose by a factor of eleven between 1912 and 1921. Fifty new companies were established in the city of Okayama between 1916 and 1920, and ninety-nine in Sapporo between 1912 and 1920. The nature of factory production changed as well, as enterprises employed larger numbers of workers and shifted to steam- and gas-powered mechanization. While some of this was new production for export, goods for domestic consumption were also affected, as the 1910s saw a shift from household manufacturing and the putting-out system to factory-based production of goods such as furniture, lacquer ware, tatami mats, umbrellas, and shoes.

Freight carried via an expanded national rail system rose sharply, integrating provincial cities into national and international markets. The growth of trade stamped regional cities with the character of their productive base. Kanazawa became known as a city of crafts, producing silk cloth, gold leaf, and lacquer ware. With its oil refineries, Niigata was seen as a center for heavy industry. Okayama was a textile producer, and the beer that took the Sapporo trademark became the symbol of the city’s ties to agriculture and the importance of its food-processing industries.

The rapid expansion of factory-based manufacturing, the rapid influx of population, and the rapid increase in the circulation of goods and people all placed pressing new demands on urban infrastructure, setting off a construction frenzy that transformed the built environment of the provincial city along with its economic base. To meet the demands of a surging population and burgeoning local industry, provincial cities rushed to build roads and light rail, to expand ports and electrical infrastructure. In Kanazawa, a streetcar line opened to great fanfare in 1919, after the heart of the old mercantile downtown was razed to make room for the new tracks. A vibrant commercial and entertainment strip sprang up on the foundation of the old neighborhoods along the tracks, creating what would become the heart of “modern Kanazawa.” In Okayama, where a river ran through the heart of the city, municipal government began to reconstruct the main Kyōbashi Bridge in 1915, replacing the old wooden structure with the latest engineering technology – hailed in the opening ceremony of 1917 as “the first reinforced concrete bridge in the prefecture.”[1]

Electrical power, introduced in the late 1880s, spread quickly during the war boom and provided power to streetlights, upper class homes and factories. In Sapporo there were 255 streetlights in 1911; by 1920 the number had risen to 7,835. Over the same period households supplied with electricity increased from 2,695 to 21,075, and factory consumption leapt from 4,000 to over 4,000,000 kilowatt hours. In the 1870s and 1880s, the gaslight and the spindle had served as symbols of civilization and enlightenment. During the First World War they were replaced by neon signs and electrical appliances that signified modern urban life. As new electrical and telephone services became available, as cities created systems of mass transportation, widened and paved their roads, improved sewer systems and expanded the supply of running water, the built environment of the city seemed to become a perpetual motion machine, the streetscape a site of ceaseless change.

The economic volatility and dramatic physical changes of the war years were mirrored in the domain of urban society. More than anything else, the figure of the narikin or “nouveau riche”, came to symbolize the social effects of the war boom. As the growth of trade expanded opportunities for quick profits and entrepreneurship, the number of parvenu capitalists multiplied, dominating the ranks of businessmen in all fields of activity. Every locality had a rags-to-riches story like that of Yamamoto Tadasaburō (1873-1927) of Okayama. A local shipping magnate who made his fortune during the war, Yamamoto became a celebrity both for his eccentric and flamboyant habits and for his public munificence. His exploits – like a tiger hunt in Korea with a retinue of 200 men and a sensational geisha competition – as well as his philanthropy – funding a newspaper, an agricultural school, and the city’s first public library – made him a local legend and a symbol of the social possibilities of the modern city of the World War I years. Yet Yamamotō’s story held other lessons as well. He lost his entire fortune in the catastrophic postwar depression that set in after 1920, when European traders returned to reclaim their markets and demand for Japanese shipping dried up. The cascade of bankruptcies among the narikin demonstrated that, while growth in the modern economy generated unprecedented prosperity, it also brought unprecedented insecurity, a lesson reinforced by the swelling ranks of the unemployed that became a symbol of the postwar bust.

Even more than the oversized figure of the narikin, the rise of worker radicalism and urban protest in the late 1910s signaled the dangers inherent in the new urban economy. The war marked the onset of a new level of urban violence, as the eruption of popular rage in the rice riots of the summer of 1918 underscored the instability of urban society. Volatile prices, hoarding, and shortages of rice touched off rioting in cities, towns and villages throughout the country – rage directed at rice merchants, wealthy landlords, and political authorities. Local newspapers were a key factor in the outbreak and spread of violence. Coverage in the press of daily rises in rice prices helped inflame public anger, and sensational reports of riots in one locale inspired crowds elsewhere to action. The press also shaped public perceptions of the broader significance of the rice riots after the army was dispatched to 144 locations to suppress the uprisings. In the aftermath of the riots, reports on police investigations highlighted the prominence of poor laborers and the former outcasts known as burakumin among the protesters. They told an alarming story of class warfare tearing apart the fabric of urban society. Tales of new forms of urban wealth and poverty that circulated during the war boom suggested that if the narikin were the beneficiaries of economic growth, these were its victims. Occupying the extremities of the new social unevenness produced by urban capitalism, the violent gestures of the crowd, no less than the conspicuous consumption of the nouveau riche, dramatized the new social face of the city. 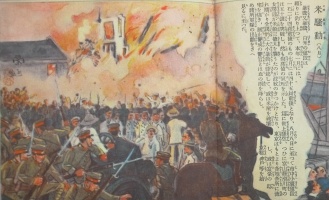