This article focuses on the efforts of the Italian government and certain institutions to care for the high numbers of war orphans in the country. In addition to a brief reconstruction of the legislative process which led to this law, it attempts to outline the purposes and objectives of the law, as well as to highlight the institutions that supported these measures throughout Italy.

In parliament a few months after Italy had joined the war, the Honorable Camillo Peano (1863-1930) brought up the issue of the social care of orphans. At that point, Italy had no clear legislation on the issue, nor any governmental institutions devoted to it. With the exception of the National Institute Emanuele Filiberto di Savoia (Opera Nazionale Emanuele Filiberto di Savoia), created to support the orphans of the soldiers who had fallen in Libya, this kind of care was usually provided by charities or by private committees which received welfare payments. As a result of the war and the massive mobilization of soldiers, especially among the lower social classes, this care had to be extended from a few thousand orphans to the masses. The social classes most affected by the loss of the head of the family were the peasantry and low-income families. At the end of the war, of about 345,000 orphans, almost 218,000, or 63 percent, were the children of peasants.[1]

Peano’s interventions led the Prime Minister Antonio Salandra (1853-1931) to draw up a draft law, which was presented to the Chamber of Deputies on 6 June 1916. After Salandra was dismissed on 12 June 1917, the draft law continued being developed by Paolo Boselli’s (1838-1932) administration, being passed in the Chamber of the Deputies on 15 December.[2] When it was presented to the Senate, it was considered by a special commission, which requested many alterations. The law was sent back to the Chamber of Deputies on 6 July 1917 for approval by ballot vote.[3]

Children who could be considered orphans were divided into three categories: legitimate children; “natural” ones formally recognized (and in some cases, even those who had not been recognized) whose father, mother, or guardian had died due to the war; children whose parents were invalids or unemployable due to the war; and children who, as a result of the war, had no immediate relatives left who could take care of them.

Institutional care for orphans was organized in a pyramid-like framework: at the top was the Ministry of the Interior, followed by the National Committee and the Provincial Committees, assisted by charities and Supervisory Commissions. Provincial Committees seem to have done the majority of the organizational work, with an office in each prefecture of the Kingdom. The Provincial Committees maintained political contacts between the centre and the peripheries, but also with the families of the orphans. Their duties included buying goods, receiving donations, and addressing and coordinating the work of the public corporations, associations, committees, and institutions dedicated to caring for orphans; moreover, the Provincial Committees reported everything to do with the care of orphans to the National Committees and to the Ministry of the Interior twice a year. Orphaned children living in the colonies and abroad, while officially the responsibility of the Provincial Committees, were in fact supported by the General Secretaries of the colonies and by the Royal Consuls.[4] Even though the state, by means of the new legislation, assumed the moral obligation to ensure pensions and payments, care for orphans was delegated to some private national institutions (some of which predated the law, while others were established in order to help carry it out). The state maintained the prerogative to approve the institutions, to coordinate them, and to supervise their activities. These institutions were legally obligated to support the work of the state by providing the orphans with an education and career training, for example through art and trade schools or farming collectives, in an attempt to guarantee them a certain social and economic stability when they grew up.

The main private institutions created during the war were: the National Institute (Opera nazionale) for the orphaned children of farmers who had died or been made permanently unemployable; the Organization of the Seafarers (Istituto per la gente di mare); the National Institute for the civil and religious care of war orphans (Opera nazionale per l assistenza civile e religiosa agli orfani di guerra); the General Union of Teachers (Unione generale degli insegnanti); the National Organization for the care of orphans of immigrants who died in the war (Ente nazionale per l’assistenza degli orfani degli emigranti morti in guerra), created under the auspices of the Italian Colonial Organization (Istituto coloniale italiano); the Italo-American Foundation in favour of the orphans of Italian officers who died in war (Fondazione italo-americana per gli orfani degli ufficiali italiani caduti sul campo); the National Institute in favour of the educational support of war orphans (Opera nazionale per l’assistenza scolastica degli orfani di Guerra) and the National Industrial Foundation in favour of the war orphans (Fondazione nazionale industriale pro orfani di guerra).

In 1929, all active institutions were merged into a single organization called the National Institute in favour of the war orphans (Opera nazionale per gli orfani di guerra).[5]

Contained within the policy of social care for war orphans was an attempt to offer a concrete answer to those families who had lost a parent during the war. This policy also displayed the political will by the state and some institutions to make the war — with its traumas, its sacrifices, and possible victories and benefits — not only the heritage of the armed forces, but also of the entire state. This was useful for mobilizing the home front, on which the state was economically dependent, and for keeping nationalistic and patriotic feelings alive in a sense of collaboration and general mobilization in favour of the war effort. In the government’s opinion, the care and protection of war orphans had to be considered not only as the responsibility of the state (which owed a debt to families who had lost their source of support to the war), but also of the entire national community. Each Italian citizen had to feel indebted to those “who had sacrificed their life in order to defend their country and the freedom of the people.”[6]

In fact, since the war was seen as a defense of Italy, and had an impact on society as a whole, the effects of war, in this case orphaned children, were to be solved nationally. From this point of view, the care of war orphans became one of the “codes of national solidarity” (Codice della solidarietà nazionale),” written during the war and celebrated many times in the following years. 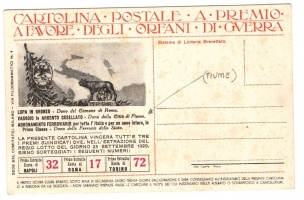 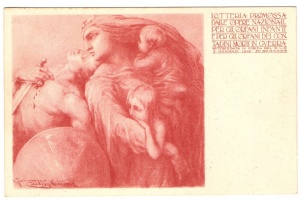