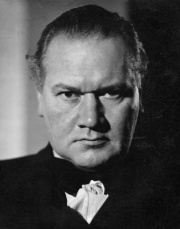 C. R. W. Nevinson was a British painter who served as an official war artist in World War I. His paintings depicted soldiers suffering and dying on the battlefield. His work was well-received, although some found it too grim and controversial for display during wartime.

C. R. W. Nevinson (1889-1946) studied in London and Paris before World War I broke out. He identified with the futurist movement, which focused on technology, industrialization, violence, and death. At the outset of the war, he was eager to seek inspiration for his art. As a pacifist, however, he chose to serve as an ambulance driver with the Red Cross and Royal Army Medical Corps until 1916 when he had to discontinue his work due to rheumatic fever.

Nevinson found the horrors of war disillusioning, and he used his experiences as inspiration for his paintings. He visited the front lines and spent time among the wounded to witness the suffering. His painting La Mitrailleuse (1915) shows three soldiers operating a machine gun while a comrade lies dead between them; the image has been identified as a particularly strong representation of trench warfare and a departure from the traditional etiquette of war. Returning to the Trenches (1914-1915) shows countless dehumanized soldiers marching in lockstep. Nevinson held an exhibition of his work in 1916 at Leicester Studios, and the popular and critical reception was very positive.

As the war progressed, Nevinson was named an official war artist by the War Propaganda Bureau. He abandoned some modernist techniques, focusing more on realism to convey a true sense of wartime suffering Paths of Glory (1917) shows two dead soldiers lying face down in mud near a barbed wire barricade. The painting was censored as the War Office disapproved of displaying dead bodies. Nevinson insisted on showing it in an exhibition, so he covered the bodies with brown paper and wrote “Censored” across the paper. He was also commissioned by the British War Memorials Committee to create a painting for their Hall of Remembrance in 1918. He painted The Harvest of Battle (1919), a 183 x 318 centimeter depiction of a battlefield covered in mud and shell holes. Soldiers lie dead on the ground while wounded survivors are carried by their fellow soldiers. The Hall of Remembrance was never created, but the painting is displayed at the Imperial War Museum.

Nevinson continued to paint after the war, focusing more on landscapes and cityscapes. In 1937, he released an autobiography, which has been criticized for alleged inaccuracies. There was less government demand for his painting services in World War II, but he continued to paint war images until suffering a stroke in 1942. He taught himself to paint with his left hand, but his career dwindled in his last few years. He died of heart disease in 1946. 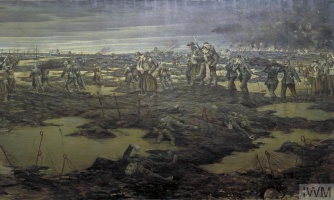 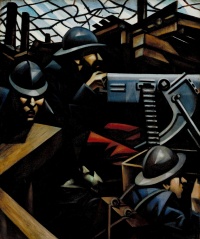 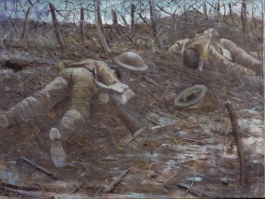 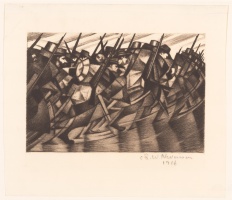