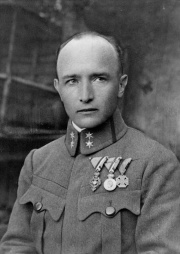 The Austrian writer Robert Musil served as a soldier throughout the entire period of the war, first for border security in South Tyrol/Trentino, later on the Italian Front (“Mountain war”), and finally as a propaganda editor. His literary work after 1918, especially his novel The Man without Qualities, examined both the conditions that led to the outbreak of the war, as well as its proximity to ecstatic, quasi-religious states.

Robert Musil (1880-1942) descended from an Austrian family of civil servants, scholars, engineers and officers whose traditions he initially upheld. Between 1894 and 1897, he attended the cadet schools in Eisenstadt and Mährisch-Weißkirchen in preparation for a career as an officer. The seventeen-year-old subsequently enrolled at the Technical Military Academy in Vienna but soon dropped out in favour of an education in engineering (from 1898, Engineering studies in Brunn; 1901/02, one-year voluntary service; 1902, unpaid assistant clerk in Stuttgart). Owing to his growing philosophical and literary interests, Musil took up studies in philosophy and psychology in Berlin in 1903 which he completed in 1908 earning a doctorate for his dissertation on the physicist Ernst Mach (1838-1916). Encouraged by the success of his debut novel, Die Verwirrungen des Zöglings Törleß (The Confusions of Young Törless, 1906), he opted to become a freelance author instead of pursuing an academic career. His novella collection, Vereinigungen (Unions), was published in 1911. Prior to the outbreak of war, Musil was employed first as a librarian at the Vienna University of Technology, and then in Berlin as a literary editor at the S. Fischer Verlag’s culture journal, Neue Rundschau. It was in this journal, in September 1914, that he published the vindicatory essay on the war, Europäertum, Krieg, Deutschtum (Europeanism, War, Germanness).

The years of the First World War↑

On 20 August 1914, Musil reported for duty as a reserve officer of the k.u.k. Landsturm in Linz and was sent to South Tyrol as commander of the Landsturm March Battalion 1/24 for border security. On 1 November, he was promoted to Landsturm-First Lieutenant. On 25 January 1915, he was replaced as unit commandant Sulden-Trafoi due to alleged shortcomings in the military administration. Musil experienced Italy’s entry into the war as an adjutant of the 169thLandsturm Infantry Battalion in the mountain village of Palai (Mocheni Valley), and he fought in the Fourth Battle of the Isonzo in November and December of 1915, as well as in the attrition campaign at Arabba in the Dolomites in February and March of 1916.

Following a serious illness in 1916 (trench mouth und stomatitis, among other ailments), Musil was employed as executive propaganda editor at the Tiroler Soldaten-Zeitung (published in Bozen, 1916/17) and Heimat (Vienna, 1918) and also worked interim jobs in the awards and decorations department of the South-western Front command, in the Isonzo army under the command of General Svetozar Boroević von Bojna (1856-1920), and for a period as an art expert in Boroević’s Heeresgruppe. At the end of the war, Musil was a highly decorated Landsturm captain (Bronze Medal of Merit on the ribbon of the Military Merit Cross with swords, Knight’s Cross of the Order of Franz Joseph with War Decoration), working at the war press bureau in Vienna.

His wartime experiences, sometimes re-contextualised, later found their way into his written works. One such example was his recounting of the experience of nearly being hit by an Italian air-dropped flechette on 22 September 1915 from his novella Die Amsel (The Blackbird, 1928). Later, in his literary and essayistic reactions to the war, Musil would attribute the initial, collective enthusiasm for the war to a deficit of meaningful experience in modern society: Thus, he defends the “Summer experience in the year 1914”[1] as being a “flight from peace”[2], a “desire for a ‘metaphysical clash’” and “the soul’s revolution against orderliness”[3] – all of which, at other times, are manifestations of religious upheaval. For Musil, his impressions of the war were confirmation of his “theorem of shapelessness,” whereby man is “ethically a thing of virtual shapelessness, of unexpected plasticity, capable of anything.”[4] In his unfinished magnum opus, Der Mann ohne Eigenschaften (The Man without Qualities, 1930/32), a novel which was begun after the war and which is set in the years 1913/14, this theorem is personified by the protagonist Ulrich, who recognises in himself the potential to “become a saviour of the world or a criminal.”[5] In the novel’s intended finale, he was, having grown cynical, meant to enter the incipient war. In 1938, Musil and his wife emigrated to Switzerland, where he continued to work on The Man without Qualities until his death. 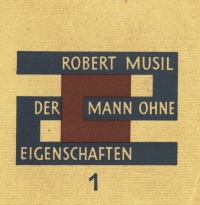 First edition cover of "The Man without Qualities"