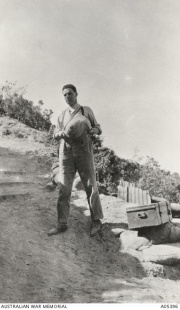 Keith Murdoch was an Australian journalist and newspaper proprietor. His Gallipoli Letter was highly critical of the Allied conduct of the Dardanelles Campaign. Later in World War I he worked as a propagandist for conscription and attempted to influence military appointments.

Sir Keith Arthur Murdoch (1885-1952) was born in West Melbourne, Australia on 12 August 1885, the son of a Presbyterian minister from Scotland. After completing his education at Camberwell Grammar in 1903, Murdoch joined the Melbourne newspaper, The Age, where he exhibited his capacity for hard work and his desire for personal advancement.

In August 1914 Murdoch was the Victorian political reporter for the Sydney Sun. He had already demonstrated that he had another useful skill; that of networking and making friendships with politicians, especially those from the Labor side of politics such as William Morris Hughes (1862-1952). In September 1914 Charles Bean (1879-1968) famously defeated him in a ballot by their journalist peers for the position of Australia’s official war correspondent. Murdoch did not enlist, but in 1915 he travelled to London to manage the United Cable Service for his Sydney Sun employers.

While on his way to the United Kingdom, he stopped in Egypt, where he was asked by the Fisher government to investigate delays in the mail service to the Australian Imperial Force (AIF). This apparently innocuous mission had wider ramifications as Murdoch secured permission from General Sir Ian Hamilton (1853-1947), the commander of the Mediterranean Expeditionary Force (MEF), to visit Gallipoli. Murdoch spent just four days on the peninsula in September 1915 and then left for the United Kingdom with a letter from Ellis Ashmead-Bartlett (1881-1931), the veteran British war correspondent, which was critical of the conduct of the thwarted Dardanelles Campaign.

Although Murdoch was arrested in transit and relieved of the original letter, he subsequently wrote his own version in which his creative imagination filled in the gaps left by his limited experience of the battlefield. He called for Hamilton to be replaced and drew a sharp distinction between the military performance of the Australians and the allegedly inferior British troops. The so-called Gallipoli Letter was read by many British politicians, including by Prime Minister Herbert Henry Asquith (1852-1928), and was printed as a cabinet document. It may have contributed to Hamilton's recall from the Middle East in October 1915. The Murdoch family and their biographical apologists have hailed the Gallipoli Letter as an instance of heroic journalism, despite his breaching censorship in wartime and the ill-informed exaggerations of the document itself.

Murdoch's role in establishing the Anzac legend has often been overlooked. Yet Murdoch, together with Fisher, now Australian High Commissioner in the United Kingdom, played a major role in celebrating the first anniversary of Anzac in London on 25 April 1916. Once again, astute networking resulted in the commemoration service at Westminster Abbey being attended by the King, the Queen and Lord Horatio Herbert Kitchener (1850-1916) amongst other pillars of the military and political establishments.

Murdoch and the Conscription Referenda↑

Between 1916 and 1917 Murdoch became intimate with the British press baron, Alfred Charles William Harmsworth, Lord Northcliffe (1865-1922). He used Northcliffe’s newspapers and contacts to further the interests of Hughes, who had succeeded Fisher as Australian Prime Minister in October 1915. Murdoch worked assiduously on Hughes’ behalf during the two conscription referenda of October 1916 and December 1917. He sought a “Yes” vote from the AIF in the United Kingdom and on the Western Front, though ultimately the two referenda failed and conscription was never introduced in Australia.

Murdoch’s final intervention in the Great War was a questionable exercise in string pulling as he, Bean, and war artist William Dyson (1880-1938) sought to prevent Lieutenant General John Monash (1865-1931) from succeeding General Sir William Birdwood (1865-1951) as Commander of the Australian Corps. Birdwood assumed the command of the British Fifth Army and recommended in May 1918 that Monash take over the Australians. Murdoch and his allies campaigned hard that this prize should instead go to Major General Brudenell White (1876-1940), despite White never having commanded a force in the field. Bean and Dyson were in part motivated by anti-Semitism (Monash was Jewish); Murdoch’s motives are unclear. The troika’s efforts were unsuccessful, and Birdwood remained firm. Keith Murdoch’s biographers have been silent on this matter. Military and media historians, however, have been scathing in their condemnation of this interference in army affairs.

Between the wars Murdoch built up his media interests in Australia to include both newspapers and commercial radio, truly becoming Australia’s “Lord Southcliffe”. In June 1940 Prime Minister Robert Menzies (1894-1978) appointed Murdoch Director-General of Information. This was an error, as Murdoch’s heavy-handed attempts at censorship alienated fellow newspaper proprietors. He resigned his post in December 1940. After John Curtin (1885-1945) became Prime Minister in October 1941, Murdoch’s attempts at influencing military policy were restricted to bombastic and critical articles that the Labor government generally ignored. 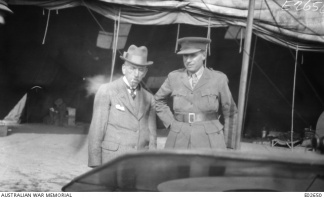