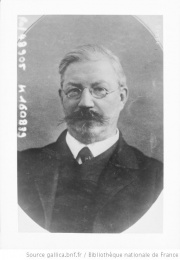 One of the founders and leaders of the Constitutional Democratic Party, Pavel Nikolaevich Miliukov took an active part in the organisation of the Progressive Bloc. He made a famous speech in the Duma on 1 November 1916 (“Stupidity or Treason?”) directed at Empress Aleksandra Fedorovna and Prime Minister Boris Shtiurmer. Miliukov participated in the February Revolution of 1917, served as minister of foreign affairs in the Provisional Government, and fought against Bolshevism before immigrating to Europe.

A hereditary noble, Pavel Nikolaevich Miliukov (1859-1943) graduated from Moscow University’s Faculty of History and Philology in 1882. In 1892 he received his Master’s in Russian history. He served as assistant professor at Moscow University from 1886, but was banned from teaching in 1895 for political disloyalty and exiled to Riazan’. He then lectured in Bulgaria (1897-98) and the United States (1903-05). During this time he was arrested and sentenced to short terms of imprisonment (1901, 1902, 1905). Along with P. B. Struve (1870-1944), he organized the radical liberal magazine “Osvobozhdenie” in Stuttgart (1902-1905). He was one of the founders of the Constitutional Democratic Party (Cadets) in October 1905, and served as chairman of its Central Committee from March 1907 to May 1918. He also served as the de facto head of the Cadet Party’s main publication, the “Rech” newspaper, from 1906 to 1917. He worked as a member of the State Duma during the third and fourth convocations and was a leader of the Cadet faction.

Views and Position in Party↑

According to Pavel D. Dolgorukov, Miliukov was “a desk-man, a theorist, devoid of any state or national sentiment whatsoever.”[1] According to A. V. Tyrkova’s (1869-1962) depiction, “his loyalty to the party programme diverted him from the current needs of the state and present day requirements.”[2] In the words of I. V. Gessen, Miliukov enjoyed unquestioned authority in the party; he had only to appear and arguments immediately ceased, “no one dared to enter into debate with him, they considered it pointless.”[3] Miliukov was not opposed to revolutionary tactics, once saying:

A method is good so long as it achieves a result, but then again it is bad if it does harm to that which it is intended to serve...Yes, we are for a revolution, so long as it serves the aims of political liberation and social reform, but we are against those who declare “permanent revolution,” because we consider that permanent revolution is revolution at any cost, which serves only the ends of reaction and bolsters the counter-revolutionary ideas of the government.[4]

In July 1914 in the State Duma, Miliukov spoke out against supporting Serbia. However, at the beginning of World War I, on 26 July 1914 at the “historic session” of the State Duma, Miliukov, on behalf of his faction, had supported the idea of a “Holy Alliance” and the temporary cessation of the struggle with the government. At the end of May and the beginning of June 1915 he came up with a new party slogan, “The Ministry of Confidence,” which became the fundamental demand of the Progressive bloc. With the resumption of the State Duma’s work on 19 July 1915, Miliukov demanded that parliamentary work be conducted on a regular basis. From August 1915, Miliukov was to all intents and purposes the only candidate for the Ministry of Foreign Affairs in the state cabinet. Miliukov emerged as one of the main founders of the Progressive Bloc and became its leader. On 27 August 1915 he took part in an unofficial meeting of its representatives with government ministers and demanded the government’s resignation, which rendered any further consultations out of the question. His main task was subsequently struggling for the Bloc’s unity and ensuring the continuance of parliamentary sessions.

In April-June 1916, Miliukov went abroad as part of a Russian parliamentary delegation. In July-September 1916, he went abroad again, the main purpose of the trip being to gather rumours concerning attempts by the Russian government to conclude a separate peace with Germany and its allies. Miliukov gathered information from European newspapers and meetings with Russian immigrants in Switzerland. This information was clearly unreliable, as rumours of a separate peace appeared frequently in the press in 1915.

On 1 November 1916, Miliukov made his “Stupidity or Treason?” speech in the Duma, hinting broadly at treasonable acts by Alexandra, Empress, consort of Nicholas II, Emperor of Russia (1872-1918) and Prime Minister Boris V. Shtiurmer (1848-1917). He told the government, “We will fight you...by all legal means, until you leave.”[5] The speech resounded across Russia and led to Shtiurmer’s dismissal. In January 1917, in reply to Mikhail L’vovich Mandelshtam’s (1866-1938) proposal to declare the State Duma a Constituent Assembly, Miliukov said, “We will do that if we have a few regiments at the Tauride Palace.”[6]

On 27 February 1917, Miliukov became a member of the State Duma’s Provisional Committee. At his insistence, when the Council of Ministers concluded their work on the evening of 27 February 1917, the Provisional Committee seized power in the capital. In 1917 he served as minister of foreign affairs in the Provisional Government. On 3 March 1917, together with A. I. Guchkov (1862-1936), he insisted that Mikhail Aleksandrovich, Grand Duke of Russia (1878-1918) take power, but he remained in the minority. He resigned, but changed his mind the next day.

Miliukov soon acknowledged that the role of the liberals in the revolution was a passive one. In March, A. V. Tyrkova told Miliukov that it was necessary to adopt the “old” classical methods of administrative enforcement, to which he replied, “It is better that I lose power, but I will not use such methods.”[7] On 18 April 1917 he sent a note to the Allied Powers proclaiming Russia’s adherence to all obligations and agreements made during the war, including the transfer of the Black Sea Straits to Russia at the conclusion of the war. The note provoked the April crisis of power and Miliukov’s resignation.

In July 1917, Miliukov supported the action taken by General Lavr G. Kornilov (1870-1918). He was elected to the Constituent Assembly but did not take part in its affairs. In January 1918 he became a member of the anti-Bolshevik Don Civic Council and wrote the Declaration of the Volunteer Army. In May 1918, he negotiated with the German command, hoping to conclude an anti-Bolshevik alliance. This was not supported by his fellow party members, and he admitted that he had made an error and resigned as chairman of the Central Committee.

In November 1918, Miliukov left for Western Europe as a member of a delegation for negotiations concerning support for the White movement. In the spring of 1920 he opposed the continuation of armed struggle with the Bolsheviks and supported union with the socialist emigration. He was editor of the Paris newspaper “Poslednie Novosti” from 1921 to 1940. He supported Stalinist industrialisation and collectivisation and Soviet foreign policy.