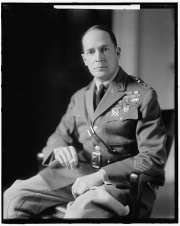 General Douglas MacArthur was a career Army officer and an American military leader during World War I. During the war, he rose to division commander and was cited for battlefield bravery. MacArthur participated in the Champagne-Marne, St. Mihiel, Meuse-Argonne offensives, and the “Race to Sedan”. He later served as the Supreme Allied commander in World War II (pacific) and the Korean War.

Douglas MacArthur (1880-1964) was born 26 January 1880, at the Arsenal Barracks in Little Rock, Arkansas. His father was Arthur MacArthur, Jr. (1845-1912), an officer who won the Medal of Honor during the Civil War, and would later rise to the rank of General. MacArthur grew up on several frontier forts and attended the West Texas Military Academy in San Antonio, Texas. In 1899 he entered the US Military Academy where he graduated with top honors and began a long relationship with the institution. As a junior officer, MacArthur served in the Corps of Engineers in various posts across the US and the Philippines. In 1914, then Captain MacArthur was part of the General Staff headquarters during the Veracruz expedition, where he distinguished himself by locating railroad locomotives that were needed to transport troops. During the mission, MacArthur were attacked numerous times, but he led the detachment to safety. He because of his courage under fire, MacArthur quickly rose in the ranks.

After the United States of America’s entry into the World War I, MacArthur became the Chief of Staff of the newly created 42nd Infantry Division, nicknamed the "Rainbow Division," because soldiers came from across the entire US. Once the division arrived in France in November 1917, MacArthur assisted in training the unit before it entered combat (February 1918). During the Champagne-Marne campaign (15-18 July 1918), MacArthur personally led at least four raids of German trenches that resulted in the capture of German prisoners of war, and MacArthur was decorated for his actions. On one raid in March 1918, MacArthur was gassed when he forgot his gas mask, but he later recovered from the injuries. In August 1918, MacArthur earned a promotion to brigadier general and took command of the 84th Infantry Brigade under the 42nd Infantry Division. He commanded the 84th during the St. Mihiel Offensive, the Meuse-Argonne Offensive, and the Sedan Offense.

During these battles, MacArthur displayed expertise in tactics as well as heroism and bravery. He usually led his troops from the front, sometimes without weapons or gas masks as a means to raise their morale. MacArthur was also fond of conducting reconnaissance of areas, sometimes alone, to ensure his knowledge of the battlefield. For his actions in the war, MacArthur earned seven Silver Stars, two Distinguished Service Crosses, one Distinguished Service Medal, two wounded chevrons, two Croix de Guerre, and was appointed commandeur of the Legion d’honeur. In early November 1918, MacArthur took command of the 42nd Infantry Division; however, the war soon ended and he returned to the 84th Infantry Brigade during the occupation of Germany. A media star, he was welcomed home as a hero in the US. His conduct during the war served as stepping stone for his continued rise in the American military during the inter-war years and World War II.

After World War I, MacArthur was selected to be the Superintendent of the US Military Academy, where he restructured the academy’s curriculum based on lessons learned during the war. By 1930, MacArthur had risen to Chief of Staff of the Army. In the mid-1930s, he retired from the US Army and supervised the creation of a Philippine Army. During World War II, MacArthur was appointed Supreme Commander of the Allied Forces in the Southwest Pacific Area. In August 1945, MacArthur accepted the Japanese surrender in Tokyo harbor.

After World War II, MacArthur served as Allied commander of the Japanese occupation where he introduced democracy to the island. In 1950, MacArthur again became the Supreme Commander of United Nation forces during the defense of South Korea. By 1951, President Harry Truman (1884-1972) relieved MacArthur because of the insubordination and disputes on strategy, and he finally retired from the Army. He lived his final years in New York City, and died in Washington, D.C., in 1964. His obituary in the New York Times aptly summed up McArthur’s leadership style, “Exhibiting daring and dash - frequently to the annoyance of his superiors - he savored the excitement of war and the dangers of combat.”[1] 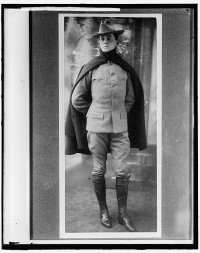