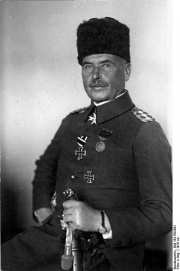 Liman von Sanders was the head of the German military mission in the Ottoman Empire from December 1913. As the commander of the 5th Army he was in charge of the defence of Gallipoli. In March 1918, he took over the command of the “Heeresgruppe F“ in Palestine.

After graduating from high school in 1874, Otto Liman von Sanders (1855-1929), the son of a merchant and owner of a manor, joined an infantry regiment in Hessen and started his military career. He would spend almost ten years in the German General Staff. In June 1913, on the occasion of the 25th anniversary of William II, German Emperor’s (1859-1941) accession to the throne, he was raised by the German Emperor to peerage and took the name “Liman von Sanders”. Liman rose to international prominence in December 1913, when, upon the request of the Ottoman Empire, William II appointed him head of the German military mission in Constantinople in order to reorganize the Ottoman army after the Balkan Wars. Liman von Sanders was placed in command of the First Army Corps of the Ottoman army, which resulted in considerable Russian protests (“Liman von Sanders crisis”), because Russia saw a threat to its vital interests in the Black Sea and the Straits. William II finally gave in and Liman von Sanders was appointed general inspector of the Ottoman army without being in charge of any army command. In spite of this concession, relations between the Russian Empire and Germany would remain seriously strained, because the influence of the German military was unaltered. However, substantial improvements could hardly be expected in the short period of time between the end of the Balkan Wars and the outbreak of World War One.

From Gallipoli to Palestine↑

After the Ottoman Empire had entered World War One, Liman was the commander of an army corps in Constantinople. He rejected the request by Ottoman Minister of War Ismail Enver Pasha (1881-1922) who wanted him to be in charge of the command of the Ottoman winter offensive in the Caucasus in 1914/1915. This is just one example that shows the permanent struggle of Ottoman and German officers over issues of competency. These conflicts were often due to Liman’s harsh character and capricious personality. He repeatedly urged the Kaiser to recall him from his post, but William II would not comply with his request. However, he also had similar and permanent controversies with German military and non-military authorities in Constantinople.

After their operation failed at the Dardanelles, the Entente powers tried disembarking near Gallipoli in April 1915. For the defence of the Straits, the Fifth Army was built up in a hurry and put under Liman’s command, who appointed almost exclusively Ottoman officers into his general staff. After heavy fights with considerable losses for both war parties, the Entente powers withdraw their troops in December 1915 and January 1916. Liman’s merits for the defence of Gallipoli are in dispute, particularly in contrast to the importance of Ottoman commanders such as Mustafa Kemal (1881-1938), for the outcome of the operations. The same holds for the defence of the Straits, which the Ottoman army had already set up during the Balkan Wars.[1]

In March 1916, the headquarters of Liman’s 5th Army, which had suffered heavy losses in Gallipoli operations, were transferred to the Marmara Sea. It had to secure the coastline from the Black Sea to the bay of Antalya because most of the islands were occupied by the Entente. Unfortunately for Liman, his army would only be used to complete and fill up the ranks of other armies. The repeated warnings he sent to the German High Command because of the instable and insecure situation at the Dardanelles in particular were not taken into consideration, but on the other hand, the military situation in general remained rather calm. In early 1917, the German military mission became an administrative unit in the rear area for all German soldiers in the Ottoman Empire.

In March 1918, Liman became commander of the Army Group F (Yıldırım) in Palestine and in Syria. However, in the Battle of Nablus (Battle of Megiddo) (September 19-21, 1918) it could not stop the British advance, and the Ottoman front in Palestine crumbled. After the end of the war, Liman organized the repatriation of German troops and was arrested by the British in February 1919 when attempting to travel back to Germany. He was held in custody in Malta for more than six months. The charges brought up against Liman asserting he had been involved in war crimes against Armenians and Greeks could not be proved, however. In November 1916, Liman had even been amongst the few high-ranking German officers who had successfully intervened in order to protect the Armenian population in Smyrna.

Liman was one of the most important German officers at the Ottoman front during World War One, and a controversial figure among his contemporaries and historians alike. In the permanent struggle of German and Ottoman authorities over competence issues he often lacked tact and diplomatic skills. On the other hand, it remains an interesting question as to how he finally managed to remain the head of the German military mission in the Ottoman Empire despite his repeated requests to be recalled from his post.