A classic representative of pre-1914 Prussian officer education, Kuhl was a rising star within the peacetime general staff. Throughout the war, he served as chief of staff in three German armies and one army group on the Western Front. From 1918, Kuhl worked as an expert witness for the parliamentary enquiry commission on the war and engaged in military writing.

When Herman Kuhl joined the Westphalian 53rd Infantry in 1878, he had already graduated from university and held a Ph.D. in medieval philology – a notable exception to the army’s usual career pattern. After graduating from the Prussian military academy, he became a staff officer and a prolific teacher. Promoted to major general in 1912, Kuhl was ennobled the following year. In 1913, he assumed command of the general staff’s military history sections.

Chief of Staff on the Western Front↑

With mobilization, General von Kuhl was appointed chief of staff of the First Army under Alexander von Kluck (1864-1934). Fighting on the right wing of the main attacking force through Belgium and into France, Kluck’s army rushed into a critical situation in early September at the Marne: it had lost contact with the left wing and faced a French counter-attack in the flank. After the war, Kuhl argued that offensive action would have cleared this situation and saved the day for the Germans, if it had not been spoiled by the order of Helmuth von Moltke’s (1848-1916) Supreme Command to retreat.

Promoted to lieutenant general in 1915, Kuhl briefly served as chief of staff of the Twelfth Army followed by the same position in the Sixth Army in Flanders and the Artois. The latter posting was partly motivated by headquarters’ desire to place a “Prussian watchdog” next to the army’s commanding general, Rupprecht, Crown Prince of Bavaria (1869-1955).

On 28 August 1916, Kuhl was appointed chief of staff of the newly formed Army Group Kronprinz Rupprecht von Bayern which took command of the front between the Channel and the Somme. He fought with the army group through the ongoing Battle of the Somme, during the defensive battles in Flanders in 1917, and the German Spring Offensives of 1918. Politically, he did not expose himself during the war and revolution. During the controversy between his superior Rupprecht and the High Command’s generalissimo Erich Ludendorff (1865-1937) on war aims and peace prospects in 1918, Kuhl managed to remain in an intermediary position. With his resignation in 1919, Kuhl was promoted to general (General der Infanterie).

As a decommissioned soldier and a trained historian, Kuhl was able to establish himself as a sought-after armchair general and defense intellectual after the war. In 1919, he was appointed as expert witness to the parliamentary enquiry commission on the causes of defeat. He took a moderate apologetic position, disputing with his liberal peer in the commission, the Berlin historian Hans Delbrück (1848-1929), while at the same time keeping his distance from the more extreme proponents of the “stab-in-the-back” explanation.

Kuhl’s influence on German official history cannot be underrated. His proactive attitude in cooperation with the Reichsarchiv ensured that his personal performance during the controversial Marne campaign of 1914 was interpreted in a positive light. It also resulted in Kuhl’s appointment to the Reichsarchiv’s academic advisory board in 1924. His publications are typical of the work of general staff members, defined by precision and lack of contextualization. Kuhl was one of the few generals who received the German order of merit “Pour le mérite” in both the military (1916) and the civilian (1924) class. 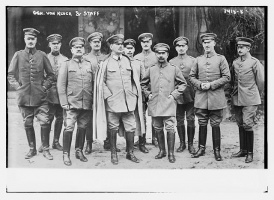 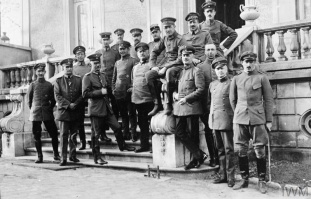