The German light cruiser Königsberg made its name at the Battle of Zanzibar. After being scuttled, its guns were used by the German Schutztruppe to continue the Guerrilla campaign in East Africa.

The Battle of Zanzibar↑

The Königsberg, launched in 1905, was the lead ship in a class of light cruisers built by the German Navy. In April 1914, the ship was deployed to German East Africa for two years. With the outbreak of war, the ship was deployed to raid British and French shipping, scoring its biggest success when it sank the HMS Pegasus during the Battle of Zanzibar on 20 September 1914. Following this engagement, the ship retreated into the Rufiji delta (around 200 kilometres south of Dar es Salaam), for repairs. British ships intercepted German attempts to resupply the Königsberg.

After the Battle of Zanzibar↑

British cruisers finally located the German vessel on 11 July 1915, severely damaging her and forcing the crew to scuttle her. However, before the ship was sunk, German forces salvaged all ten of her guns and converted them into field and coastal guns for use in the East Africa campaign. The crew of the ship also joined Paul von Lettow-Vorbeck’s (1870-1964) Schutztruppe to continue the fighting on land. When Lettow-Vorbeck’s troops surrendered on 25 November 1918, only two artillery officers remained from the crew of the Königsberg, Lieutenant Hans Apel and Lieutenant Richard Wenig. The rest had died during the campaign or were interned in Egypt. After the war the surviving crew members of the Königsberg marched through the Brandenburg Gate in Berlin with Lettow-Vorbeck and the rest of the German troops of the Schutztruppe to a heroes’ welcome. After some failed attempts to salvage her, the Königsberg sank into the Rufiji riverbed in 1966. 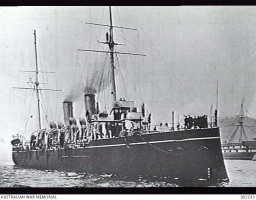 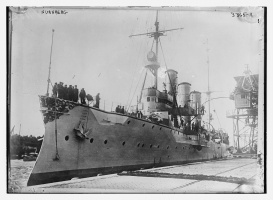 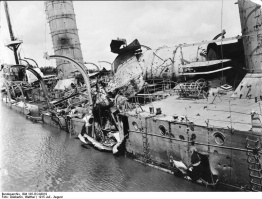 Wreck of the S.M.S. Königsberg