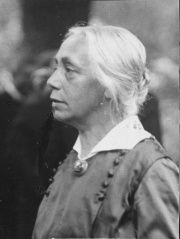 The German artist Käthe Kollwitz became one of the most influential artists of her generation. Her work often addressed the atrocities of war and emotional pain associated with human loss and suffering. A formidable printmaker and sculptor committed to social realism, she created a number of widely distributed anti-war images following World War I.

The German artist Käthe Kollwitz (1867-1945), born in Königsberg, Prussia, became one of the most influential artists of her generation. In 1919, she was elected as the first female member of the Prussian Academy of Art in Berlin, where later she served as the head of graphic arts. Her work in both printmaking and sculpture addressed in overt, social realist terms the psychological impact and human cost of war. This topic was autobiographical and spanned both world wars, as Kollwitz’s youngest son Peter Kollwitz (1896-1914) was killed as a volunteer enlistee in Dixmuiden, Belgium, in October 1914, and her eldest grandson was killed in action in Russia in 1942.

As a young woman, Kollwitz showed early talent for drawing. In 1881-82, she took her first art lessons with the engraver Rudolf Maurer. In 1885-86, Kollwitz trained at the School for Women Artists in Berlin, and later studied at the Women’s Academy in Munich. In 1891, she married Dr. Karl Kollwitz (1863-1940), who established his general practice in the Berlin neighborhood of Prenzlauer Berg, to serve its high population of the industrial poor. In 1892, their first son Hans Kollwitz (1892-1971) was born, the subject of Kollwitz’s first lithograph, and in 1896 they had their second son, Peter. Consistently committed throughout her life to social justice causes, Kollwitz created her first major engraving series, A Weavers’ Uprising, 1893-1897, for which she was to be rewarded with a medal at the Große Berliner Kunstaustellung, until Wilhelm II, German Emperor (1859-1941) intervened to prevent Kollwitz receiving the award. For the next five years Kollwitz taught drawing and engraving at the Women’s Academy in Berlin. Active in the local arts community, she also became a member of the Berlin Secession from 1901 to 1913. In 1908, she completed her third print series entitled Peasant’s War, featuring the problems of the proletariat, a topic that she explored further in freelance work for the Munich-based satirical illustrated weekly Simplicissimus.

World War One and Beyond↑

A socialist without overt political affiliation before the war, Kollwitz’s position concerning World War I shifted to more pronounced pacifism after the death of her son Peter. During the war, she worked for many years on drawings and models for a memorial sculpture to honor Peter and other young soldiers, commemorating this loss with two sculptures of mourning parents, modeled after the facial features of her and her husband. Kollwitz’s letters during this time, addressed in some cases to Peter, express the deep emotional pain associated with losing a child, a topic that she had explored well before the war in both prints and drawings, a subject that persisted throughout her life. In 1917, marking her 50th birthday, there were several exhibitions of Kollwitz’s work, including a large-scale retrospective hosted by the Paul Cassirer Gallery in Berlin. Following this tribute, Kollwitz embarked on work that illustrated some of the most pointed political messages of her oeuvre including the cycle of prints titled War, 1918-1922. This coincided with her affiliation with another important artists’ community in Berlin, the Arbeitsrat für Kunst, which helped to facilitate the commission for her commemorate print honoring the assassinated communist Karl Liebknecht (1871-1919). In 1924, commemorating the ten-year anniversary of the start of World War I, Kollwitz participated in a multi-artist project to protest war by creating a print that featured a stark, agitated youth paired with the motto “Nie Wieder Krieg” (Never Again War). Today, a large-scale replica of Kollwitz’s sculpture Mother with Her Dead Son, 1937, serves as a memorial to victims of war and dictatorship at the Neue Wache on Unter den Linden in Berlin.