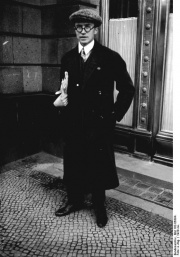 The German poet Klabund emerged as a lyrical war propagandist during the first two years of the conflict. He moved to Switzerland in 1916 where he announced his conversion to pacifism. In July 1917, Klabund’s open letter to Emperor Wilhelm II established his reputation as an anti-war writer. Recent scholarship has revealed that Klabund, while mingling with German expatriates in Switzerland, also worked as an informer for German military intelligence.

Born as the son of a Brandenburg pharmacist, Alfred Henschke (1890-1928) studied chemistry, and later philosophy and drama, in Munich. In 1912, he abandoned university and chose to become a professional writer. Under the pen name “Klabund”, he quickly delved into the cosmopolitan bohemia in the Bavarian capital.

In August 1914, Klabund volunteered for the army, but was refused for persistent tuberculosis. During the following two years, he published plays and anthologies of pro-war, patriotic poetry. Several of his poems in Soldatenlieder (1914), Kleines Bilderbuch vom Krieg (1914) and Dragoner und Husaren (1916) contain hate speech and express violent xenophobia. Due to his deteriorating health, Klabund moved to Davos in neutral Switzerland.

Pacifist Turn and Involvement in Intelligence↑

Following medical treatment, Klabund moved to Zurich, then an intellectual refuge for pacifists and socialists from all over Europe. He quickly came into contact with the German-speaking literary community, among them Paul Cassirer (1871-1926), Ludwig Rubiner (1881-1920), and René Schickele (1883-1940). On 3 July 1917, Klabund published an open letter to Wilhelm II, German Emperor (1859-1941) in the Neue Zürcher Zeitung. Referring to Wilhelm’s recent claim for peace and promise of constitutional reform in his Easter Message of 7 April, Klabund urged the monarch to resign and thus prepare the way for a national, democratic reawakening. The publication brought him widespread recognition among the émigrés and put him on the watch list of the political police in Germany. During a visit to Bavaria, Klabund was briefly arrested in September 1917, but was soon released without charges. Back in Switzerland, he began organizing a league of German intellectuals in Switzerland (Bund der deutschen Geistigen in der Schweiz). Klabund’s political stance during the rest of the war remained pacifist yet unorganized. In an open letter to Woodrow Wilson (1856-1924) on 23 October 1918, he urged the US president toward a fair peace.

The idiosyncrasy of Klabund’s political positions and his release from custody in 1917 puzzled contemporaries and literary historians alike. To a certain degree, it might be explained by the fact that Klabund had worked as an informer for German military intelligence, the General Staff’s Abteilung IIIb. The actual nature of his collaboration remains unclear, but the records of Abteilung IIIb prove that an intelligence agent in the border town of Lindau had arranged for his release, provided Klabund with travel permits for Switzerland and acknowledged his value as an informer.

Without exposing himself politically in 1918/19, Klabund got through the violent days of revolution and counter-revolution in Bavaria. His work took the form of poetry, historical prose and plays – among them Der Kreidekreis, later interpreted and staged by Bertolt Brecht (1898-1956) – and adaptations of Asian poetry. Klabund upheld his reputation as a solitary literary figure until his death in 1928. Though his works received attentive editions in the past, Klabund’s literary legacy remains rather limited.