Founded in 1889, Sektion IIIb (1915-1918: Abteilung IIIb) was the military intelligence component of the Prussian-German general staff. During the First World War, IIIb developed into a hybrid security organization that had to handle a mixed bag of tasks ranging from intelligence and counterintelligence, to press and postal censorship, supervision of the attaché service of allied and neutral countries, and war propaganda.

The organization of Sektion IIIb in 1889 constituted the beginning of a permanent military intelligence gathering process in the Prussian-German army. Its focus was on France and Russia. Great Britain was covered by the navy’s intelligence branch. While IIIb was responsible for the collection of intelligence alone, its assessment was done by several sections with regional responsibilities in the general staff. Its major interest was in mobilization plans, orders of battle, and technical intelligence on railroads, fortresses, and new weapons. Its means were mainly open source intelligence (OSINT), concealed reconnaissance trips by active or retired officers, the reporting of military attachés, and – to a much lesser degree than generally assumed – spies, i.e. human intelligence (HUMINT). The installation of permanent intelligence posts, the Nachrichtenoffiziere, along the borders in 1907 was a first step towards a modern intelligence organization. With a strong federal law enforcement tradition in Germany, a notorious lack of funding, a general low regard for intelligence in the army, and two well-established intelligence organizations in France and Russia, IIIb faced a complicated task.

During the war, IIIb was headed by Walter Nicolai (1873-1947), who was given leave at the end of the war as a lieutenant colonel. The changing character of the conflict from a war of maneuver to a positional war initiated a fundamental restructuring of the intelligence process and its institutions. The assessment sections of the general staff converted into the Nachrichtenabteilung (not to be confused with IIIb and renamed Fremde Heere in 1917). Sektion IIIb itself was upgraded to a full section (Abteilung IIIb) in June 1915.

With regard to the intelligence disciplines, the war resulted in the dwindling significance of OSINT, a reorientation of HUMINT from classic spies to the organized interrogation of prisoners of war, and the rise of technology, particularly aerial photography and signal intelligence. Covert action and operational deception were two further fields of IIIb’s activities from as early as 1916.

The biggest challenge was arguably the organization of counter intelligence in the vast occupied territories of Belgium, France, Luxembourg, and Russia. Here, IIIb and the army’s executive arm, the Geheime Feldpolizei (Secret Field Police), fought several Allied espionage networks. IIIb had also rather accidentally taken on press and postal censorship at the beginning of the war; here its involvement was ill-conceived and inexpedient.

An assessment of Abteilung IIIb remains ambiguous: under difficult war conditions, the section managed to develop a modern all-source intelligence system from scratch. With its operational focus on France and Russia, it was successful before and during the war against these major enemies. Nevertheless, this focus meant that the global dimension of the war could hardly be understood by IIIb’s one and only intelligence consumer, the general staff. Furthermore, in the absence of an established civilian apparatus for domestic security and propaganda, the general staff assigned these tasks to IIIb for which the institution was neither trained nor suited. Even under the conditions of total war, Imperial Germany refrained from organizing a secret police and its approaches to propaganda remained comparatively late and traditionalist. It is therefore not surprising that IIIb’s performance in these two fields was taken as a negative blueprint by the National Socialist government from 1933 onwards. 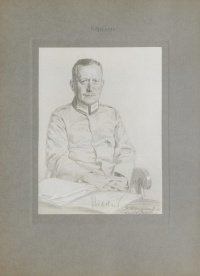