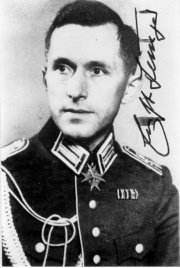 Ernst Jünger was a German writer. His book Storm of Steel (In Stahlgewittern) is considered one of the best-known literary accounts of the experience of the First World War.

Ernst Jünger (1895-1998) grew up in a middle-class German home. Just after finishing his secondary education in 1914, he volunteered and was sent with an infantry regiment to the western front. He was promoted to lieutenant at the end of 1915, and he participated in the Battle of the Somme in 1916, the Battle of Cambrai in 1917, and the Spring Offensive in 1918. The “Stoßtruppführer” (assault group leader) was awarded the Pour le mérite in 1918

Storm of Steel and “New Nationalism”↑

After the war, Jünger served first in the new Reichswehr (German military defense forces), during which time he wrote In Stahlgewittern (1920, english translation: The Storm of Steel, 1929), Der Kampf als inneres Erlebnis (The Struggle as an Inner Experience, 1922), and the novel Sturm (1923). His initially self-published debut, based on his own wartime diaries,[1] described the war from the point of view of a front-line officer. Because of the precise details of the depicted wartime experiences, including the horrors of war, the book was partly received positively by pacifists and among others, had an influence on Erich Maria Remarque (1898–1970), author of All Quiet on the Western Front.

However, that was not Jünger's intention. After leaving the Reichswehr in 1923, he became a prominent character of the soldierly “new nationalism.” In 1924, Storm of Steel was republished in a nationalistic version (which he took back in 1934).[2] The heroical portrayal of a new type of soldier, born out of modern warfare, was now put forward. It was followed by Feuer und Blut (“Fire and Blood”, 1925), Das Wäldchen 125 (1925, english translation Copse 125, 1930), and numerous political articles in nationalistic journals, in which he preached against the Weimar Republic. He wanted a "national", "social", "armed" and authoritarian future state ("state of the front-line soldiers") that would eliminate the "bourgeois order" of the Weimar "system" and work towards a new World War.[3] Jünger’s relations to the Nazi Party were characterized by a certain distance from an early point in time, as his goal was not to affect the masses, but to educate and mobilize a revolutionary elite. He disapproved of the “legalistic” methods of the Nazi Party.

Around 1930, Jünger turned away from direct political agitation. In 1929, Das abenteuerliche Herz ("The Adventurous Heart"), was released as another way of achieving the "German revolution"; at the same time, the book established his literary reputation as an author of "magical realism". Later works, especially his major essay Der Arbeiter ("The Worker", 1932), marked Jünger's "planetary" change of perspective and the beginning of his perception as a time-analytical solitary person who interprets history with a cold "stereoscopic vision".