A philosopher, historian, and journalist (creator of L’Humanité), Jean Jaurès defended the socialist program for workers and small farmers in the Chamber of Deputies and throughout France. Within the Second International, an organisation of socialist and labour parties, he fought against the dangers of war until his assassination and was considered the “Apostle of Peace.”

Jean Jaurès (1859-1914) was a brilliant student at the secondary school in Castres (which was later renamed after him) and at the Ecole Normale Supérieure. He was awarded the agrégé in philosophy in 1881, and received his doctoral degree in philosophy in 1892. He taught at the secondary school in Albi, then at the Faculty of Letters at Toulouse. In 1885, he was elected deputy to the National Assembly from the Tarn department, on the republican ticket opposing the clerical and monarchist right. He thought that the Republic should engage in social reforms in favour of workers and small farmers. Jaurès’ political philosophy evolved towards socialism.

After being defeated in the parliamentary elections in 1889, he became a member of the Toulouse City Council and worked a great deal in education and culture. The miners of the town of Carmaux, who were fighting against the mine’s leaders, made Jaurès their representative in 1893; he was continually re-elected in this position until his death, except for the period 1898-1902. In 1895-96, he became totally committed to the cause of the glass workers in the same industrial region and helped create the Verrerie Ouvrière (Glass Workers’ Cooperative) of Albi, thanks to contributions from all the French unions.

As a historian, Jaurès was in charge of the monumental Histoire socialiste (1789-1900), published in thirteen volumes from 1901 to 1908. In particular, he wrote the four volumes on the Socialist History of the French Revolution. He also helped create the Commission for the Economic History of the French Revolution, responsible for publishing documents on this pioneering subject. As a journalist, Jaurès wrote thousands of articles for a great number of socialist papers and journals, including La Petite République, in which he published a series on Captain Alfred Dreyfus' (1859-1934) innocence that were later collected and published as a book, Les Preuves (1898).

From 1887 to 1914, his articles regularly appeared on the front page of La Dépêche, Toulouse’s newspaper, for a total of 1,312 articles, to which one must add eighty-eight works of literary criticism that he signed as Le Liseur (the Avid Reader). This newspaper was the forum for the Parti Radical, which Jaurès did not hesitate to criticize harshly, although he continued to work with La Dépêche until the eve of his assassination. In April 1904, Jaurès founded the daily newspaper L'Humanité, which called for the unity of the French Socialists, a goal also requested by the Second International. Finally in 1905, a unified Socialist Party was created, the French section of the Workers’ International.

Jaurès travelled throughout France to promote the socialist program, support workers’ strikes and encourage workers to join unions. In the Chamber of Deputies, he was an active supporter of pension legislation, strengthening mine safety, and a weekly day off of work. He also strongly intervened against the state’s repressive policy during strikes. He played a decisive role in the separation of church and state and in the rehabilitation of Dreyfus, which put an end to a case that had profoundly affected the French from 1894 to 1906. During the Dreyfus affair, he had observed the reactionary mindset of many officers. He felt that a profound reform of France’s military organization was needed, which would bring the army and the people closer together by democratizing officer recruitment and by adopting a defensive strategy based on the massive use of reserve troops. He explained his ideas in L’armée nouvelle (1911), a book that has been frequently reprinted.

He also understood that the European nations’ policy of colonial expansion, which served the interests of large capitalist groups, had the potential to lead to war. He criticized the French intervention in Morocco. He also feared that the rivalry between Russia and Austria-Hungary in the Balkans would lead to a war that France would be drawn into because of the system of alliances. He advocated dialogue and mediation between nations and an agreement among the Big Three (France, the UK and Germany) in favour of peace. He pushed the Second International to make the fight against war a priority, and he was one of the keynote speakers at the Basel Congress in 1912.

In France, Jaurès fought against the law extending the length of military service from two to three years, as he judged it to be both provocative and ineffective. Jaurès’ attitude towards the military strengthened the nationalists’ (and the right in general) hatred towards him. Even in July 1914, both in Paris and at the Second International meeting in Brussels, he defended the idea of ​​a “simultaneously and internationally organized workers’ strike” to oppose the war. His last article in La Dépêche (30 July 1914), full of anxiety, was entitled “Oscillating at the Edge of the Abyss.” He was assassinated by a fanatical nationalist on 31 July 1914. The following day, France began the general mobilisation of its troops for war. The whole socialist movement was shocked by the assassination and again in 1919 when the murderer was acquitted.

Jean Jaurès was seen as the “Apostle of Peace.” During the war, many men in the trenches shared soldier Charles Patard's (1884-1966) sentiment, who said “If we had a lot of men like Jaurès, we would not be here today.” 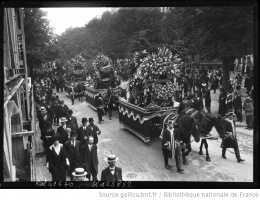