The Spanish flu, the heaviest influenza pandemic in history, coincided with the end of World War One. In Switzerland, the flu had an immense impact on the relationship between the army command, the government and the general population, because the pandemic overlapped with the general strike of November 1918, the most important political and social crisis in modern Switzerland.

The Spanish flu was the heaviest influenza pandemic and one of the deadliest natural disasters in history. Between spring 1918 and summer 1919, more than 50 million people, or 3 to 4 percent of the world's population, died. The first two waves of influenza coincided with the end of World War One, a period of immense political conflict and social trouble all over the world. The flu reached Europe in spring 1918. It was introduced by American soldiers, who landed by ship in the south of France. Not only the warring countries such as the United States, Germany, Britain and France were affected by the pandemic; neutral states also suffered. In Spain, for example, where press censorship was not as strong as in the belligerent states, newspapers reported more openly about disease and death. That is the reason why the influenza pandemic of 1918-1918 got the nickname “Spanish flu”. With 6.2 per 1,000 flu deaths of the total population, Switzerland was one of the European countries which were more severely affected by the pandemic. In contrast to the belligerent countries, in which the pandemic was perceived as a kind of war byproduct, Switzerland experienced a mass extinction for the first time in 1918; this was a singular event for Switzerland in the 20th century. This must have been a reason why conservative circles in Switzerland tried to stylize soldiers who had died of the flu as national martyrs after the First World War.

In Switzerland, the flu first appeared at the beginning of July 1918 among frontier troops near the Jura village Bonfol, where the Swiss border touched the French-German front line. At the same time, in Basel, soldiers who had come back from the border posts fell ill. A rapid spread of influenza within the civilian population in the western part of Switzerland followed. After the first breakout in diverse places, the second wave broke out between the end of September and the end of November 1918. It coincided with the general strike (Landesstreik), the most important political and social crisis in modern Switzerland. This second wave, which affected the eastern and especially the central parts of Switzerland, was the deadliest. A third, lower, wave was observed in January 1919. More than 50 percent of the population was hit by the infection during these three waves. 24,449 people, or 6.2 per 1,000 of the Swiss population, died, which means that the Spanish flu was the gravest demographic catastrophe in modern Swiss history. Despite the great importance for Swiss demographics, medical and social history, the Spanish flu has been neglected in Swiss historiography so far. Apart from the pioneering unpublished thesis by Christian Sonderegger in 1991, an overall view of the topic is missing for Switzerland. By contrast, more recent research is investigating local and regional aspects. As in other countries, the influenza predominantly killed previously healthy young adults, so that the mortality was highest for the group between twenty-one and forty-five years old. The mortality rate was much higher among males, except in the canton Tessin, where more women than men died.

A Great Impact on Politics↑

The government and health system in Switzerland were ill-prepared for a pandemic like the Spanish flu. In particular, the responsibilities were not well-organised between federal, cantonal and communal authorities, which meant that countermeasures were often contradictory. Because the Federal Department of Health expected a more or less harmless influenza, similar to the last pandemic in 1889, their information was very conservative. Various cities opened emergency hospitals and authorised burials within forty-eight hours. Most cantons temporarily closed private and public schools and prohibited meetings and public gatherings, for example religious services, funerals, social gatherings, theatres, balls, and sport events, but restaurants stayed open and public transport remained in service. Postal and phone services were disrupted. Some companies reported that as many as 80 percent of their staff had fallen ill. In a time of insecurity, fear and myths, the newspapers were full of misinformation: almost daily, published articles were repudiated and replaced with counter-information.

Medicine had many successes until shortly before the First World War, in particular bacteriology, but was completely helpless when facing the global flu pandemic. Contrary to initial optimism, the available medical measures turned out to be largely ineffective, which deeply shook the confidence in medicine and physicians. While experimenting in Switzerland, doctors and clinics tried different therapies but had no success. Like politics, medical therapies were inefficient and full of contradictions. By 1918 the only result of the pandemic remained the establishment of a sanitary control at the border. Thus medical authorities tried to protect the country with the help of police agents.

During the last period of World War One, the Spanish flu also had an immense impact on the relations between the army command, government and Swiss population. The first wave, which produced, at its peak, thirty-five victims a day, knocked out the Swiss army. The command of the army was forced to cancel most of the training camps and sent the lion’s share of the troops home. At the same time, the press launched a campaign against the army leadership, especially Colonel Carl Hauser (1866-1956), chief officer of the army medical corps. The corps was poorly prepared for a pandemic. It lacked reasonable accommodation, means of transport and drugs. Seriously ill soldiers sometimes had to sleep on rotten straw, were insufficiently fed and received hardly any medicines.

The outrage in the media and population about these disastrous conditions was so big that the Swiss Federal Council and General Ulrich Wille (1848-1925) both appointed a commission of inquiry. The appointment of a committee did not lead to an improvement in the conditions, but it did gradually calm the souls of the people, for a while. It was only after the First World War had ended and the flu had abated that the parliamentary commission published its report. This report relieved Colonel Hauser in central points and put forward several proposals for the reorganization of the medical services.

The so-called “Hauser” affair was more an expression of the general mistrust between the army leadership and the soldiers along with a wide part of the population than a personal criticism of the chief officer of the medical corps. This mistrust developed especially against the lack of social protection for soldiers and the often-criticized Prussian leadership of the army commanders. The months of October and November 1918 were characterized by a heated, almost civil war-like mood in Switzerland. The political left, against a background of great social distress, threatened with a general strike, and the government and army with the use of troops. Regardless of the fiercely rampant pandemic, strikes with a total of 250,000 participants were conducted. On the other hand, the army called 100,000 men to arms to guarantee national security. After the suppression of the general strike, the army and bourgeoisie, on the one side, and strike leadership on the other, accused each other of having accepted the flu deaths. The army tried, with the construction of various monuments after 1918, to stylize the soldiers who died of the flu as victims of World War One – similar to in France and Germany. In total, 3,000 soldiers died of the flu, more than 900 of them during the national strike. As subsequent studies have shown, the general strike hardly increased flu deaths among soldiers. 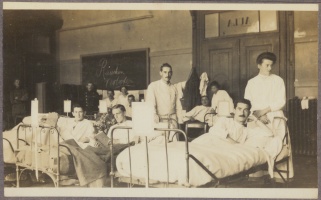