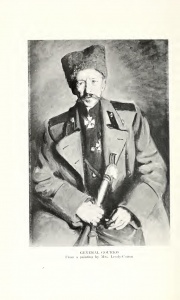 General Vassillii Iosifovich Gurko was a Russian military commander during the First World War. Between November 1916 and February 1917 he was the chief of staff in the General Headquarters of the Russian army.

Vassilii Iosifovich Gurko (1864-1937) was born into a noble Russian family that had served in the Imperial Russian Army for generations.[1] His father, Iosif Vassilievich Gurko (1828-1901), was a famous field marshal of the Russo-Turkish War, 1877-1878. His older brother Vladimir Iosifovich Gurko (1862-1927) was a right-wing Russian politician, later a prominent member of the Russian émigré community.

In 1885, Vassilii Gurko graduated from the prestigious Page Corps and joined the Grodno Hussars Guards Regiment. In 1892, he graduated from the General Staff Academy and occupied various staff positions across Russia. Between 1899 and 1900 he served as the Russian military representative with the Boer Army in South Africa, and in 1901 he served as the Russian military attaché in Berlin. During the Russo-Japanese War he distinguished himself as the chief of staff of the First Siberian Corps and was promoted to the rank of major general. From 1906 to 1911, Gurko served as the chairman of the Military History Committee for Description of the Russo-Japanese War, investigating the reasons for the Russian defeat in 1905. In 1911, he took command of the 1st Cavalry Division.

In 1914, the 1st Cavalry Division took part in the invasion of East Prussia, that ended in failure with the Battle of Tannenberg (August 26-30), although Gurko managed to save his troops. A few months after this defeat, Gurko was promoted to the command of the 6th Army Corps on the north-western front. After the German breakthrough at Gorlice, the corps was rapidly transferred to the south-western front. On 22 June 1915, Gurko, on his own initiative, launched an attack on the German South Army of General Alexander von Linsingen (1850-1935). Gurko’s daring actions were successful: the Russians managed to slow down the German advance, taking about 19,000 prisoners.

In December 1915, Gurko was again promoted, this time to command the 5th Army at the northern front, where he took part in planning and managing what turned out to be an unsuccessful operation at Lake Naroch. In March 1916, the 5th Army was intended to advance north of the lake toward Panevėžys, but an attempt to break through German defenses in adverse weather conditions (it was the beginning of the thaw and river flooding), cost the Russian army 78,000 casualties.

Nevertheless, on 27 August 1916, Gurko was appointed commander of the Special Army of the south-western front. The plan was to launch an offensive toward Kovel to build on the success of the Brusilov offensive that took place a few dozen kilometres to the south from June to September 1916. However, the Germans launched a preventive attack on the Special Army in September 1916 and the offensive was never accomplished. The Russians never took Kovel and suffered thousands of casualties.

As the Chief of Staff of the General Headquarters↑

In November 1916, the chief of staff of the General Headquarters of the Russian army (Stavka), General Mikhail Vassilievich Alekseyev (1857-1918), took severely ill and had to recuperate for several months in the Crimea. Alekseyev chose Gurko as his temporary replacement in the Stavka. By that time, Gurko had a reputation for being a decisive and intelligent commander with moderately liberal political views, which was why Alekseyev, who had certain liberal sympathies himself, chose him over more senior and higher-ranking generals.

As the chief of staff, Gurko was often advised from the Crimea by Alekseyev, but he made the decisions himself. He noticeably changed the staff in the Stavka and appointed General Alexander Sergeyevich Lukomski (1868-1939) as quartermaster general of the Russian army. He also conceived of and implemented a reorganisation of the Russian army, reducing the number of battalions in divisions from sixteen to twelve in order to create more mobile formations.

As a strategist, Gurko followed Alekseyev’s lead in suggesting a plan for a combined Allied offensive in the Balkans in 1917, but this was not supported by the Allies. He took an active part in the Allied conference in Petrograd in January 1917 that was dedicated to the better coordination of Allied actions in 1917. Gurko insisted on the more complex approach of the distribution of Allied resources and offensive co-ordination.

After Alekseyev’s return to the Stavka in February 1917, Gurko resumed command of the Special Army.

After the February Revolution↑

In March 1917, Gurko took command of the western front, succeeding General Aleksei Ermolaevich Evert (1857-1918). As the front commander, Gurko tried to restore discipline among the troops, but in May 1917, he addressed the Provisional Government saying that he could not guarantee the success of any military operation. As the result he was removed from his post.

As a persuaded monarchist, Gurko exchanged letters with Nicholas II, Emperor of Russia (1868-1918) after his abdication. In August 1917, Gurko was arrested on the orders of the Provisional Government and interned in the Peter and Paul Fortress in St Petersburg. In October 1917, he was expelled from Russia.

Despite multiple suggestions and calls from the White Army commanders, Gurko chose not to take part in the Russian Civil War, which he saw as a destructive, fratricidal conflict. He actively participated in the All-Russian Military Union (ROVS) – the largest Russian military émigré organisation. He also contributed to the military magazine, “Chasovoi” (Sentry), where he wrote mostly about the past war. He settled in Rome, where he died in 1937, and was buried in the Testaccio Cemetery.