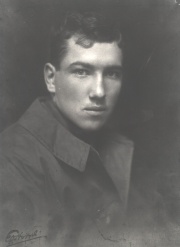 Robert Graves was a British writer who enlisted in August 1914. He fought at the Battle of Loos in 1915, and was wounded at the Somme in 1916. He published his first volumes of poems during the war, and his bestselling war memoir, Goodbye to All That, in 1929.

Robert Graves (1895-1985) was born in Wimbledon in 1895, the third child of Alfred Perceval Graves (1846-1931) and his second wife Amy von Ranke Graves (1857-1951). His father was an Irish poet and minor figure in the Irish Literary Revival of the late 19th and early 20th centuries. His mother was German, and a great-niece of the renowned 19th-century historian Leopold von Ranke (1795-1886). Graves was educated at Charterhouse School between 1909 and 1914. Initially bullied because of his half-German ancestry, he learned to box, and became involved with the school’s poetry society. In 1911, he began to publish his first poems in the school magazine, The Carthusian. He also formed an important friendship with a young master there, George Mallory (1886-1924), who later died in the 1924 Everest expedition. Mallory introduced Graves to the work of modern authors such as George Bernard Shaw (1856-1950), Rupert Brooke (1887-1915) and John Edward Masefield (1878-1967), and, as Graves says, in the spring of 1913, “did something better than lend me books, and that was to take me climbing”.[1]

Graves left Charterhouse on 28 July 1914, holding an exhibition to read classics at St John’s College, Oxford. Instead, he enlisted in the army within a few days of the declaration of war on 4 August, and left home to join his regiment, the Royal Welch Fusiliers, in Wrexham on 12 August. He was posted to France in May 1915, and fought in the Battle of Loos in September that year. In November 1915, he met a fellow-officer in the Royal Welch Fusiliers, the poet Siegfried Sassoon (1886-1967), forming an important friendship which lasted – if uneasily – until their bitter quarrels in the aftermath of the publication of Graves’s war memoir Good-bye to All That in 1929.[2] Graves presents himself in his memoir as the voice of experience compared to Sassoon, with longer frontline service, and with a poetic idiom that already eschewed the romantic in favour of the realistic depiction of war.[3]

In later years, Graves edited his war poems, particularly those from Over the Brazier (1916), Goliath and David (1917), and Fairies and Fusiliers (1917), out of his various Collected Poems, but he thereby does the early work a disservice, particularly given its influence on other poets of the time. In “Two Fusiliers”, for instance, the celebration of friendship with Sassoon – “Show me the two so closely bound / As we, by the wet bond of blood, / By friendship blossoming from mud...”[4] – pre-empts some of Wilfred Owen’s (1893-1918) homoerotic evocations of male bonding in wartime. Owen described Graves’s technique in Fairies and Fusiliers as “perfect”, writing to Sassoon in 1917 that “I should never stop if I started to rejoice over these poems”.[5]

On 20 July 1916, Graves was wounded by a shell at High Wood. His colonel, believing his injuries to be fatal, wrote a condolence letter to Graves’s parents, and he was mistakenly reported as “Died of Wounds” in The Times on 4 August 1916. This “death” and “rebirth”, occurring around the time of his 21st birthday, had a profound effect on Graves’s life and writing, underpinning his later development, particularly following his own son John David Graves’s (1920-1943) death in World War II, of a complex “White Goddess” mythology which enshrines within it cyclical structures of service, sacrifice and renewal.[6]

The injuries effectively marked the end of his frontline service (although he did contrive to return briefly to France for a few weeks in January 1917) and he was convalescent in England when news reached him of Sassoon’s famous July 1917 declaration “Finished with the War”.[7] Graves took credit for rigging a medical board for Sassoon in order to save him from court-martial. Sassoon was instead sent to Craiglockhart, thereby encountering Wilfred Owen for the first time. Graves himself, meantime, seeking to distance himself from the homoerotic friendships of recent years, married the eighteen-year-old artist Nancy Nicholson (1899-1977) in January 1918. “[M]y affections”, he told Robert Nichols (1893-1944), “are running in the more normal channels”.[8] Following a brief posting to Limerick, Graves was demobilized from the army in February 1919.

D.N.G. Carter has persuasively argued that "Graves’s life and work may be justly considered as a heroic attempt on the part of one man to wrest a personal salvation from a world turned upside-down".[9] Graves’s post-war personal life was colourful, even dramatic, as he established himself between 1920 and 1970 as one of the more eccentric but nevertheless most important figures in 20th-century English letters. Following publication of his war memoir in 1929, he cut ties with England, establishing a new home in the village of Deià in Majorca, where, apart from the period of displacement caused by the Spanish Civil War and Second World War, he remained resident until his death. Of the sixteen Great War poets commemorated on a stone in Westminster Abbey’s Poet’s Corner, Graves was the only one still living when the memorial was unveiled in November 1985.[10]