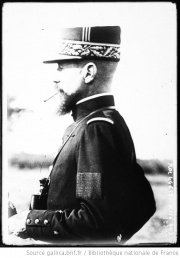 Henri Gouraud was one of the most important French generals during the First World War, commanding on the Western Front and in the Dardanelles. Prior to World War I, he served as an officer with the French colonial troops.

Eldest son of Marie Portal (1844-1918) and Xavier Gouraud (1837-1906), a Parisian doctor, Henri Gouraud (1867-1946) studied at the Collège Stanislas de Paris, where his father also worked. He then decided to enter Saint-Cyr Military Academy in 1888. After graduating in 1890, he pursued an overseas posting, which did not fall into place until 1894, when he was sent to French Sudan. He became instantaneously famous after capturing Samory Touré (1830?-1900) in Guelemou on 29 September 1898. This was a pivotal moment for the conquest because it marked the end of the last large state that opposed French colonialism in West Africa. Feted in the highest political circles of Paris, Gouraud was introduced to the parti colonial and, thanks to this patronage, enjoyed substantial success in the French colonial troops (1900). He pursued a career across French Africa with postings in Niger and Chad (1904), Mauritania (1907) and Morocco (1911), where he was promoted to general de brigade by General Louis-Hubert-Gonzalve Lyautey (1854-1934). Gouraud was placed at the head of the Fez military region and commanded all French colonial troops in western Morocco from 1911 to 1914.

General in World War I↑

In August 1914, Gouraud decided to return to France. First posted in Argonne at the head of the 10th Division, he served as chief commander of the Garibaldian troops and briefly commanded the Colonial Army Corps. In May 1915, he replaced General Albert d’Amade (1856-1941) as the head of the French Expeditionary Corps in the Dardanelles. However, shortly thereafter, on 30 June 1915, he was wounded on the Seddul-Bahr beach and had to have his right arm amputated. He then resumed command of the 4th Army on the Western Front. In 1917, he was obliged to replace his former superior as resident general de France in Morocco when Lyautey became the French minister of the war. He returned to the 4th Army in June 1917. Using the elastic defence military strategy during the Second Battle of the Marne, he stopped General Erich Ludendorff’s (1865-1937) Friedensturm on 15 July 1918, marking the “turn of the war”. On 22 November 1918, Gouraud entered the city of Strasbourg and overthrew the Soviet government that had been proclaimed on 11 November 1918.

In November 1919, Georges Clemenceau (1841-1929) sent Gouraud to Syria as the high commissioner of the French Republic to command the British relief troops. From the start, he tried to compromise with Faysal I, King of Iraq (1885-1933) but decided to fight him after Faysal was proclaimed king of Syria. The Battle of Khan Maysalun (24 July 1920) ended the Hashemite project in Syria. At the same time, Kemalist forces attacked the French troops in northern Syria. The Kemalist forces refused to accept the Treaty of Sèvres (10 August 1920) and forced the withdrawal of French troops, reaching an agreement with the Angora Treaty in 1921. At the same time, Gouraud founded the State of Greater Lebanon on 1 September 1920, followed by the founding of the state of Aleppo and the Alaouites Territory.

After returning to France in 1923, Henri Gouraud became military governor of Paris (1923-1937) and served as a formal member of the War Council until his retirement in 1937. He died in Paris in September 1946.