In 1830, Belgium constituted a Garde Civique or Civic Guard, a national institution to be deployed both for maintaining law and order and for territorial defence. In 1914, the Garde Civique hardly had any military weight, but rumours about German reprisals against these uniformed civilian soldiers engendered quite a lot of tension.

In 1830, Belgium created a Garde Civique, which was to be deployed for maintenance of law and order. In wartime, the Garde could also be used for territorial defence, but according to the Belgian constitution of 1831, this was only possible after parliamentary mobilisation.

From 1848 onwards the Garde Civique was only operational in large cities and industrialized areas. Elsewhere, non-active units were organized on paper. Contrary to popular belief, most men did not volunteer for the citizen army. Infantry membership was mandatory for all adult males who had not fulfilled their military duties and could afford to buy their uniforms.

After 1897, the institution would mainly act as military reserve force, but concrete tasks for the Garde Civique in times of war were never determined. The 1909 and 1913 military reforms sealed the institution’s fate in Belgium. Indeed, the introduction of compulsory military service sent most of the male population to the army, which caused the Garde Civique numbers to stagnate. Moreover, the army’s broader recruitment cancelled the need for a back up or reserve force. On the eve of the First World War, the Belgian Garde Civique was the only remaining European citizen army.

1914: Territorial Defence or Maintenance of Order?↑

On 4 August 1914, neutral Belgium was attacked by Germany. The Belgian parliament held an urgent meeting that same day to vote on a large number of emergency laws. However, they did not vote on the expected mobilisation of the Garde Civique; the Belgian government deemed this unnecessary, as the units were not expected to take part in the country’s military defence.

In the absence of formal mobilisation, the minister of the interior remained responsible for more than 46,000 guardsmen. The military did ask some units to perform guard duties, but this happened without any coordination whatsoever. Civilian orders and military counter-orders made for total confusion. In the forts around Liège, Namur and Antwerp the Garde Civique took over a number of military safeguarding tasks, but nobody actually knew how to deploy these largely untrained civilian soldiers.

Unavoidably, the border region soon saw a confrontation between the Garde Civique and the German army. On 9 August, men from Sint-Truiden opened fire on a German military vehicle. There were some German casualties, amongst them a high-ranking officer. The next day some 150 Guards were taken prisoner and sent to Germany as prisoners of war (POWs).

During the first days of the war, the part played by the Garde Civique was mostly limited to the maintenance of law and order. Policemen had joined army ranks, and garrison troops and gendarmerie had left for the front, so the Garde was the only armed force remaining for many cities and local authorities. They guarded banks and shops, prevented looting and, frequently, controlled citizens.

Moreover, for the first time, the royal decree of 5 August activated the entire non-active Garde Civique at once. Some 100,000 men were called up to constitute control posts in their municipalities. The non-active Garde Civique did not have uniforms; the men were to supply their own uniforms and weapons. They improvised, and the Belgian press regularly wrote about hardly uniformed civilians, armed with unorthodox weapons.

In the Line of Fire↑

As these news reports could very well give the impression that Belgian authorities were organizing a popular insurrection or Volkskrieg against the German invading army, the government quickly interfered. On 8 August 1914, a uniform was imposed and the overt carrying of weapons was ordered. Through this, the government wanted to highlight that these units fulfilled all the conditions set by the 1907 Hague Convention on land warfare and were therefore to be recognized as a belligerent party.

Wilhelm II, German Emperor (1859-1941) was quite outraged; in his eyes the Belgian government was most definitely organizing a Volkskrieg. For the Germans, the reference to the 1907 Hague Convention precisely proved that civilians with improvised weapons were going to participate in battle. This immediately conjured up memories of the feared francs-tireurs, French civilians who had fired upon German soldiers during the 1870-71 war. However, the Belgian government never intended to include the Garde Civique in territorial defence, as was explicitly confirmed by the minister of war on 14 August. Corps were disbanded everywhere long before the arrival of the first German troops.

However, the Garde Civique soon became the scapegoat in suspected actions by francs-tireurs. For example, the active Leuven Garde Civique had been disbanded on 19 August 1914, before the arrival of the German army, but was nevertheless accused of organizing an insurrection on 25 August. Some hundred guards were taken into custody and sent to Germany. The same happened to men from several other units, whether recently activated or not, in occupied parts of the provinces of Limburg, Liège and Brabant.

All guards taken prisoner were considered to be belligerents and sent to Germany as POWs. For the benefit of the home front they were paraded as francs-tireurs along the way, as the living proof of a Belgian insurrection led by the Garde Civique. Before summer 1915, everyone was released.

In Belgium, the fate of the civilian soldiers who had fallen in German hands was unclear. On 11 August 1914, the Belgian government heard that German soldiers in Tongeren had hung dozens of guards the day before, and that a German negotiator in Liège had announced that his country would not recognize the Civic Guard as a belligerent party. Both rumours eventually proved false.

However, many guards were convinced that if captured, they would be executed immediately. They believed that the Germans would see them as francs-tireurs. As the enemy advanced, the Garde Civique was hastily disbanded. Registers were burnt and the men disposed of their uniforms and weapons. Only the Brussels Garde Civique was prepared to face the enemy. Trenches were dug and barricades were erected all over the city. Foreign diplomats intervened and the improvised defence was taken down at the eleventh hour, thus avoiding a bloodbath when the German army entered the Belgian capital.

After the army’s retreat in the direction of Antwerp, the Garde Civique had another part to play. The government had finally obtained more information on the fate of the civilian soldiers taken prisoner and decided, on 22 August, to place the Brussels guards under military command after all. Along with some Liège units and four East Flanders corps they now constituted an army group under the command of Lieutenant-General Henri Clooten (1849-1925). Some 18,000 guards, as well as a number of gendarmes and war volunteers, were to defend the region to the south of Antwerp against German scouts and, more importantly, give the impression of a large troop force on location.

However, without formal mobilisation by parliament many deemed this mission quite dangerous and General Clooten had to deal with a good number of deserters fearing German reprisals. Moreover, the general faced suspicion and contempt from the military authorities and interference by local politicians. The campaign lasted for six weeks and about ten guards lost their lives. Finally, the Groupement Clooten also covered the army’s retreat from Antwerp. On 13 October 1914, the guards were told to go home. The motives underlying this decision remain unclear, but, on the eve of the decisive Yser battle, Belgian uncertainty about the fate of the guards who fell into German hands was probably the cause.

Some officers and their men enrolled in the Belgian army and served for the duration of the war. Others fled to France, Great Britain or the Netherlands, and a few hundred tried to return home. In occupied Belgium, members of the former Garde Civique were carefully watched and, until 1918, were to report monthly to the German Meldeämter.

The story of the Garde Civique came to an end on 13 October 1914, but the institution continued to play a symbolic part in the ferocious propaganda war between Germany and Belgium. It was only after the Second World War that German historical research concluded that the Belgian Garde Civique had no francs-tireurs in its midst. The institution was, however, not to witness this rehabilitation. It was not reinstated after 1918 and disappeared forever from the public stage. The Garde Civique was only struck from the Belgian constitution in 1984.

Piet Veldeman, Royal Museum of the Armed Forces and of Military History, Brussels 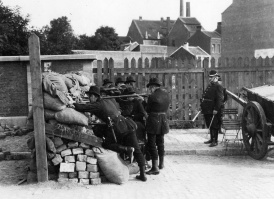 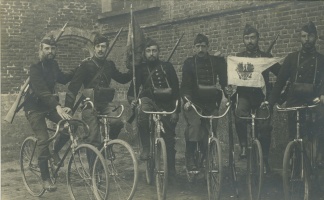 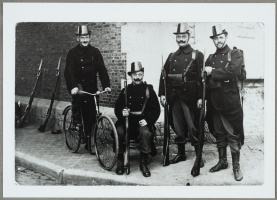 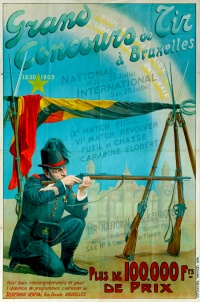 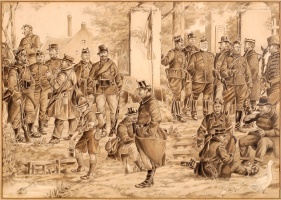 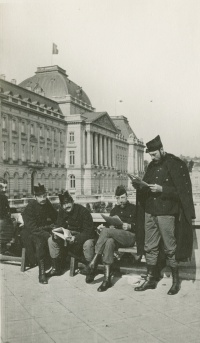 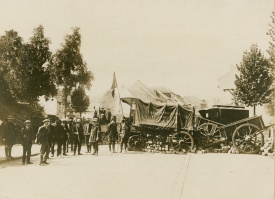 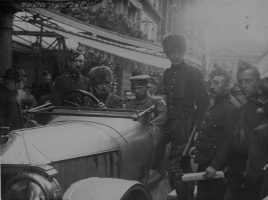 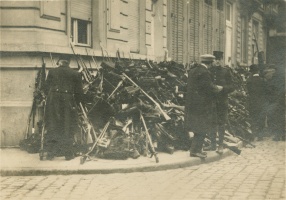