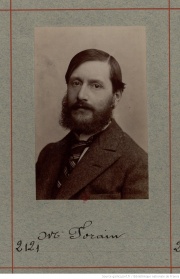 Jean-Louis Forain was a French artist, who specialized in painting, print making, and illustration. Trained at the École des Beaux-Arts in Paris, he showed with the Impressionists. He worked as a caricaturist for a number of French illustrated newspapers. During the First World War, he served in the Section de Camouflage and as a war correspondent. A number of the caricatures he published with the popular press became posters and postcards.

Jean-Louis Forain (1852-1931) was born in Reims, France. As a boy he moved with his family to Paris, where he frequented the Louvre and was exposed to the work of the Old Masters. He eventually studied at the École des Beaux-Arts under painters Jean-Léon Gérôme (1824-1904), André Gill (1840-1885), and Pierre Dumont (1884-1936). He was influenced during this time by the work of Francisco Goya (1746-1828) and the collection of prints at the Cabinet des Estampes at the Bibliotheque Nationale. Goya’s work in particular, would play a major role in influencing his caricatural style during the war. His official training also included a year with the sculptor Jean-Baptiste Carpeaux (1827-1875), who taught him modeling techniques. This period of study, which focused on rendering the human body in multiple media, informed Forain’s prolific work as a draughtsman for the French popular press for the next several decades. In 1876, he published his first illustration, which led to a significant career as a satirical caricaturist for many leading French illustrated newspapers including Le Figaro, Monde Parisien, Revue Illustré, Journal Amusant, Le Gaulois, Courrier Français, Vie Parisienne, Le Rire, and Echo de Paris.

As a painter, Forain exhibited at four of the eight Impressionist exhibitions. His work during this time followed the style and content of his friend Edgar Degas (1834-1917) with an emphasis on dancers, women in domestic scenes, and prostitutes. Forain was a harsh critic of his own paintings, a complicated medium he professed that was difficult to determine if and when it was finished. Nonetheless, with this work, often more candid about social tensions than that of his contemporaries, influenced the style of a younger generation of more socially conscious artists including Henri de Toulouse-Lautrec (1864-1901). Eventually better known to the general public as a prolific printmaker and draughtsman, in 1887, Forain shifted from etching to lithography for the next two decades, a medium he used for posters and political satires of major events such as the Panama Canal Scandal and the Dreyfus Affair. For the latter event, Forain produced work that reiforced the anti-Dreyfusard position, held by many fellow Catholics. His drawings, published in the journal Psst. . . !, overtly reinforced the antisemitic sentiment that fueled the scandal and court case involving the Jewish captain Alfred Dreyfus (1859-1934), who was eventually proven innocent.

The War Years and Beyond↑

During the First World War, when Forain was already in his early sixties, he volunteered to join the Section de Camouflage, founded in September 1914, under the direction of Lucien-Victor Guirand de Scévola (1871-1950). A unit of professional artists, they helped the French military implement innovative camouflage tactics. Under these auspices, Forain served as a war correspondent from December of 1915 to February of 1917, relaying through drawings published weekly in Le Figaro, the experiences of soldiers in the trenches. One of his most famous cartoons published in L’Opinion in January 9, 1915 was titled Inquiétude. Pourvu qu’ils tiennent! . . . Qui ça? Les Civils. The image reflects Forain’s criticism at times for civilians and their lack of commitment to the war effort. Many other drawings created during this time reinforced a patriotic fervor. In 1916, Forain created a series of drawings and prints entitled, La Borne Verdun, which inspired his painting La Borne that illustrates dramatic mass casualties at Verdun.

Today the painting is in the collection of the Musée de l’Armée Invalides in Paris. Additional caricatures produced for the press, which also became postcards, were highly critical of German soldiers. One notable example, La Faim, depicts a hungry mass of French women. In the foreground one woman in particular desperately struggles to lift herself from the ground to request assistance from a German soldier. His comparatively grand size, baton in hand, and unsympathetic, rigid body language imply disdain. Forain’s style was based on an aesthetic of expressive caricature, removed from his earlier painterly work as an Impressionist. Influenced by the compositional style of Goya’s Disasters of War series, with lone figures in a landscape or vignettes of figures in the trenches, Forain paired his visual narratives with witty slogans, a style typical of caricatures for the illustrated popular press.

In 2011, Forain’s oeuvre, including his World War I work, was featured in a retrospective exhibition at the Petit Palais of the Musée des Beaux-Arts de la Ville de Paris. Before and during the the war, Forain also devoted his illustrations and paintings to more politically charged topics including the French court and judicial system, following the work of French artist and social critic Honoré Daumier (1808-1879). In 1920, Forain was was honored to become a member of the Commandeur rank of the Légion d’honneur. 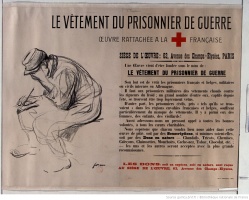 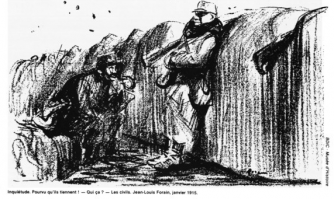