The use of portable flamethrowers in combat was a First World War innovation. The German army took the lead in developing this form of warfare and remained the foremost practitioner of it throughout the war.

In 1914, only the German army deployed flamethrowers. They were regarded as siege equipment and issued to pioneer units. After some relatively ineffectual use in 1914, it was decided to withdraw flamethrowers from frontline service. However, certain officers were convinced of the potential of the flamethrower as a weapon. Foremost among them was Landwehr officer Bernhard Reddemann (1870-1938), formerly the chief fire officer of Leipzig. In late 1914, Reddemann was tasked with setting up a specialist flamethrower detachment. Among his recruits were a number of firemen.

Reddemann was convinced that the flamethrower was best used to add a shock-effect to infantry assaults. His unit carried out its first attack, against the French at Malancourt, on 26 February 1915. In the following month, he was given the opportunity to create and command a larger flamethrower unit, the 3rd Garde-Pionier-Bataillon. This unit benefited from the patronage of Wilhelm, Crown Prince Germany (1882-1951), but the use of flamethrowers also chimed with parallel tactical developments, which saw the creation of experimental infantry storm detachments. Some of these units called on the support of flamethrowers which had been retained by pioneer units in defiance of their 1914 "recall".

Flamethrowers added to the impact of the German offensive at Verdun in February 1916 and proved sufficiently successful to prompt the expansion of Reddemann’s unit to regimental size, as the Garde-Reserve-Pionier-Regiment. This became the principal flamethrower unit in the German army for the remainder of the war. It did not fight as a single entity, but detached individual companies to support important attacks. It saw its heaviest action during the German offensives on the Western Front in 1918, with its personnel making 105 attacks between March and July.

The Germans passed on their expertise to their allies, providing training for the Austro-Hungarian and Turkish armies. The former developed its own models of flamethrower. The British army experimented with flamethrowers but, with the notable exception of a handful of huge, static flame projectors, did not adopt them. However, in the 1918 raid on Zeebrugge harbour, both fixed and portable flamethrowers were employed by the Royal Navy.

The use of flamethrowers in the French army was pioneered by sapeurs who had formerly served as Paris firemen. Their first attack, at Vauquois on 6 June 1915 ended in chaos when their flame attack ignited a German munitions dump. But the French continued to use flamethrower companies in attacks on particularly difficult positions, and to "clean" dugouts bypassed during successful assaults.

The Italian army used French flamethrowers and also some of indigenous design. These were issued to the specialist assault troops of the Reparti d’Assalto (the Arditi), although they found that the bulky equipment circumscribed their preferred fast-moving assault techniques. While flamethrowers have been used in subsequent wars as weapons for bunker and trench clearing, their use in the forefront of the assault is a tactic which remains unique to the flamethrower Pioniere of the Kaiser’s army. 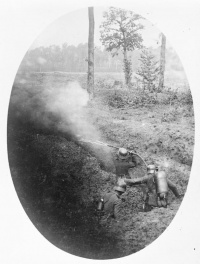 A German flamethrower team in training 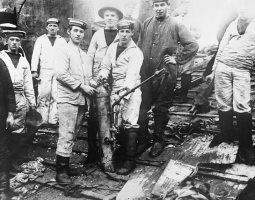 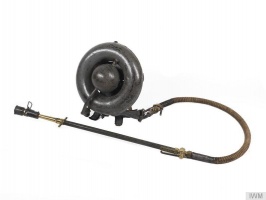 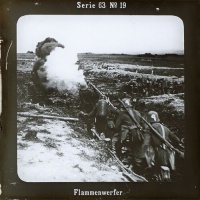