Abel Ferry was a French politician and minister as well as an infantry combatant, who used his first-hand knowledge of the war to try and shape the official war effort. He died as a result of his parliamentary inquiries at the front. His diaries and letters are important sources on the period.

Abel Ferry (1881-1918) was born into one of the most prominent political families in France: his father was a senator, his grandfather a minister, and he was the nephew of Jules Ferry (1832-1893), one of the founding figures of the Third Republic. Accordingly, after studies in History and Law, he enjoyed early success as a politician, being elected to the chamber of deputies for a district of the Vosges (his father’s region, near the German border) in 1909, under the left-leaning affiliation of the “Gauche radicale”.

“War from Above and Below”↑

Following the elections of spring 1914, he became under-secretary for foreign affairs in René Viviani’s (1862-1925) government, and as such took early measures of military preparation when the diplomatic crisis of July 1914 became acute, ordering the emergency repatriation in France of several colonial units. When the war broke out, however, he was sent to the front along with several members of parliament of military age, according to ambiguous regulations regarding the conscription of politicians. This would lead him to see “war from above and below”, as he put it. His first engagement as an under-lieutenant with the 166th infantry regiment was on 25 August 1914 at Étain (Meuse), followed by several bouts of severe fighting, especially in October 1914 in the Woëvre region.

Then, an unusual arrangement led Ferry to navigate back and forth between the front and cabinet meetings, the first of which he attended on 12 December 1914, after the government had returned to Paris. He would continue this dual experience of the trenches and of high political office in the Briand cabinet formed in 1915. He was sent to Morocco in October 1915 on official duties, and was finally relieved of his military role in the summer of 1916.

Returning to the parliament, he became one of its wartime leaders, leading the way in an effort to institute a manner of parliamentary oversight of the army, through inquiries and inspection visits near the front lines. It was during one of these fact-finding missions that he was fatally wounded by a shell, in September 1918.

The “Secret Diaries”: An Important Source on Wartime France↑

His unusual role, useful initiatives and premature death would suffice to make Abel Ferry an interesting public figure of the period. But what sets him apart is the strength of his writings, published long after his death: his so-called “secret diaries” (“Carnets secrets”), and a selection of letters was prepared for publication by his widow, Hélène Berger (1887-1972), in 1957. Later work showed that their contents, already striking, had been somewhat watered down in this first edition, and in 2005 a full, unabridged version was published.

The book, consisting of notes taken during or after government meetings and encounters with leaders, shows the extent of Ferry’s dissatisfaction with the war effort and the council of ministers. It contains scathing criticism of almost every senior authority figure: President Raymond Poincaré (1860-1934), Prime Ministers René Viviani and Aristide Briand (1862-1932), Minister of War Alexandre Millerand (1859-1943) and General-in-Chief Joseph Joffre (1852-1931), among others. Showing the author’s deep attachment to the values and ideals of the French revolution, these diaries reveal Ferry’s impatience with bureaucracy, with the army’s secretive nature and with general mismanagement of resources and manpower. His sincere preoccupation with the human cost of ill-prepared operations is seldom seen or read among wartime leaders, and makes for compelling reading. On a deeper level, they illuminate the inner workings of the French war effort, and the fraught and uneasy relationship between civilian authority and military power in wartime, a dilemma encountered within most belligerent states. 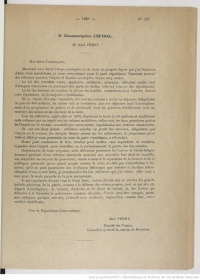