During the First World War both sides accused each other of employing illegal small arms ammunition – either expanding or explosive bullets. The Hague Conventions of 1899 and 1907 outlawed projectiles of these types but, by 1914, advances in ammunition design had made defining them a very subjective process.

Soon after the outbreak of war, German newspapers began to accuse the French, along with the mythical Belgian francs tireurs (free shooters), of using "dum dum" (i.e. expanding) bullets. Their grounds for doing so were flimsy, but soon the British army was embarrassed by an official German complaint that it had issued expanding revolver ammunition. The charge was directed at the .455 Mk IV round, which featured a flat-nosed, unjacketed "man-stopper" bullet. This was hastily withdrawn from frontline service, but other unjacketed .455 cartridges – also likely to expand upon impact – remained in service.

The legal and moral issue was clouded by the fact that similar projectiles were used on other war fronts. Several armies were forced by the exigencies of war to issue elderly rifles, chambered for gunpowder-filled cartridges firing unjacketed bullets. The Turks, Russians, Italians and (in Africa) the Germans used these bullets in action. While it was accepted that such bullets were not outlawed by the Hague Conventions, they did expand upon impact, and could cause worse wounds than any pistol bullet, expanding or not.

A second German allegation was that the standard British .303 Mk VII rifle bullet was specifically intended to have its nose broken off to form a "dum dum". Indeed they went so far as to claim that the finger-grip of the magazine cut-off fitted to the Mk III Lee-Enfield rifle was a device by which this illegal modification could be effected. In this case there was no substance to the allegations.

The Technology of Wounding↑

In the 1880s France revolutionised infantry firepower by creating the first high-velocity, small-calibre cartridge with smokeless propellant. Such cartridges offered greater range, accuracy and ease of aim than the larger calibre, gunpowder-filled ammunition which they superseded. However, it became clear that their bullets had less "stopping power" than the unjacketed lead bullets of the older cartridges.

The Indian army was so concerned about the lack of stopping power that, in 1896, it developed a new hollow-nosed expanding bullet at its arsenal in Dum Dum, an industrial municipality outside Calcutta (hence the generic name for such bullets). Variations of this type entered general service with the British forces, before being withdrawn in the wake of the 1907 Hague Convention, which prohibited the employment of "arms, projectiles, or material calculated to cause unnecessary suffering."[1]

The whole issue was circumvented by France’s (1899) and Germany’s (1905) adoption of ogival bullets with pointed noses. Russia followed suit in 1908 and Britain, belatedly, in 1911. The change from round-nosed bullets was an attempt to improve ballistic performance, but it transpired that it also altered their "terminal ballistics". Because the centre of gravity is at the rear of a pointed projectile, its tendency is to fly tail-first. This is prevented by the spin imparted by the rifling of the weapon’s barrel. On entering a human body, this stabilization is lost, and such a bullet frequently begins to turn around its lateral axis (an effect colloquially known as "tumbling"), causing far more damage to tissue and organs than would be achieved by a straight travelling bullet and, arguably, worse than that caused by "dum dums".

Few in 1914 were aware of the potential wounding power of this new ammunition. Thus the terrible wounds caused by bullets which had "tumbled" were frequently attributed to "dum dums". Inevitably, individual soldiers occasionally attempted to create expanding bullets by such expedients as filing down bullet-tips or reversing bullets in their cartridge cases. But such modifications gave no guarantee of greater wounding; furthermore, they were inherently inaccurate and liable to damage the bore of weapons used to fire them.

From the Allied side, accusations of employment of illegal bullets were directed at Austria-Hungary. This charge related not to expanding bullets, but to explosive ones. The St. Petersburg Declaration of 1868 had outlawed explosive munitions weighing less than 400 grams, but the Austro-Hungarian army issued an 8mm Einschusspatrone (aiming bullet). This featured an explosive bullet intended to facilitate ranging of fire by creating a small but bright explosion upon impact. Claims of its use against human targets appeared in the Allied printed media. More convincingly (and with photographic evidence), it featured in Professor Rudolphe Archibald Reiss’s (1875-1929) published enquiry into atrocities in Serbia. How widespread or officially sanctioned its use was is, however, open to question. 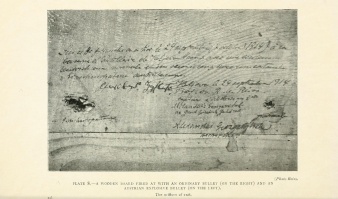 Impact of an Austrian explosive bullet 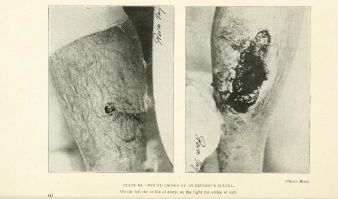 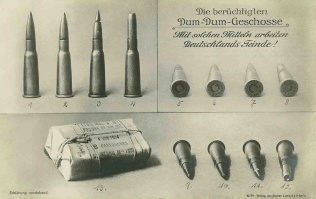