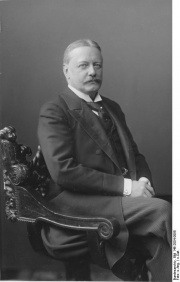 During his career as a diplomat and courtier (knighted count in 1899 and prince in 1905), Bernhard von Bülow became Secretary of State for Foreign Affairs (after 1897) and German Chancellor (1900-1909). He hoped to attain a “place at the sun” for his country with his “policy of free rein” and “Weltpolitik”.

Bernhard von Bülow (1849-1929) managed to obtain the highest political post of the German Empire thanks to the support of the royal favourite Prince Philipp, Fürst zu Eulenburg und Hertefeld (1847-1921). For many years, Wilhelm II, German Emperor (1859-1941) thought of Bülow as “his Bismarck.” With the support of his advisor Friedrich von Holstein (1837-1909), Bülow tried to manoeuver the German Empire in between the interests of the other great powers.

Even though Bülow presented himself as the guardian of Bismarck’s heritage, his international policy was capricious and opportunistic. This approach was hardly reconcilable with foreign policy as Otto von Bismarck (1815-1898) had practised it, that is, restricted to long-term European alliances.

The rapid alternation of European power constellations favoured Bülow’s policy, however – especially the antagonism between Great Britain and the Russian Empire. The fruit of Bülow’s international policy was the acquisition of German colonies in China and the Pacific. Bülow supported Admiral Alfred von Tirpitz’s (1849-1930) plan for the construction of a major battle fleet. He saw this as a necessity for Germany’s increasing global trade and for the protection of the new colonies. Bülow also backed the Berlin to Baghdad Railway Project, even though this increased tension with Russia and Great Britain. The Entente Cordiale between Great Britain and France in 1904 was one of the numerous setbacks of foreign policy that followed. In 1905/06, the Entente survived its first baptism of fire and the German Empire appeared increasingly isolated. In terms of domestic policy, Bülow governed with the support of changing majorities in the Reichstag, thus strengthening the parliamentary system, albeit involuntarily. Nonetheless, he did not instigate any serious constitutional reform. The government was still not accountable to the Reichstag. In 1909, after the Daily Telegraph Affair and the Eulenburg Scandal, Wilhelm II lost confidence in him and accepted Bülow’s letter of resignation.

Bülow had already begun to change his mind regarding the feasibility of Weltpolitik in 1908/09 because he was increasingly concerned about the military dangers which this course entailed. Bülow’s star seemed to be on the rise once more when he was appointed special ambassador to Italy in December 1914. His mission was to keep Italy in the Triple Alliance, or at least to prevent Italy from entering the war on the side of the Entente.

In 1886, Bülow had married Maria Beccadelli di Bologna, Countess Camporeale (1848-1929) and stepdaughter of the Italian Prime Minister Marco Minghetti (1818-1886). Since his earlier term as ambassador in Rome (1894-1897), he was well familiar with Italian politics. Bülow’s last political mission failed on 23 May 1915, with the Italian declaration of war on Austria-Hungary. At least the former chancellor had succeeded in delaying Italy’s entry into the war. After Theobald von Bethmann Hollweg (1856-1921) resigned as chancellor in July 1917, Wilhelm II declined to consider Bülow for office once more. Subsequently, Bülow’s many critics attacked him for scheming with “revolutionary elements” in order to gain a position of power in German politics again.

Ullstein published Bülow's Memories (Denkwürdigkeiten) in four volumes after the author’s death in 1930/31. They caused a sensation. Traditional monarchists could not accept how Bülow tried to place the blame for the failures of his policy onto his subordinates by depicting them as unqualified and lacking in character. He also had no inhibitions at exposing the Emperor and his closest friends to ridicule, even though he had once been a court intimate himself. Since this time, arguments have become more convincing that Bülow, in the end, caused the Daily Telegraph Affair by his negligence. In fact, he would also appear to have been the originator of the Eulenburg Scandal. With the specific information he leaked to the journalist Maximilian Harden (1861-1927), he attempted not only to ruin the reputation of competitors for imperial favour, but also to clip the wings of the all-powerful monarch himself. 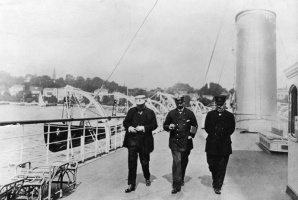