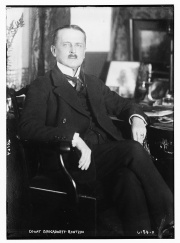 As an imperial diplomat, first Foreign Minister of the Weimar Republic, leader of the German Peace Delegation in Versailles and also first ambassador to the Soviet Union, he acted in decisive positions in pre- and post-war German foreign policy. His person as well as his political conception and activities are appraised controversially in historiography to this day.

Imperial Diplomat in World War I↑

Representing the conservative German social and political elite, Graf Ulrich Carl Christian Brockdorff-Rantzau (1869-1928) appeared also as an unconventional, atypical, and accommodative statesman. As envoy in Copenhagen beginning in 1912, he was involved in peace efforts with Russia which even included initiatives to revolutionize the Russian Empire. During the First World War, he worked to improve relations between Germany and Denmark, and supported Danish neutrality towards Germany.

Brockdorff-Rantzau was appointed State Secretary for Foreign Affairs in early January 1919. His identification with the new political system seemed to have taken place without any appreciable problems. Although showing a certain flexibility in accepting the post-war order in both national and international politics, his appearance and his legendary critical and seemingly arrogant speech during the receipt of the allied peace terms in Versailles on 7 May 1919 provoked a fatal and destructive impression of Germany’s post-war policy toward the allied nations. This was because of his categorical rejection of the so called “war guilt clause”. The counter-proposals offered by the German delegation under his leadership, which aimed for the mitigation of the peace-terms, were unsuccessful. In the absence of negotiations with the Allies, he refused to sign the Versailles “Diktatfrieden” and resigned from office.

His second political engagement came after the signing of the Treaty of Rapallo in April 1922 and the reestablishment of German-(Soviet-)Russian diplomatic relations. As the first German ambassador in Moscow he acted as a counterpart to Chancellor Gustav Stresemann (1878-1929) who preferred a western-oriented “Revisionspolitik”. The political developments in the aftermath of the Locarno Conference and Germany’s admission to the League of Nations turned out to be political burdens for him and provoked a growing pessimism that could only be compensated by forcing the conclusion of the Treaty of Berlin (1926), which established a peaceful relationship with the Soviet Union. Count Brockdorff-Rantzau died while on home-leave in Berlin in 1928.