Following the decisions of the Congress of Berlin in 1878, Austria-Hungary occupied the provinces of Bosnia and Herzegovina. From 1882 onwards, members of all ethnicities in Bosnia-Herzegovina were equally conscripted to military service. Bosnian-Herzegovinian troops, fought on all major fronts where Austro-Hungarian troops were stationed during the First World War, and they became known for their discipline, courage and reliability.

Following the decisions of the Congress of Berlin in 1878, Austria-Hungary occupied the provinces of Bosnia and Herzegovina. Officially, the territories remained under Ottoman rule until their annexation by Austria-Hungary in 1908, but were governed by the Austro-Hungarian Empire. Administrative authorities sought to recruit locals for the Austro-Hungarian army immediately after occupation, and to that end established a military boarding school (“Militärknabenpensionat”) for boys in Sarajevo. Young men were levied for military service from 1882 onwards, not least as a means of “compensation” for all the substantial investments the Empire was making in the provinces.

When World War I broke out, 10,156 men were serving in the four Bosnian-Herzegovinian regiments (plus 21,327 reservists), as well as 434 men in the Feldjägerbataillon (plus 1,208 reservists).[2] This made up roughly 5 percent of the entire troop strength of the kaiserlich und königlich (k.u.k.) army. From 1891 onwards, Bosnian-Herzegovinian units were relocated to different garrisons of the monarchy: first to Vienna and Budapest and later also to Graz, Wiener Neustadt, Trieste and Bruck/Leitha.

Bosnian-Herzegovinian troops fought on all major fronts where Austro-Hungarian troops were stationed during the First World War. However, individual regiments were only occasionally deployed as a whole. Mostly, individual battalions fought separately from their original regiments. One – likely incomplete – list names no less than thirty-seven divisions to which Bosnian-Herzegovinian troops were assigned during the war.

Contrary to some of the authorities’ fears there were no problems with the Bosnian troops' morale at the outbreak of war. The Serbian-Orthodox soldiers often felt that being considered unreliable insulted their soldier’s honor, but overall the Bosnian-Herzegovinian troops proved to be particularly reliable and strong in combat with the minor exception of some isolated incidents.

In September 1915, two additional Bosnian-Herzegovinian Feldjägerbataillons were formed (No. 2 and 3), which were followed in early 1916 by the Feldjägerbataillons No. 4 to 8, and in the autumn, by the Infantry Regiment no. 5. While the Feldjägerbataillons No. 1 to 4 remained until the end of the war, the rest – together with parts of the regiments – were regrouped into new Bosnian-Herzegovinian Infantry Regiments (No. 6-8) in February 1918. This was part of the reorganisation of the k.u.k. army in 1917 and 1918 when the number of battalions was reduced to three per regiment. From October 1917 to March 1918, there was an additional Bosnian-Herzegovinian Infantry Regiment No. 10, which consisted of the remains of the previously established 5th Regiment.

A count results in a peak of about thirty-five battalions, with a fighting strength of about 1,000 men per battalion. However, these numbers fluctuated considerably during the war.

One military operation stands out to this day as an unparalleled example of the courage of the Bosnian-Herzegovinian troops (known as Bosniaks): the storming of Monte Fior of the Melette massif in South Tyrol on 7 June 1916.[3] The operation took place as part of the Battle of Asiago, also known as the Trentino Offensive. By launching a surprise attack through the mountains towards Venice and thereby opening a rear front against the Italian troops on the Isonzo Front, this operation was supposed to force Italy into a peace agreement.

On 7 and 8 June 1916, the attack finally reached an impasse on terrain with only scarce cover at the southern rim of the Asiago basin, in the area around Sette Comuni. The Bosnian-Herzegovinian Infantry Regiment No. 2 was deployed together with the k.u.k. Infantry Regiments No. 11 (Bohemian) and 27 (Styrian) combined in the 11th Infantry Brigade on Monte Fior. These belonged to the 6th Infantry Division under Lieutenant Field Marshal Alois Schönburg-Hartenstein (1858-1944), also a two star general, and respectively, the (Iron) Corps III from Graz, Styria.

In order to open the way to Bassano and move farther into the Venetian plain, the imposing massif of Monte Fior (1,824 meters) had to be conquered. Eventually, after two days of heavy fighting, the “Sturmgruppe”, Battalion III under Lieutenant Colonel Stefan Duić (1877-1934), succeeded in capturing the summit of Monte Fior through close quarter melees and managed to hold it against Italian counterattacks. The fighting continued well into the night.

208 Bosniaks fell during these battles, as well as 1,233 Italian Alpini of the 1st and 5th regiments. The fighting was at times extremely fierce; apparently, during the last hours of the struggle for the summit no prisoners were taken on either side. As many of the officers had fallen or were severely wounded, NCOs often led the attacks. Heroic feats were reported by all the units deployed, in part carried out by young soldiers on their own initiative. It was battles like the one for Monte Fior – and the ensuing decorations of the participating troops – that led to the Bosnian-Herzegovinian Infantry Regiment No. 2 to become known as the “bravest” regiment of the entire k.u.k. army. At any rate, with forty-two Gold Medals for Bravery, it held the highest number of such distinctions in the k.u.k. army. Captain Gojkomir Glogovac (1883-1922), who was awarded the Knights Cross of the Military Order of Maria Theresa in 1917 as a Bosniak officer, was also a member of the Zweier-Bosniaks.

Another significant role played the Bosniaks in the breakthrough at Flitsch-Tolmein/Caporetto in 1917, when 9,000 Bosniaks, corresponding to about a fifth of all Austro-Hungarian troops of the first line, took part in the 12th Battle of the Isonzo. Bosniaks were the first Austro-Hungarian soldiers, crossing over the Tagliamento.

The collapse of the Austro-Hungarian Empire naturally brought about the disbandment of the k.u.k. army and hence the Bosnian-Herzegovinian troops. These went back to their home country, although several thousand Bosniaks saw their return delayed, having been captured as prisoners of war.

Some testimony from these military formations, which lasted for only thirty-five years within the k.u.k. army, has been preserved, especially from the time of the First World War. Thus, a series of smaller monuments can be found in the area of the former Isonzo Front, as well as in the Museum of Military History in Vienna, in the Garrison Church in Graz, and – erected by relatives of the Austrian Federal Army – at the Malga Slapeur on Monte Fior, Melette. The monument at the military cemetery in Log pod Mangartom displays a Bosniak next to a member of the Landwehr Mountain Troops. The largest cemetery for Bosnian-Herzegovinian soldiers abroad is in Lebring, south of Graz, where from 1915 on, in newly erected barracks, the replacement troops of the Bosnian-Herzegovinian Infantry Regiment No. 2 were stationed, along with a prison camp and a military hospital.

Reviewing the Bosnian-Herzegovinian troops in the k.u.k army has gained importance in the past decades in light of the Federation of Bosnia and Herzegovina. Publications and museums, such as the one at the place of the assassination of Franz Ferdinand, Archduke of Austria-Este (1863-1914) in Sarajevo, also shed light on this part of the country’s military history. 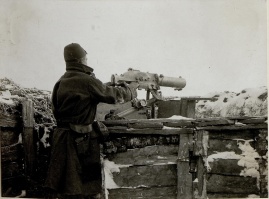 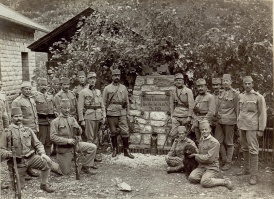 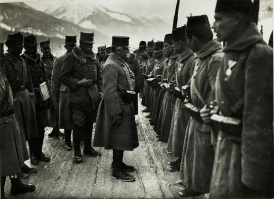