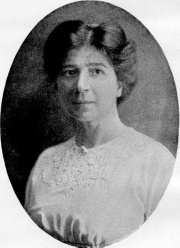 Gertrud Bäumer was one of the most well known leaders of the German women’s movement. In 1914, as the president of the Federation of German Women’s Associations (Bund Deutscher Frauenvereine, BDF), she co-founded the National Women’s Service (Nationaler Frauendienst, NFD). After World War I, she was one of the first professional women politicians for the liberal, German Democratic Party (Deutsche Demokratische Partei, DDP). Dismissed from public service in 1933, she continued to write books and hold lectures all over Germany.

Gertrud Bäumer (1873-1954) was one of the most famous leaders of the German women’s movement. She earned a Ph.D. in German literature in 1905 and was a member of the Progressive People’s Party (Fortschrittliche Volkspartei, FVP), the liberal party founded by Friedrich Naumann (1860-1919). From 1910 onwards, Bäumer was the president of the Federation of German Women’s Associations (BDF), the umbrella organisation of the German women’s movement. In this position Bäumer communicated the concept of the National Women’s Service (NFD) to the German government, in order to underline the willingness of German women to support the nation in the upcoming war. The NFD tried to coordinate the activities of women’s associations all over Imperial Germany beyond the activities of the Red Cross. Women were engaged in the fields of food provision, nutritional advice, cooking classes, welfare work and campaigns for families, women in childbed, babies, widows and orphans. In addition, middle-class women offered training courses for women and teenagers, as well as employment services and legal advice. The NFD’s network efficiently supplemented the public welfare state.

In 1915, Bäumer tried to prevent the participation of German women in the international women’s peace congress in The Hague, which she regarded as an anti-patriotic act. During World War I Bäumer regularly published articles on the home front in the liberal journal Die Hilfe (1894-1944), which was published by Friedrich Naumann. Bäumer’s texts were accompanied by Naumann’s articles on the Front. Together they offered to the reader a type of war diary. From 1916, Bäumer co-edited the feminist monthly Die Frau (published 1893-1944), one of the most successful journals of the German women’s movement.

Professional Reorientation during World War I↑

After 1899, when Bäumer started her partnership with Helene Lange (1848-1930), the former teacher worked as a freelance writer. She moved from Berlin to Hamburg in 1916 to establish and run the Women’s College of Social Work (Soziale Frauenschule) and the Social Pedagogical Institute (Sozialpädagogisches Institut), one of the first colleges that trained female social workers in Germany. She decided to go to Hamburg for this new job because she felt that as a woman she saw no chance of getting a position as a politician or as a scholar at university.

Bäumer predicted an increasing demand for the education of female social workers, since many had started their career as volunteers without any formal training during the war. The city of Hamburg offered Bäumer the opportunity to establish a privately financed model institution (Musteranstalt) for professional women social workers in the fields of youth welfare, youth care, reducing infant mortality and career guidance. The Women’s College of Social Work and the Social Pedagogical Institute were opened in spring 1917 and fostered a close community between teachers, sponsors and students. The first students felt that they were a part of the third generation of women activists in the succession of Lange and Bäumer.

Bäumer’s struggle for the women’s vote ended in 1918 when German women obtained the right to vote, and Bäumer became one of the first professional women politicians in the newly founded DDP. She was a member of the national parliament 1919-1932, and the assistant head of a department in the Ministry of the Interior from 1920 to 1933. In 1919, she joined the League to Combat Antisemitism (Verein zur Abwehr des Antisemitismus), and in 1926 she was a member of the German delegation to the League of Nations.