The Austro-Hungarian automotive industry and the necessary equipment for military vehicles developed very slowly in comparison to other European states. During the First World War, the army had to work hard to build up a motorized unit.

Between 1898 and 1900, individual businessmen in Austria-Hungary turned to the automobile production that was developing across Europe. These early ambitions failed primarily because of two problems, the first being their inability to overcome technological uncertainties and the second, limited domestic demand. Around 1905, the only manufacturers on the market were those who could support automobile construction through other sections of their production process or by a foreign mother enterprise. At that time, there were no more than eight automobile companies, including Lohner, Nesselsdorfer, Austro-Daimler, Leesdorfer, Gräf & Stift and Bock & Hollender. Laurin & Klement as well as Puch also produced motorcycles and motor vehicles beginning in 1905. The producers were located in Austria, Bohemia (Laurin & Klement) and Moravia (Nesselsdorfer). For the early period, only estimates of the numbers of produced cars – 300 in 1905 and 400-500 in 1906 – are available due to a lack of statistics. There are also no available numbers on employees. The production at that time was done more in a workmanlike than industrial way.

Between 1906 and 1908 some local suppliers, such as Austro Fiat, Fross-Büssing, Saurer and Berna-Perl, successfully joined the market, especially in the commercial vehicle segment due to foreign licenses. Another automobile producer (car and truck) – the First Bohemian Moravian engineering factory in Prague, offering its products under the name Praga – appeared on the market. Laurin & Klement bought the Reichenberger automobile factory (RAF) in 1913. In the Hungarian part of the empire, several vehicle manufacturers were established, including MARTA, MAG, Ganz & Danubius and Raba, which predominantly pressed the market with license constructions of vehicles. Together with the survivors of the early phase, the new vehicle manufacturers achieved considerable growth in the years leading up to 1913. The motor industry belonged to the fastest-growing industrial sector in Austria-Hungary. The demand from nationalised institutions such as mail and army was essential for the growth of the home market.

Incorporating Automobiles into the Military↑

Parallel to the development of the local motor vehicle companies, the k.u.k. army purchased and thoroughly used their first heavy truck in 1898, built by Bierenz, Fischer & Cie using Daimler parts. The Department of War (Reichskriegsministerium) procured additional motor vehicles. Another truck was sent to the military supply magazine (Militärverpflegsmagazin) in Vienna after repeated requests by the technological armed forces committee (Technisches Militärkomitee) in 1901. After that, different vehicle types, including motorcycles, were tested completing great manoeuvres. Five Daimler heavy trucks were purchased for military supply magazines in 1903. In this year, the first suggestion was raised to create a voluntary automobile corps (Freiwilliges Automobilkorps), whose members were obliged to take part in military exercises together with their vehicles.

In 1904, the first military truck trailer – also referred to as a mechanical train – was delivered, consisting of an engine car and two spring-less trailers, each with a 1.5-ton payload. The armed forces took over the transportation of mail and passengers on routes without a train connection. As a result, Daimler was entrusted with the production of the first armed forces mail car for Bosnia. Gräf & Stift and Saurer also supplied the armed forces mail lines with vehicles.

First tests with an artillery-towing vehicle were made in 1905. In the following year the Austro-Hungarian army used a Daimler-designed all-wheel-driven armoured car at a manoeuvre with “very favourable success”; nevertheless, it was later sold to France. A year later, positive experiences with all-wheel drive led to the construction of a four-wheel-drive truck that could tow three trailers. In 1907, they looked for a suitable heavy truck for ammunition. In 1908, an artillery-towing vehicle from the Wiener Neustädter Daimler factory was ready for series production, which further generations should follow. In the same year, a gasoline electrical street truck trailer, the so-called territorial reserve train, was constructed. Several two-axle trailers equipped with electrical wheel hub engines were towed by a generator vehicle.

The development of a military automobile organization started in the Habsburg Monarchy in 1909. The creation of the automobile department Klosterneuburg was intended to meet all the army’s requirements in the field. The steady expansion of the k.u.k. army’s fleet created a need for mobile repair shops. After an evaluation journey in fall 1909, a larger number of light two- to three-ton trucks were ordered and delivered by Gräf & Stift, Austro Fiat, Fross-Büssing and Saurer.

Military experts had to figure out how to provide a sufficient number of military trucks without burdening the budget. The solution was the so-called subsidy system, in which the Department of War slowly procured trucks, including trailers, with the help of private businessmen. The first prototypes of trucks and trailers appeared in March 1910 due to the subsidy law of 1908. The owner had to keep the vehicle in faultless condition for five years and it had to be provided to the army administration in case of a need. In 1912-13 the first series of those trucks came up (three- and five-ton). Fross-Büssing, Austro Fiat, Gräf & Stift, Praga/Raba and Saurer produced the three-ton type; Fross-Büssing, Austro Fiat and Saurer manufactured the five-ton type. In 1912, the first large-scale order of cars followed. However, compared to foreign armies, Austria-Hungary’s vehicle formations remained modest.

The Challenges of the War↑

Due to the assumption of a short war, there were initially few material precautions on the vehicle sector even after mobilization. Austria-Hungary hoped to round out the fleet with some trucks from private industry as well as the volunteer automobile corps’ cars. The automobile department Klosterneuburg’s assumption that fuel and lubrication were the only resources needed for repair and supply basis during war quickly turned out to be wrong.

Soon after the beginning of the war, motoring grew to an enormous size. The automobile producers now only worked to meet exploding military vehicle needs. They were forced to create a motorized unit under war conditions, focusing on procurement, supplies, repair in field and at home, and the operation of automobile convoys. According to the War Requirements Act (Kriegsleistungsgesetz), the automobile factories were put under military supervision, rubber stocks and operating supplies were confiscated and limited raw materials – which were frequently exchanged for substitute substances – were managed strictly.

The motorization of guns and heavy goods in peacetime had already gained increasing importance but grew even further during World War I with the use of larger calibre guns. The intention to replace animal truck trailers with a more efficient means of transportation was a prerequisite for quick further development of automotive street trains.

The demand caused a clear growth of the motor vehicle industry. However, it was viewed as an “unhealthy” growth, because it was more than doubtful whether the new industrial capacities would find appropriate markets after the war. The proportionally low motorization of the k.u.k. army has to be understood in this context, as the manufacturers refused to further expand their capacities as the war dragged on, despite the state’s offer of financial support. A progressive lack of food towards the end of war did damage as well. Increasing shortage of material and operating supplies also caused production restrictions in the automotive sector. 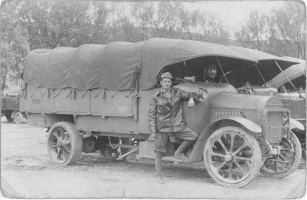 Puch truck of the Austro-Hungarian Army