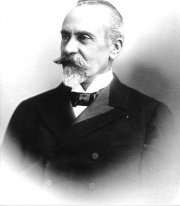 Ador was the third president of the International Committee of the Red Cross (ICRC) and a Swiss minister during WWI. He displayed the charisma, the diplomatic skills and the decisiveness necessary to give the ICRC a crucial role in the protection of prisoners of war during the war, and afterwards, to secure the institution’s survival and his country not being considered as an ally of the Axis powers.

He was born into a wealthy family of Geneva and was involved in the activities favored by his milieu. Predictably, he became a lawyer and engaged in politics of his hometown. There, he soon played an important role, as a prominent figure of the so-called "Independents", the local right-wing Party. In 1874, he became a member of the cantonal parliament and was regularly re-elected up to 1915. There, he notably advocated the separation of church and state to ease the relations between Catholics and Protestants after the Kulturkampf (1907). From 1885 up to 1897, he was also offered a seat in the State Council (the canton's executive). Although several opponents considered his financial policy excessively liberal, his actions were mostly praised. As a matter of fact, he decisively contributed to the introduction of the system of proportional voting in Geneva in 1892, not least because of his party's status in the political arena: although it was supported by the richest and most influential families, it had remained a minority party, whereas the "Radicals" formed the majority.

This political cleavage between radicals and conservatives was even more pronounced on the federal level, where the former had been dominating ever since 1848. This also partly explains why Ador was (at least in the beginning) far less successful in Berne than in his hometown: he knew he lacked the indispensable support and thus repeatedly refused to become a candidate for the "Federal Council", i.e. the Swiss federal Government. Moreover, his "flamboyance" was not appreciated in Switzerland. In 1902, he therefore preferred to resign from the National Council, the Lower House – which he had chaired just one year before! – than to refuse the Cordon of Grand Officer of the Legion of Honour that he was awarded by the French authorities because of his commitment to the Universal Exhibition of Paris in 1900. Ador was aware that the Swiss Constitution prohibited members of parliament to receive foreign distinctions. However, he reckoned that it was preferable to quit the federal parliament than to jeopardize his international reputation and relations.

Not only did he truly appreciate the republican decorum, he also felt important affinities with France and needed his Parisian connections for his humanitarian activities. Like several other men of his milieu, Ador had entered the International Committee of the Red Cross (ICRC) in 1870. Despite its name, the Committee was composed solely of members of the Geneva grand bourgeoisie. Its president was Ador's uncle Gustave Moynier (1826-1910), who had supervised his joining the humanitarian institution. Soon, Ador became its secretary; in 1888 he was appointed vice president and, finally, in 1910, president. The pre-WWI ICRC was a small organization of a dozen of people that merely aimed to disseminate news concerning the Red Cross Movement and coordinate the activities of the several National Societies of the Red Cross.

In 1914, things changed dramatically. The war was a general conflict. Consequently, most of the rules and conventions the ICRC was supposed to follow were not really adopted. Thus, Ador boldly decided to readjust the institution's policy. First, he intensified its traditional tasks by tirelessly disseminating the existing rules of International Humanitarian Law and visiting more than 500 prisoner of war camps. He also supported the creation of an agency specifically dedicated to prisoners of war. As of August 1914, the "Agence internationale des Prisonniers de Guerre" (AIPG), gathering thousands of employees and volunteers, worked to help prisoners of war, by facilitating contact with their families and sending them tons of parcels. Second, he initiated or supported humanitarian initiatives that were either completely new or even in conflict with the ICRC's original mandate. Ador thus agreed to the creation of a section in the AIPG meant to help civilians trapped by the war. As of November 1914, he also suggested that the Swiss government facilitate the transfer and exchange of severely wounded soldiers. In 1915, Ador officially protested against the massacres of Armenians despite the institution's law of silence. In short, because of Ador's personal impact the efforts of the ICRC were mostly focused on categories of victims and victimhood that it legally had no mandate to care for and that were mainly considered Entente-oriented.

In contrast to Ador, the majority of Swiss politicians and the Federal Council were clearly Germanophiles. There was a dramatic internal divide between the French and German speaking parts of the country. The international situation did not help either, as the Entente regularly took retaliatory measures that prompted German counter-retaliation – so that the situation turned, more often than not, into a counterproductive vicious circle. In June 1917, a resounding national and international scandal broke out, as a most compromising case of espionage was uncovered: several weeks before, the very conservative Minister of Foreign Affairs, Arthur Hoffmann (1857-1927), and the socialist Member of Parliament Robert Grimm (1881-1958) had worked together in order to facilitate a separate peace between Berlin and Petrograd. Their attempt was rightly seen as a serious pro-German breach of neutrality. Hoffmann was forced to resign on 19 June 1917.

This was the context in which Gustave Ador was finally elected to the Federal Council. This solution was considered – and probably was – the best thing to do as, indeed, he combined several strong assets. From a domestic perspective, his election was likely to prove that the French speaking part of Switzerland indeed mattered. From an international viewpoint, it was supposed to prove, against all odds, that Switzerland belonged to the Entente's circle. More generally, he showed both the world and the Swiss that the country's neutrality was no mere cowardice but a true humanitarian opportunity.

The bet was won – not without difficulty, however. Progressively, Switzerland ceased to be considered one of Germany's allies. Their humanitarian action was praised globally and the ICRC was awarded the Nobel Prize in December 1917. Although the Swiss were not allowed to participate in the peace negotiations at Versailles, Ador's diplomatic skills ensured his hometown and homeland an international position far beyond their actual importance. First, he had his share in Geneva's becoming the seat of the League of Nations. Second, he negotiated Switzerland's entering in the League of Nations, despite its neutrality and unwillingness to participate in military sanctions.

He himself managed to play a not unimportant role in the new European and World order: after having resigned from the Federal Council, he became the President of the International Financial Conference of Brussels (1920) and officially represented Switzerland in the League of Nations between 1920 and 1925. Most importantly, he resumed his position at the head of the ICRC until his death in 1928.

Despite his being a member of the Swiss government only for two and a half years, Ador was one of the most prominent and decisive Swiss ministers – not least due to his powerful international network and his taste for pomp, and, more generally, all the qualities that meant that he was hardly considered to be a true Swiss. 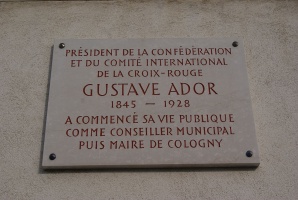