The Volksbund Deutsche Kriegsgräberfürsorge e.V. (German War Graves Commission or VDK) was established after the First World War to protect German war graves. During the Weimar Republic it developed into a powerful organization with a large membership. Shaped primarily by the educated middle class, it pursued socially conservative goals and strove to promote national solidarity through shared commemoration of the war dead. In 1933 the VDK performed a voluntary Gleichschaltung and quickly collaborated with the new National Socialist regime.

All First World War belligerents faced the challenge of how to cope with the conflict’s monstrous tally of death. This challenge included investing the dead with political and cultural meaning, as well as physically maintaining hundreds of thousands of soldiers’ graves. In the era of nationalism, the accepted practice was to commemorate all of the fallen and not merely aristocratic officers, as had been the case in earlier epochs.[1] Since the military was perceived as representing the nation, a common burial site for all ranks became the norm and also served to symbolize the shared war effort.

The Treaty of Versailles guaranteed the inviolability of German war graves, but due to the dissolution of the military apparatus and the sheer number of dead, whose burial places were mostly outside Germany (in France alone nearly 840,000 German soldiers were interred), the Weimar Republic could not cope with their maintenance and care. Against this background the VDK was founded on December 16, 1919 as a citizens’ initiative intended to assist the state. The association’s founding father was Siegfried Emmo Eulen (1890-1945), who was born into a bourgeois family and was a war volunteer in WWI.

After its establishment the association grew swiftly, its membership increased from 46,000 in 1922 to nearly 150,000 at the beginning of 1933. Its financial development was favorable. The organization received income from membership fees, donations from street collections and sponsorships for the care of graves. Yet while the VDK saw itself as representing all Germans, it was mainly guided by its middle class perspective and had hardly any members from the working class.

The organization’s activities concentrated on two areas: to support families of fallen soldiers, for example helping them to discover where their relatives were buried, and, starting in the mid-1920s, by taking over responsibility for maintaining graves and building new military cemeteries. Moreover, the VDK used its magazine “Kriegsgräberfürsorge” as a powerful public relations vehicle and also promoted highly symbolic initiatives such as the popular “Volkstrauertag” (Day of Mourning), which was commemorated nationwide after 1925. For judicial reasons it could not be made an official holiday but nevertheless created a unifying framework for secular remembrance.[2]

The VDK saw itself in the tradition of the “ideas of 1914” and rigorously rejected liberal western democracy. It pursued an ultra-conservative ideology and maintained a reactionary stance, which led the VDK to exploit soldiers’ graves to achieve specific political aims. Though the organization did unquestionably help lots of bereaved relatives with its work, the care of graves was not seen primarily as serving a humanitarian purpose. Instead, it was undertaken as a propaganda vehicle for a nationalistic antidemocratic ideology. Individual graves were leveled in terms of cemetery design in order to create an aesthetic homogenization of the war graves. While name plates continued to exist, personal identity was thus annihilated and the casualties of war rendered anonymous in order to block out the specter of violent death and exalt the common goal of fighting for the fatherland. Hence the VDK judged the war positively, interpreting the “heroic deaths” of German combatants as expressing the ideal of self-sacrifice among an elite “band of front-line soldiers”.

Until the early 1930s, the association refrained from openly criticizing the Weimar Republic, as it was dependent on state support. Nevertheless, it ideologically sided with the völkisch movement. In 1933 it quickly assimilated itself within the National Socialist state, e.g. by voluntarily adopting a new centralized structure based on the Führerprinzip. As a result of the association’s subsequent exploitation by the National Socialist hero cult, membership rose to nearly 300,000 in 1936. After the Second World War its outlook changed, becoming liberal and democratic. For the VDK, war graves henceforth symbolized the suffering of all victims and the importance of peace and international understanding. 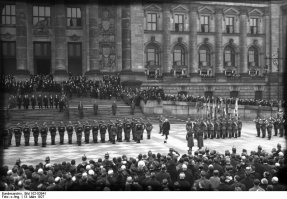 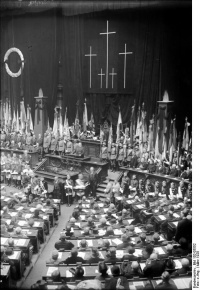