The focus on the First World War in public discourse did not necessarily translate into more financial assistance for veterans in Weimar Germany. Therefore, veterans’ associations were united in the claim that the state was not doing enough for former soldiers and their families. The different organisations offered space for the war memories of their members; they put forward interpretations of the war’s legacy and tried to secure financial support and welfare provisions for their members. Commemorative practices, including remembrance ceremonies for the fallen of the war as well as gathering support for the construction of local memorials, belonged to their key activities.

However, veteran organisations that represented the interests of particular groups of war-injured sometimes competed with each other for access to scarce financial resources. It is important to remember that organisations representing injured or disabled war veterans had high membership rates in Weimar Germany. For example, the Reichsbund der Kriegsbeschädigten, Kriegsteilnehmer und Kriegshinterbliebenen (Reich League of Disabled War Veterans, Ex-Servicemen, and War Dependents) had 830,000 members in 1922. The assumption that former soldiers joined veterans’ associations because they wanted to continue fighting or looked forward to a future war is a gross misunderstanding of the motivations of many. Founded in 1900, the Kyffhäuserbund — the umbrella organization of a number of local veterans’ organizations — was one of the oldest veterans’ associations in the Weimar years. The Kyffhäuserbund was conservative but largely apolitical; most of its members were primarily interested in the sociable activities of the association. The Kyffhäuserbund referred back to the mythology of the medieval Emperor Frederick II, Holy Roman Emperor (1194–1250), who, it was thought, would return as a saviour of the Reich. By 1929, the association reached its peak in the Weimar Republic with 2.6 million members.

New Veterans’ Associations after the End of the First World War↑

A number of veterans’ associations were founded shortly after the First World War. The Reichsbund jüdischer Frontsoldaten (Reich League of Jewish Front-Line Soldiers) was one of them, eventually reaching a membership of 36,000. The association’s aim was to serve as a defense league for Jewish veterans and to act against signs of anti-Semitism. Some of the newly-founded post-1918 veterans’ associations were deeply divided on political grounds, ranging from the national conservative right to the extreme left and, therefore, played an important role in Weimar Germany’s political culture. These veterans’ associations drew different conclusions from the war; some fiercely argued for, and others against, Weimar democracy, using the First World War as reference point. For most of them a focus on mainly sociable and apolitical activities was not seen as an option. The nationalist veterans’ association Stahlhelm (Steel Helmet-League of Front Soldiers), founded in December 1918, made no effort to disguise its anti-republican attitude. They loudly attacked the Weimar Republic which, in the eyes of the Stahlhelm, was a betrayal for all those who had fought in the First World War. This nationalist veterans’ association combined commemorative activities with a clear political message against republican democracy. At its peak in 1932, the Stahlhelm had approximately 350,000 members. While its commemorative activities did not differ from other veterans’ associations, the clear political statements against the new Weimar state brought the Stahlhelm into direct confrontation with republican veteran organisations. Founded in 1924, the Reichsbanner Schwarz-rot-gold (Reichsbanner Black-Red-Gold) was open to all male republicans and stressed its role as a republican war veterans’ association supporting Weimar democracy. With approximately 1 million members, the Reichsbanner was the biggest veteran association in Weimar Germany. While the organisation stressed its openness to all republican ex-servicemen, it was mainly dominated by Social Democrats. The Reichsbanner wanted to make space for the war memories of its mostly working-class members and made clear that nationalist organisations should not monopolize commemoration activities. The Reichsbanner’s rhetoric emphasised the republicans who died in the war, and it viewed the republican state as the only positive outcome of the war.

Legacies of the First World War in the Weimar Republic↑

War memories in the Weimar years divided more than united German society. Large veterans’ associations found it difficult to speak with a united voice, apart from asking for more attention and money for their members. One remarkable exception was the agreement of the country’s four major organisations, including the Reichsbanner, the Stahlhelm, the Kyffhäuserbund, and the Reichsbund jüdischer Frontsoldaten, on a national monument to those who died during the war. While this national monument never materialised in the Weimar years, the four big veterans’ associations had at least agreed on the monument’s location in Bad Berka, close to the city of Weimar. Local commemorative practices did not reflect this agreement but remained divided. By and large, each veterans’ association remembered its own dead. 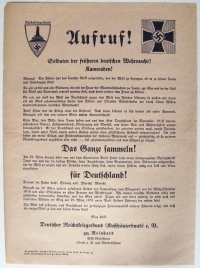 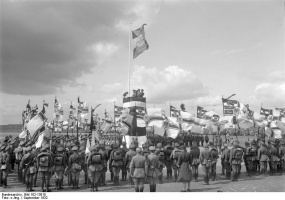 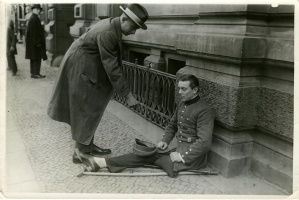 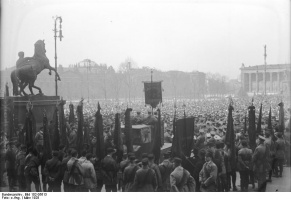 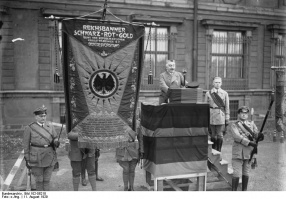 Reichsbanner Schwarz-rot-gold rally in celebration of the Weimar Constitution, 11 August 1929 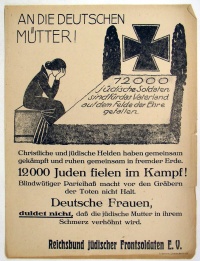 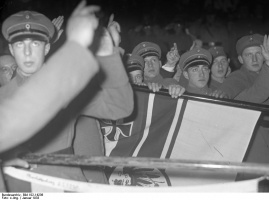 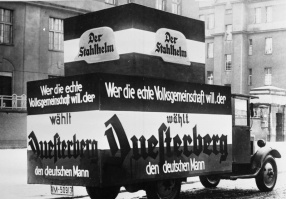