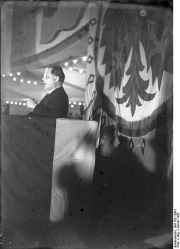 Fritz von Unruh was a German cavalry officer and a pacifist writer who, in his writings, tried to reflect the experience of the First World War, but served instead to transform it into modern literature.

Fritz von Unruh (1885-1970) is surely not the most renowned German First World War novelist. Opfergang (The Way of Sacrifice) was republished in 2014 in France,[1] and his works have not been reprinted in Germany, where he remains largely forgotten. It was quite a different story in the immediate postwar period; Unruh was then a famous expressionist playwright. As a former cavalry officer, he astonished his readership with an emotional and pacifist novel. Although the book was not a best-seller like that of his contemporary Erich Maria Remarque (1898-1970), it was one of the first successes of pacifist literature with approximately 30,000 copies sold.

The First World War is essential when considering Unruh’s life and literary work, yet he confused the issues when it came to this seminal experience. Unruh used all literary genres to narrate the war: speeches, poetry, plays, novels, short stories and essays. He addressed the subject very early, already writing his first texts in August-September 1914. The Great War remained a topic of his works at least until the mid-1930s.

Unruh was born into a noble family. Both his father and grandfather were generals. He studied at the prestigious Kadett Academy in Plön with the sons of Wilhelm II, German Emperor (1859-1941). He graduated as a second lieutenant in a cavalry regiment. But he soon preferred the pen to the sword and resigned from the army in 1912. He then began a successful career as a playwright. Max Reinhardt (1873-1943) staged some of his plays at the renowned Deutsches Theater.

When the war broke out, Unruh volunteered and was sent to the Western Front with the 6th Uhlan Regiment. On the night of the 26 August he was hit by a bullet and fell from his horse. Unruh claimed after the war that he became a pacifist following this injury.

The Slow Conversion to Pacifism↑

The reality is nonetheless far more complex than this reconstruction. After a short convalescence in Trier, Unruh was appointed aide-de-camp at the General Staff of the XVIII Army Corps under the command of Dedo von Schenck (1853-1918). In the chateaus where the General Staff were hosted, including Coucy-les-Eppes, Caulaincourt and Roye, he wrote many letters, patriotic poems and plays. In December 1914 in Moyencourt (Somme), he finished Vor der Entscheidung (Before the Decision), a long dramatic poem, and his first major work on the war. Since the text was censored in 1915, Unruh partly rewrote it before its publication in 1919 and presented it as a pacifist literary manifest. But it appears that the rather patriotic text was probably not censored because of its political content but due to its abstruse form. In the spring of 1916, Unruh was tasked by the High Command to write an account of the ongoing Battle of Verdun. But in spite of a propagandistic narration he wrote an avant-gardist novel in which the influence of the expressionist theatre is noticeable. Despite its patriotic tone, it was censored. In 1916 and 1917, Unruh was awarded with the 1st Class Iron Cross and made captain, and he finally published the novel in 1919 under the title Opfergang, although not without cutting the patriotic parts. Also during the Battle of Verdun he wrote the play Ein Geschlecht (A Generation) that was also censored but was allowed to be presented on stage in Frankfurt in 1917 and published in 1918 thanks to one of his protectors Ernest-Louis, Grand Duke of Hesse (1868-1937).

Unruh’s turn to pacifism occurred at the earliest at the end of 1916[2] but most probably in 1918 or even after the January 1919 repression of the revolution.[3] After the war Unruh, with some success, forged his own legend and depicted himself as an early and prophetic war critic. Opfergang was therefore the first German war novel translated into French in 1923 (and into English in 1928), and Unruh was invited to Paris, were he met Henri Barbusse (1873-1935), Georges Duhamel (1884-1966) and other famous French pacifist war writers. In the 1930s, Unruh was an opponent of National Socialism, was censored and forced to emigrate. He returned to Germany after the war and was one of the first intellectuals, in a 1948 speech, to discuss the collective moral guilt of the German people during the Second World War.