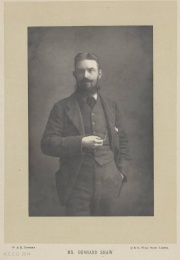 An Irish-born writer and critic, best known as a playwright, George Bernard Shaw was an ardent opponent to World War I. Already in his fifties at the start of the war, Shaw was outspoken in his antiwar speeches and also published a pamphlet entitled Common Sense about the War which greatly altered the public’s opinions of Shaw during and after the war.

George Bernard Shaw (1856-1950) is considered one of the most influential and important playwrights of the 20th century. Shaw settled in London in his early twenties and became a journalist as well as an active member of the Fabian Society, a socialist group that sought to establish a social state in Great Britain through a gradual process instead of revolution. The Fabians went on to establish the London School of Economics in 1895. Shaw’s plays began to be performed regularly in the 1890s and, by the outbreak of World War I, Shaw had become an established playwright with the successes of Fanny’s First Play (1911) and Pygmalion (1912). Shaw was a social activist who championed issues such as socialism, vegetarianism, and eugenics before the outbreak of the war on the European continent.

Shaw and the War↑

Despite significant public support of the conflict, Shaw vehemently opposed the war from the start. Most notably, in 1914 Shaw wrote a lengthy pamphlet that appeared in a New Statesman supplement entitled Common Sense about the War in which he chastised the British and their allies as equally responsible for the war with Germany. He championed socialism as a solution to peace while blaming capitalism for problems on the European continent. During the war, Shaw publically opposed the execution of Roger Casement (1864-1916). Casement was a British diplomat who had tried to gain German arms and support for the Irish Easter Rising. Casement was captured in April 1916 and during a four-day trial was subject to interrogation for his alleged homosexuality. After this brief trial, Casement was found guilty of treason and hanged in August 1916. Shortly after the war, Shaw published the play Heartbreak House (1919), which further indicted British and European society for drifting towards the disaster of World War I. Heartbreak House, influenced by Shaw’s appreciation of Anton Chekhov’s (1860-1904) work, is set during a dinner party on the eve of World War I. The play functions as an allegory for the oblivious British social classes heading towards the tragedy of the Great War. Shaw mixes farce and drama to forge a play in which his characters’ appearances are revealed to be illusions by the conclusion of the final scene. Shaw remained well known as an outspoken critic of the war in addition to his contributions to drama.

After the war, Shaw’s popularity was waning. However, in 1923 Shaw published Saint Joan based on the life and trial of Joan d'Arc (1412-1431). The play was well received and in 1925 Shaw received the Nobel Prize in Literature. Shaw’s popularity continued to grow when Pygmalion was turned into a film in 1938. Shaw and the other writers of the screenplay were awarded the Academy Award for Writing. The film would go on to be adapted into the musical My Fair Lady which debuted in 1954 and the later film of the same name released in 1964. By the time of Shaw’s death in 1950 at the age of ninety-four he had written more than sixty plays, several novels, numerous short stories and dozens of essays.