During the first half of the war, many German cities tried to solve local food supply problems by introducing public kitchens. Subsequently, all German municipalities were requested to implement public feeding institutions due to the intensified food shortages. However, the majority of suffering people rejected the unpopular municipal-sponsored kitchens.

After the beginning of the war, Germany’s largest cities such as Berlin, Hamburg, Cologne, Munich, and Frankfurt improvised different food supply measures due to food shortage and growing hardship on the home front. Supported by private charitable associations as well as church organizations, these cities responded autonomously to the increasing demand for food by setting up public kitchens. These public kitchens usually served needy people, particularly soldier’s wives and their families, as well as the unemployed, who were required to prove their indigence.

Nationwide Implementation of Public Kitchens in 1916↑

Because of persistent food supply shortages due to the Allied sea blockade, local as well as state administrations were forced to find appropriate means to stretch and save available foodstuffs. In early 1916, German state authorities came to the conclusion that the mass feeding institution could provide a comprehensive approach to tackling the changes wrought by the war economy as well as the food supply crisis. Public feeding institutions were seen as an important measure not only to feed large parts of the population but also to simplify women’s and families’ everyday wartime routine. Henceforth, the public kitchen was no longer a charitable institution but an integral part of Germany’s wartime nutrition system.[1]

In April 1916, Prussian cities received a governmental order to expand their public feeding facilities and set up different mass feeding systems thereafter. Half a year later, the War Food Office began to vigorously promote the implementation of public feeding institutions in all German municipalities. Some cities like Hamburg and Dresden had already created a well-working system of public kitchens during the first month of the war. Other cities like Berlin needed to reorganize their entire systems. Henceforth, all efforts in the field of mass feeding aimed to provide food for all residents, regardless of their economic status.

According to a survey by the War Food Office, in October 1916, 1,457 kitchens and distribution centers were in operation in 357 German municipalities with more than 10,000 inhabitants.[2] Towards the end of the war, statistics from the German Food Office counted almost 3,000 kitchens in about 500 municipalities. In nearly every location the kitchens’ capacities had increased at higher rates than their utilization.

The largest meal program in the nation was created in Berlin.[3] Its ten central kitchens could feed more than 20 percent of the population of 2 million on a daily basis, but in fact not even 10 percent of Berliners used the municipal meals. Almost all cities and municipalities did not achieve the common goal to nourish large parts of the population. In some places like Hamburg, Düsseldorf, and Essen, the demand for public meals was much higher than in others. This was particularly the case when cities continued and optimized their early war kitchen systems.

Despite regional differences, in general people’s participation in the public kitchens was a reflection of the severity of the food supply crisis. Nationwide, the highest rates of participation were recorded during and after the harsh “Turnip Winter” from February to July 1917. Alongside single male workers, the elderly, and needy people, the largest group of users were middle and working class women, who had to manage their family’s everyday life.

The organization and design of public kitchens, including accessibility, easy use, demand for meal passes, and the quality of meals, were crucial for the identity-forming effects on meal hall participants as well as the acceptance of public feeding. In spite of their hardship, the vast majority of women refused to use public kitchens. Despite all efforts by officials and organizers to change the long-standing negative image of mass feeding institutions, prejudices towards public meals and stigmatization of the kitchens’ clients remained strong. While middle class women in particular wanted to preserve their pride by staying away from these public facilities, a large number of women criticized the quality of the public meals and the organization of mass feeding. With accusations of dilettantism and food waste, these women stressed their own cooking skills as well as their preference for the private family meal. This latter claim was evidenced by the fact that most attendees picked up their meals for consumption at home.

Finally, municipal public feeding activities depended on Germany’s food supply policy. Due to the state’s failure to manage equitable food distribution, most of the efforts around municipally-sponsored kitchens were not able to reach many potential users. Nevertheless, millions of suffering German city dwellers made use of their local meal halls. After the end of the war, public kitchens remained a makeshift solution in many German cities until the end of the ongoing food supply crisis in the early 1920s. 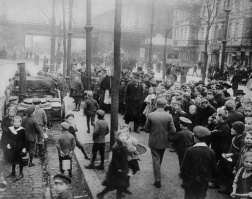 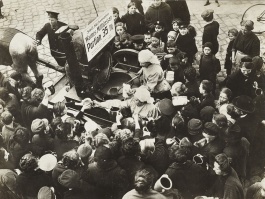