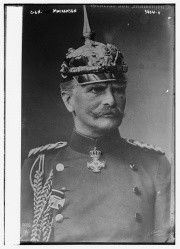 August von Mackensen was one of the most famous and successful German commanders during the First World War. He was engaged on the Eastern Front and campaigned in Russian Poland, Serbia and Romania.

August von Mackensen (1849-1945), son of an estate manager, joined the Prussian Leib-Husaren Regiment Nr. 2 as a one-year volunteer in 1869 and took part in the Franco-Prussian War. After an interlude at the University of Halle, Mackensen reentered the army as second lieutenant in 1873 and began an astonishing career. After a brief spell as adjutant of Alfred von Schlieffen (1833-1913), he was patronized by Wilhelm II, German Emperor (1859-1941). Mackensen served as his aide-de-camp from 1898 until 1901 and was ennobled in 1899.

Beginning in 1908, Mackensen commanded the XVII Army Corps, part of the 8th Army, that fought the battles of Gumbinnen and Tannenberg in August 1914. This was followed initially by operations in Russian Poland (in which his corps answered to the 9th Army), including the seizures of Łodz and Przemysl. As commander of the newly formed 11th Army, Mackensen won the battle near Gorlice-Tarnów on 2 May 1915 and recaptured Lwow on 22 June 1915. On 6 May 1916, the Army Group “Mackensen”, consisting of German, Austro-Hungarian, Bulgarian and Ottoman units, opened the successful campaign against Serbia, forcing the Allied troops back to Saloniki. Following the conquest of Romania and the fall of Bucharest on 6 December 1916, Mackensen was appointed high commander of the occupation army, holding the position until this Armistice.

During the Weimar Republic years, Mackensen used his lasting popularity as “never-defeated army leader”[1] to campaign for the monarchy and served as Wilhelm II’s representative on military and commemorative events. Wearing the uniform of the Leibhusaren with the Death’s Head busby and innumerous medals, the old general field marshal became a perfect instrument of Nazi propaganda after 1933. He lived to witness the terminal catastrophe of the German Reich and was himself compelled to flee the Red Army. 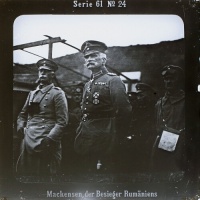