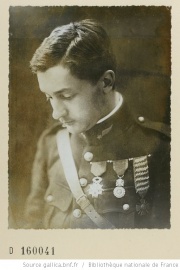 Georges Guynemer was a French fighter pilot. During World War I, he was known for his dangerous but effective fighting style. After his death, he became an aviation legend.

Georges Guynemer (1894-1917) was born in Paris on 24 December 1894. When World War I broke out, he wanted to serve in the infantry. After twice being rejected because he was deemed too puny, Guynemer was finally accepted as a trainee mechanic. Two months later, he entered a flying school and, in June 1915, he was assigned to the MS 3[1] squadron as a corporal pilot. He was led by Jules Védrines (1881-1919), the famous French aviation pioneer, and celebrated his first victory with his gunner, Charles Guerder, on 25 July 1915.

After two special missions, he had to wait for December to win new victories with his plane, “Le Vieux Charles” (The old Charles). He got his first double on 3 February 1916 and officially became a flying ace. His fighting style was risk-taking and dangerous, and he was known for attacking several enemies by himself. Although he was deemed a good pilot and very good shooter, he frequently returned from missions with a badly damaged plane. In total, Guynemer was shot down eight times. Promoted captain on February 1917, he achieved fame through exploits such as shooting down two enemy planes with only five bullets, a so-called “twice”, on 16 March 1917. His most famous feat occurred on 25 May 1917, when he shot down four aircraft in one day.

Guynemer was affected by the loss of several friends, and became increasingly reclusive and exhausted. He refused a post in the rear front and was eventually reported missing in action over Poelcapelle in Belgium on 11 September 1917. He had won fifty-three official victories. His body and plane were never found. After his death, he became an aviation legend. 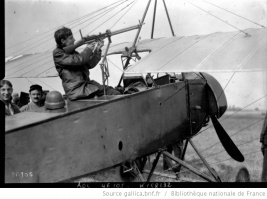 Georges Guymer in one of his planes 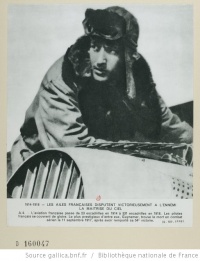