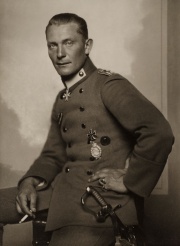 Hermann Göring was a highly decorated and well-known fighter pilot of the First World War and later a high-ranking National Socialist leader.

Hermann Göring (1893-1946) started his military career as student at the cadet school in Karlsruhe and was promoted to the Prussian main cadet school in Groß-Lichterfelde near Berlin in 1909. Two years later, he graduated with honors and received his commission as 2nd lieutenant in June 1912.

Göring first saw action in Mulhouse/Alsace, where he served as battalion adjutant in the regimental staff of the 4th Baden Infantry Regiment Nr. 112 “Prinz Wilhelm”. After the first battles with French troops, for which he was awarded the Iron Cross 2st Class, he was taken to a military hospital in Freiburg for his rheumatoid arthritis. While in Freiburg, his friend Bruno Loerzer (1891-1960), who had taken part in pilot training, left Göring enthusiastic about becoming a pilot. Although his application for a transfer to the Imperial German Army Air Service was rejected, he managed to enlist as an air observer and took part in reconnaissance missions targeting among other things the fortifications of Verdun, for which he was decorated with the Iron Cross 1st Class in March 1915. Finally, between June and September 1915 Göring received his pilot training in Freiburg.

Following service at “Feldfliegerabteilungen” 203 and 25 where he obtained his pilot's badge in October 1915, Göring was transferred to “Kampfstaffel Metz” in September 1916 and later to “Jagdstaffel 7”. In November 1916, while Göring was a member of “Jagdstaffel 5”, he was heavily injured in a dogfight. After his recovery, he was transferred to “Jagdstaffel 26” in mid-February 1917, but spent the next weeks again in a military hospital suffering from tonsillitis. In May that year, Göring became Commander of “Jagdstaffel 27” and in August was promoted to 1st lieutenant. In summer 1918, he was awarded Imperial Germany’s highest military honour, the “Pour le Mérite” for aerial victories and gallantry in action.

By mid-June he reached his 22nd air combat victory. More important than these honors and successes was his appointment as commander of the famous fighter wing “Freiherr von Richthofen” named after the “Red Baron”, Manfred von Richthofen (1892-1918), on 6 June 1918, by which joining the ranks of the most notable flying aces of the First World War. In April that year, the “Red Baron” was killed in combat and his successor, Wilhelm Reinhard (1891-1918), was also killed a few weeks later. After the Armistice of Compiègne the fighter wing was disbanded and Göring was released from the army in the rank of a captain. Göring saw many battlefields of the Western Front including the Vosges and Lorraine in 1915, Verdun and the Somme in 1916, Arras and Flanders in 1917 and the area between Marne, Oise and Ainse in 1918.

Back in Munich in winter 1918/19 and deeply convinced of the “stab-in-the-back” myth, Göring possibly got in contact Franz Xaver Ritter von Epp (1868-1947). But instead of joining the counter-revolutionary troops of this Freikorps leader, he went to Copenhagen in early 1919 as a sales representative of Fokker-Flugzeugwerke. Göring earned his living first in Denmark and later in Sweden with acrobatic flying and as sales man for automatic parachutes before he was employed as a pilot for the Swedish airline Svensk Lufttrafik. In Sweden he met his wife, Carin von Kantzow (1888-1931), née Baroness von Fock.

In summer 1921, Göring returned to Germany and began to study political sciences in Munich, in autumn 1922, he met Adolf Hitler (1889-1945) and joined the NSDAP. Early 1923, he became leader of the National Socialist “Sturmabteilung” (SA), because Hitler wanted to benefit from the fame of the highly decorated flying ace for the recruitment of new members for the “brownshirts”. In the same year, some short autobiographical wartime memoirs of Göring were published in the edited volume “In der Luft unbesiegt. Erlebnisse im Weltkrieg erzählt von Luftkämpfern”. As a member of the NSDAP, he was elected to parliament in 1928 and became president of the Reichstag in August 1932. Holding numerous high political offices at the same time during the Third Reich, Göring was one of the most powerful men beside Adolf Hitler. After the Second World War, Göring was the most prominent representative of the National Socialist state on trial at Nuremberg. He was sentenced to death as a war criminal but committed suicide before he was to be hanged. 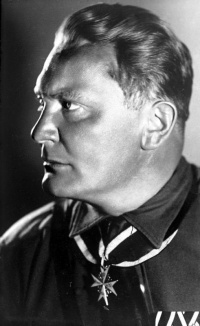 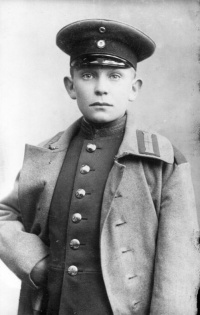 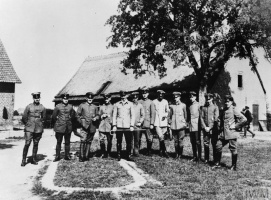 Pilots of the Jagdstaffel 27