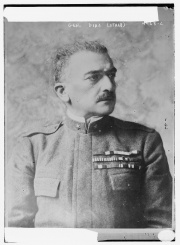 Armando Diaz was an Italian officer and a general during World War I. In 1917, after the defeat of Caporetto, he replaced Luigi Cadorna as chief of general staff of the Italian army. He reformed the army and laid the foundation for the final victory at Vittorio Veneto.

An Italian of Spanish descent, Armando Diaz (1861-1928) started his military career very early. After attending the military school at Nunziatella, he became an artillery officer at the military academy in Turin in 1884. His first active service was during the war against Turkey in 1911, where he served as a lieutenant colonel and infantry commander in Libya. Promoted to major general in 1914, he was assigned to Luigi Cadorna’s (1850-1928) staff when Italy joined World War I.

In 1916, he asked to serve in a combatant unit and was promoted to lieutenant general and commander of the 49th Division in the 3rd Army at the Isonzo Front. After being wounded in service, he received a silver medal for his valuable military contributions.

From Defeat to Victory↑

After the defeat at Caporetto, Diaz replaced Cadorna as general chief of staff. Younger than his predecessor, Diaz belonged to a new generation of World War I generals, able to deal with politicians and capable of bold reforms. An important improvement was made in the organization of the line of command. Diaz was not afraid to decentralize responsibilities and at the same time he reorganized the peripheral commands, giving specific and clear assignments. He worked hard together with Pietro Badoglio (1871-1956) to improve the quality of training and weaponry for the soldiers.

The most radical measures concerned the soldiers’ quality of life. He shortened the periods at the front and reorganized the periodic leaves, with specific attention to the needs of the peasants. The food supply was improved in quantity and quality and the rear lines provided comfortable accommodations and recreational activities for the soldiers waiting to return to the front. Furthermore, a free insurance for soldiers and officers was introduced. Another important innovation was the creation of officials responsible for propaganda. They were not only responsible for organizing modern and efficient propaganda among the troops but also for assisting them and evaluating the moral situation, giving the commanders in the field the information they needed to better manage the soldiers. These radical changes transformed the Italian army into a more modern and efficient one and prepared the terrain for the final offensive that started on 28 October 1918 along the Piave front. On 4 November 1918, Diaz announced the Italian victory.

After the war, Diaz was portrayed as a general who cared for his soldiers and led them to the victory. In 1923, the king appointed him “First Duke of Victory”. After serving as a senator, he joined Benito Mussolini’s (1883-1945) government in 1922 as minister of war. He reformed the Italian army and approved the constitution of the National Fascist Militia. When he retired in 1924, he received the title “Maresciallo d’Italia” from Mussolini. With this political move, Il Duce wanted to ensure the army’s loyalty. Diaz died in February 1928 in Rome.