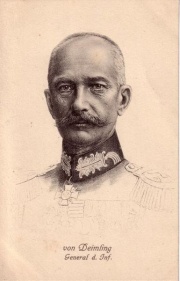 Berthold von Deimling was a controversial Prussian general known for both his military rigidity and his political inconstancy. In 1919, he converted to pacifism.

Berthold von Deimling (1853-1944) came from a middle-class family. In 1871, he began his military career and advanced to become a member of the Great General Staff (Großer Generalstab). He became widely known as a commander of the German Empire’s African colonial force in South-West Africa (now Namibia). He was jointly responsible for the extreme level of violence during the Herero and Namaqua revolts (1904-1908). At the same time, Deimling negotiated a peace contract with the rebels. As corps commander in Alsace (1913) he turned a blind eye to acts of military caprice against the civilian population, in what later became known as the Zabern Affair (Fall Zabern). Ennobled in 1905, Deimling was considered to be a proponent of the so-called “policy of saber-rattling,” was strictly loyal to the Emperor and firmly anti-democratic in his political views.

As general of the infantry during World War I, Deimling commanded the XV Army Corps on the Western Front: in Alsace, by the Aisne, in Ypres, Flanders, Verdun, by the Somme and in the Vosges. Due to his radical deployment of soldiers that resulted in great losses, he became known as the “Butcher of Ypres.” In 1915, he ordered the use of chlorine in great quantities for the first time. In 1916, Wilhelm II, German Emperor (1859-1941) awarded Deimling the medal “Pour le Mérite,” honoring his capture of Fort Vaux near Verdun. However, military failure and high-handedness caused conflicts with the Supreme Army Command (Oberste Heeresleitung). His forced early end of military service in 1917 resulted in alienation from the military establishment. However, he did not immediately abandon the military’s standpoint on the war with their calls for perseverance. Only when the course of war proved disastrous for Germany in the last months of war did he advocate for a negotiated peace and distance himself from the empire as a whole.

Immediately during the German Revolution, Deimling switched from being a militarist to being a committed republican by reason. He became a military advisor for the workers’ and soldiers’ councils, and finally a democrat and a pacifist in an attempt to compensate for his insignificance as a retired officer. In 1919, he became a member of the left-liberal German Democratic Party (Deutsche Demokratische Partei), co-founder of the Reichsbanner Black-Red-Gold (1922), member of the German Peace Society and the German League for Human Rights. Both through journalism and at partially spectacular mass rallies, Deimling warned against a second war and advocated for a general disarmament, arbitration, the fulfillment of the Treaty of Versailles and an understanding with France. His ideas about a “defensive pacifism” were headstrong and contentious inside the peace movement. He demanded that the League of Nations should form an army to have a supranational force. He opposed conscientious objection. However, ultimately Deimling remained a politicizing general without a political office. After 1933, he tried to curry favor with the National Socialists. Nonetheless, just like his former colleagues in the military, the National Socialists ostracized Deimling for his temporary pacifist commitment.