In late 1916, the Armenian and Syrian Relief Committee arranged for supplies to be delivered by the U.S. Naval Collier USS Caesar to the Red Cross in Beirut to relieve famine in Mount Lebanon. Political obstruction diverted the ship. The failure was the final effort by the Red Cross in Syria during the war.

The USS Caesar: “The Christmas Ship”↑

In the fall of 1916, the Armenian Syrian Relief Committee (ASRC, which became Near East Relief) arranged for a delivery of $250,000 worth of food, medicine and clothing to aid famine sufferers in Mount Lebanon before the onset of late winter, when prices would be highest and supplies lowest. Up until this point, the Allies had stridently refused to allow American aid to break the blockade, but through the coordination of this influential group of American Presbyterian industrialists with American diplomats, French Ambassador to the United States Jean Jules Jusserand (1855-1932), and German, Austrian and Ottoman officials, the ship was granted permission to disembark in Beirut in late December 1916. Due to its gift cargo and expected arrival date, it was dubbed “the Christmas Ship.”

Members of the American Red Cross in Beirut had organized a list of potential recipients in Mount Lebanon based on a needs assessment survey conducted earlier in the year and had arranged for the storage and protection of the cargo once it reached Beirut. The supplies were destined for the mountain because the need was greatest in the rural regions and the Wali of Beirut, Mehmet Cemal Azmi Bey (1868-1922), had prohibited aid work by Americans in the Wilaya.

The American and European newspapers that were smuggled into the country announced the coming of the aid ship, creating anticipation in the country that was to prove unfortunate when the planned delivery was canceled.

Complications and an Aborted Delivery↑

After the ship departed on 17 December 1916, Ahmet Cemal Pasha (1872-1922) issued the demand that the aid ship unload its cargo in Jaffa, where he would oversee its disbursement to those in need. This was unacceptable to the Americans, who unloaded the ship in Alexandria and sold the materials to the Red Cross for use in Salonika. Lebanon saw nothing from the shipment.

The Effects of the “Caesar Affair” in Syria↑

The Secretary of the Beirut Red Cross, Margaret McGilvary (1894-1979) observed that “literally hundreds died of disappointment.”[1] A more plausible explanation for the reported increase in deaths after reports of the USS Caesar’s diversion is that those who had taken out loans anticipating that they would receive aid were left with nothing to sell and no credit with which to purchase more food during the expensive winter months. Likewise, those who were supposed to receive aid were the most destitute, and were likely already at risk.

The American Red Cross was prevented from conducting direct aid activities in Mount Lebanon after 13 February 1917, coinciding with the failure of the Caesar mission and the deterioration of German-American relations. 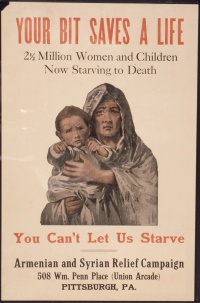 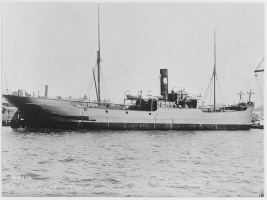