The wake of the Great War saw mobilizations against empire across the world, with many adopting the language of self-determination popularized by U.S. President Woodrow Wilson. While Wilson and the other peacemakers largely ignored these demands, these movements marked the emergence of anticolonial nationalism as a force in international affairs.

The Revolt against Empire↑

The year 1919 is often remembered as the year in which peace was restored to Europe after the cataclysm of the Great War. But the peace was only partial. Across the territories of the collapsed empires of the Habsburgs, the Romanovs, the Hohenzollerns, and Ottomans, competing claimants struggled for power, legitimacy, and recognition through a combination of diplomatic negotiations and bloody military clashes. Out of the ashes of the old order, new nation-states were emerging to stake their claim to sovereignty and self-determination.

The upheavals of this era, however, were not limited to Europe but rather encompassed much of the globe. That year saw a string of uprisings against an imperial world order, a revolt that involved violent clashes across vast parts of the world. At its heart was the principle of self-determination, advocated most notably by U.S. President Woodrow Wilson (1856-1924), who brought it into the center of global attention. After this “Wilsonian Moment” of 1919, the imperial world order never regained the relative stability and legitimacy it once possessed.

The notion of a right to national self-determination was introduced into the international debate over war aims by the Russian Bolsheviks in mid-1917. The Bolshevik leadership viewed support for national self-determination, defined as a right of secession from imperial rule, as a useful tool for undermining imperial regimes in Russia and elsewhere and gaining the support of subject peoples for the revolution. The Bolshevik call for a settlement based on national self-determination, though phrased in universal terms, was initially aimed at the left in Europe, especially in Britain, France, and Germany, where Lenin (1870-1924) hoped to help spark a revolution. The fear that the Bolshevik declaration would sway European public opinion led first the British Prime Minister David Lloyd George (1863-1945) and then U.S. President Woodrow Wilson to incorporate the promise of “self-determination” into the rhetoric of the Western allies.

Neither the Allies nor the Bolsheviks at this time saw the subject peoples of the colonial world as the audience for their declarations. Their rhetoric, however, echoed far beyond the confines of Europe. By the time of the armistice in November 1918, nationalists across the world had adopted the language of self-determination, adapted it to their own needs and circumstances, and mobilized to bring their claims to the peace conference and the world leaders assembled there.

The rapid spread of news about the war and the declarations of wartime leaders around the world depended on the expansion in communication technologies — the telegraph and mass print media — across the globe. These new means of mass communication were the vehicle for U.S. wartime propaganda carried out by the Committee on Public Information (CPI). Wilson’s wartime pronouncements, particularly his Fourteen Points Address, became linchpins of American propaganda abroad. Thus, by the time of the armistice, enthusiasm for the new world order that President Wilson appeared to promise ran high among many around the world.

Unlike India, China was represented in Paris as a sovereign state, even if its sovereignty was circumscribed by a battery of long-standing “unequal treaties” with the major powers. Chinese activists produced an avalanche of petitions and memoranda calling for a new international order based on Wilson’s wartime messages and demanding the application to China of the principles of self-determination and the equality of nations.

Koreans, too, mobilized to seize the moment. A colony of Japan, Korea had no formal representation at the peace table, but on 1 March 1919, thirty-three prominent leaders signed a “Declaration of Independence” that asserted Korea’s right to liberty and equality within the world of nations. Thousands streamed into the streets to cheer Korean independence. Over the following months, more than a million people participated in protests across the peninsula. Though the Japanese authorities engaged in a campaign of suppression that left thousands of casualties, the March First Movement, as it came to be known, signaled the first mass uprising in the history of Korean nationalism.

Around the same time, a group of prominent men in Egypt, then a British protectorate, demanded to head for Paris to stake a claim there for self-determination. When the group was refused permission to travel, it mobilized protests in the streets and launched an international campaign for its cause. The British authorities arrested its leadership, sparking a wave of strikes and demonstrations across Egypt, precipitating what came to be known as the “1919 Revolution” and marking a watershed in the Egyptian struggle against British rule.

British efforts to suppress rising protests in India had similar results. Mohandas Gandhi (1869-1948), who had campaigned to recruit Indians for the imperial war effort, now emerged as a leader of the resistance, calling for a nationwide strike. The colonial authorities responded with violence, most infamously with the killing on 13 April 1919, of some four hundred unarmed civilians gathered in Jallianwala Bagh in the Punjab city of Amritsar. The Amritsar Massacre became a symbol of British oppression and augured a new era of Indian resistance.

By that time, however, it was becoming clear that the Paris Peace Conference, rather than constructing a new world order based on self-determination, was largely aiming to restore the old imperial one, at least outside of Europe. When, on 4 May 1919, it emerged that Chinese hopes in the conference were to be disappointed, protests and strikes spread throughout the country. Like the other upheavals across the colonial world, the May Fourth Movement marked a defining moment in the evolution of resistance to the imperialist world order.

Toward a New Order↑

Though the peace settlement of 1919 allowed the victorious empires to expand their domains as never before, it also marked the beginning of the end for the imperial world order. After 1919, empire as a principle of international order faced a series of challenges of growing intensity. The League of Nations Mandate System, almost despite itself, entrenched for the first time in the international arena the idea that progress toward self-determination should be the goal of colonial rule and the yardstick against which it is measured.

The resistance to the imperial order continued to spread through global depression and war, culminating with the radical restructuring of international society in the decades after the Second World War. The revolutionary idea of 1919, that of an international order predicated on notionally equal, self-determining nation-states, was codified in the structure of the United Nations. Power relationships in the international arena, of course, remained unequal. But the remapping of a world of empires into one of nation-states over the course of the past century has transformed power's territorial configurations, modes of operation, and discourses of legitimacy in far-reaching ways. 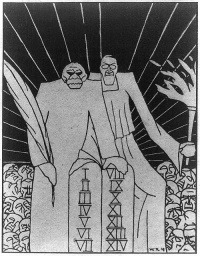