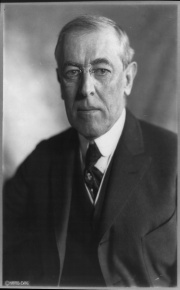 Thomas Woodrow Wilson was the twenty-eighth president of the United States (1913-1921). Wilson unsuccessfully attempted to bring the belligerents to the negotiating table, but in 1917 reluctantly concluded that the U.S. should join the war as an “Associated Power.” His attempts to create a lasting peace created the League of Nations, but failed to prevent another world war.

As the European powers declared war on one another in the beginning of August 1914, Woodrow Wilson (1856-1924) declared America’s neutrality while sitting at his wife’s deathbed. He asked Americans to be neutral “in thought” as well as in action. U.S. public opinion was divided along both regional and ethnic lines; German Americans tended to support the Central Powers, while pro-Allied sentiment was strongest in the Northeast, which had the closest economic and social ties to Britain.

Neither the Allies nor the Central Powers fully respected the rights of neutral nations, especially when it came to trade. Britain controlled the Atlantic Ocean, blocking most American trade with Germany. Berlin resorted to the use of submarines to blockade the Allies, and Wilson increasingly found himself dealing with both sides’ violations of U.S. trade rights. The key difference between the parties however, was that although Britain’s seizing of American cargoes and black-listing American companies for trading with Germany violated American’s neutral rights, it did not cost American lives. German submarine warfare, in contrast, not only destroyed U.S. cargo, but often also killed U.S. citizens. The most notable example of this was the sinking of the British luxury liner Lusitania in May 1915. Torpedoed by a German submarine off the southern Irish coast, the massive ship sank in minutes, killing 1,200 people, including 128 Americans. The American public was outraged, but Wilson refused to lead his divided nation into war. He demanded that Berlin obey international laws governing commerce raiding, including protecting civilian lives. Wilson eventually received the reassurances he demanded and Germany momentarily changed how it conducted submarine warfare.

While dealing with German submarines, Wilson was simultaneously handling the “preparedness” campaign at home. The U.S. had only a small army and was unprepared to join the war in Europe. In response Wilson supported increasing the size of the U.S. military as well as an accelerated naval building program. Wilson’s preparedness efforts were not wide-ranging enough to satisfy his critics, but they alarmed those who opposed the U.S. entering the war. This balancing act would continue through the election of 1916. The war was an issue in the presidential campaign, but Wilson focused on his domestic accomplishments. The American economy was booming from arms sales to the Allies, and Wilson had supported an impressive list of domestic reforms. However, the slogan “He kept us out of war” struck a chord with the public and became the theme of Wilson’s campaign. It was not meant to be a promise to keep the U.S. out of the war in Europe, only a reminder that the U.S. had avoided war thus far. Republican Charles Evans Hughes (1862-1948) ran a poor campaign and Wilson won a narrow re-election.

After his re-election Wilson turned his energies to peace-making. He sought to convince the Allies and the Central Powers to reach a negotiated peace, one that would include an international organization. Neither side responded favorably to his request that every belligerent nation assert what it wanted from the war. By the end of 1916 the war had gone on too long, too much blood had been spilled, and too much money had been spent for either side to agree to a negotiated peace, or a “Peace Without Victory,” as Wilson phrased it in a peace plan he proposed in January 1917.

U.S. Entry and the Home front↑

By early 1917, Wilson was torn between two contradictory desires: to keep the U.S. out of the war, and to negotiate an end to the fighting. Neither the Allies nor the Germans wanted the U.S. to act as a mediator, but as a belligerent Wilson would earn a place at the table. Finally, Berlin’s decision to restart unrestricted submarine warfare and the Zimmermann Telegram convinced the Wilson administration that the U.S. should enter the war. On 2 April 1917 Wilson reluctantly asked a special joint session of congress to declare war on Germany. Wilson famously called for the war “to make the world safe for democracy.” Wilson prophetically told a friend that if the U.S. entered the war he feared the American people would abandon tolerance. Ironically, at home, the war to protect democracy was indeed marred by a growth of repression. Many forms of political dissent were banned as impediments to the war effort.

American troops began to reach the front in late 1917. In January 1918 Wilson presented his “Fourteen Points,” which echoed his “Peace Without Victory” proposal. They included an independent Poland and a League of Nations to prevent wars in the future. The Fourteen Points became the basis for what Wilson hoped to achieve at the post-war peace talks. When the fighting ended the Allies quickly began to prepare for a peace conference to be held at Versailles. Wilson decided to personally attend the conference. He was greeted as a hero by huge cheering crowds inspired by his idea of national self-determination, which seemed to suggest independence for new nations. The leaders of the other powers, however, were not as enthusiastic about the plan. Wilson had to compromise to win support for the League, although he had little sympathy for Germany, and so did little to moderate the Allies’ demands. Finally he supported an imperfect treaty as the best possible outcome under the circumstances. The League would, Wilson thought, be able to fix any remaining injustices.

The treaty was met by a hostile U.S. Senate. A majority supported it, but it needed a two-thirds vote to pass. While the “Irreconcilables” refused to vote for the treaty, the “Reservationists” were willing to support the treaty with some addendums. Wilson’s stubborn streak resurfaced, and he refused to make any changes. With the treaty stalled he went on a public speaking tour across the U.S. The strain of giving long speeches, however, took its toll, and Wilson neared collapse. Returning home Wilson suffered a major stroke. There was no clear mechanism for removing an ill president, and his administration was left adrift. Wilson continued to refuse to accept any reservations, and the Senate rejected the treaty.

One of the most controversial aspects of Wilson’s administration was race. He was a white supremacist and supported segregation, ostensibly for the benefit of “both races.” This has made him a controversial figure a century after the war, but, sadly, it put him well within the mainstream of white Americans in the 1910s. Indeed, many, such as author Thomas Dixon Jr. (1864-1946), went further and declared African-Americans’ mere presence in the nation a danger. Wilson was a paternalistic racist: he saw blacks as a “childlike” race who would be ready for full citizenship rights in the future. Such opinion was widespread among Americans in both major political parties, but because Wilson’s democrats had their strongest base in the Jim Crow south, his administration went far further in advancing segregation than did his republican predecessors, who still counted on black votes in northern cities. Wilson’s administration segregated most federal offices and demoted most black supervisors within federal service. This had little effect on the US military. The army and navy were already segregated and the marines did not accept blacks.

During the war, the military placed drafted African-American men into segregated units, most of which were relegated to menial duties. Of the few “colored” units that saw combat, most General John Pershing (1860-1948) had loaned to the French with warnings not to treat their new comrades as equals. Wilson was not responsible for enacting these policies, he let the military run its own affairs, but neither did he object or intercede. When race riots in the United States during the war led to numerous deaths of African-Americans at the hands of white mobs, Wilson’s statements abhorring the violence were bland and formulaic. The best that could be stated about his attitude was that at least, unlike some members of congress, he did not blame the victims for inciting the violence.

At the Versailles talks, Wilson’s vision of proper race relations affected the final result. Non-European peoples’ demands for self-determination were met with indifference compared to the support given to the Poles and Czechs. Wilson and British Prime Minister David Lloyd George (1863-1945) helped kill the Japanese request for a racial equality clause in the treaty. This was no doubt in large part due to race, but also because of Wilson’s fears that such a clause would lose the treaty up to eight vital votes in the U.S. senate from western states where anti-Japanese sentiment was especially strong. The mandate system that assigned former German colonies to European powers as protectorates was based on racist assumptions about the ability of some populations to govern themselves. It also placed these pseudo-colonies under supervision of an international body and required the powers in control to prepare their charges for independence. Wilson asserted that there were no peoples on earth that were not capable of self-government, if properly prepared. However, his vision of race and white supremacy manifested itself in the assumption that the non-white races were, for the moment, still in training both at home and abroad. He believed the duty of the powers was to guide the non-white peoples’ preparation for independence, not to place themselves in the role of permanent master.

Wilson’s legacy is a chaotic mixture of realism and idealism. He entered the war in part to create an international organization. The League was founded, and Wilson even received the Nobel Prize for its creation. However, Wilson’s own stubbornness prevented the U.S. from becoming a member and the League was unable to prevent future wars. He declared that the war was fought to protect democracy, but his administration's repressive policies at home stifled dissent and increased segregation. Wilson’s idealism and the hopes it engendered also made him the central figure in how the Versailles Conference is remembered, even though he was but one of the major leaders responsible for the treaty. His legacy is thus of being one of a group of all-too fallible leaders who were overwhelmed by the task before them; that of reconstructing a new world that would not repeat the mistakes of the past. His ideals nonetheless continued to animate American foreign policy throughout the 20th and 21st century. 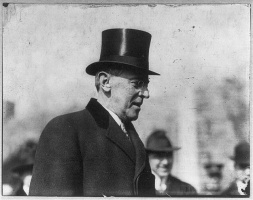 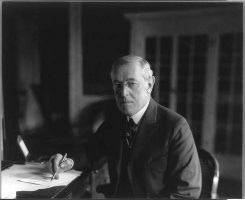